Sexual harassment is a constant for more than half of women journalists in Venezuela, according to report

In June 2020, when some countries were still under quarantine due to COVID-19, a group of 14 women journalists came together virtually because of a need to find a space where they could share resources, opportunities and also discuss the incorporation of a gender perspective in journalism produced by Venezuela’s media. 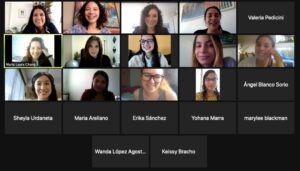 Virtual meeting of the Network of Venezuelan Women Journalists (Screenshot)

That was the official emergence of the Red de Periodistas Venezolanas (Network of Venezuelan Women Journalists), which is currently a diverse group of more than 150 women journalists, inside and outside of Venezuela.

In that first meeting, when they began to discuss what issues were important to the attendees, the conversation about workplace harassment emerged.

"Curiously, all the journalists had one or two stories to tell despite being, in many cases, from different generations. So we thought that in order to solve this problem it was necessary to measure it," journalist Maye Primera said during the Nov. 25 presentation of the report "Sexual harassment against journalists in Venezuela,” the first publication made by the network. Primera was in charge of editing the investigation. 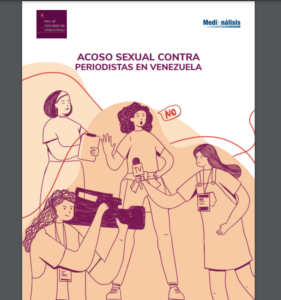 Cover of the report "Sexual Harassment against Journalists in Women"

The main finding of the report from the Network of Venezuelan Women Journalists is that 45 percent of those surveyed claimed to have suffered sexual harassment, bullying or aggression in the workplace. However, many of the journalists who answered "no" to the related question later confirmed with other answers that they had indeed suffered harassment.

For the report, which was published in partnership with the organization Medianálisis, 111 women journalists from all over the country of different ages, positions and media were surveyed anonymously. They were mostly women between 25 and 35 years old and employees at digital media outlets. To carry out the survey, the Network of Venezuelan Women Journalists was inspired by an instrument to measure harassment in Mexican newsrooms, called Acoso Data, created by the collective Las Periodistas Unidas Mexicanas (PUM, or United Mexican Women Journalists).

“We approached them to bring that experience to Venezuela. We believe that harassment is not a topic of conversation yet in the country,” Primera said during the virtual presentation.

LatAm Journalism Review (LJR) interviewed Estefanía Reyes, one of the editors and investigators of the report, regarding what the network hopes to achieve with this publication.

“At first, we wanted to name a discomfort that most women journalists have felt. Second, to show that it does not happen to one or two of us, but that it is a systematic and widespread problem. And, recognizing both, to influence the creation of State and business policies that lead to safe work spaces for women journalists, especially, but also for women in all professions,” Reyes said.

Harassment as a form of censorship

Also, almost a quarter have received phone calls, messages or emails with sexual connotations without your consent or have been asked to dress "feminine" or "attractive" for certain events or meetings.

“The following figures confirm that the forms of verbal harassment are the most frequent and, therefore, also the most normalized. While those forms of harassment that involve physical attacks or more explicit requests are less frequent,” according to the report.

"I had to quit work because my boss was determined that I had to have something with him. Initially I believed that I could deal with it, I was elusive and avoided him, but there came a time when it was unbearable how he looked at me, how he did things so that we were alone. It was unbearable, I quit work." (Screenshot of anonymous testimony featured in the report)

The reasons, the report estimates, could be because photojournalism is a field mainly made up by men. Therefore, women photographers must break through and coexist in environments governed by male power dynamics. Similarly, they tend to spend more time on the streets, often in conflict situations, where the risk is greater.

The report also highlights how harassment can affect job performance and change the lifestyle of those affected.

Forty-two percent of those surveyed who suffered harassment decided to take protective measures such as: ceasing to cover certain institutions in the face of threats from collectives and officials who sexually harassed, bullied or attacked them; refraining from going to certain places or pursuing any type of information for fear of unsolicited sexual advances from sources; changing their wardrobe to more masculine garments so as not to attract attention; pretending to have a partner as a deterrent strategy; changing beats or resigning from their jobs.

“We women see harassment as a form of censorship as well and a censorship that is exercised from many sides: State, government, workplace, etc. It is a type of behavior that is normalized. The fact that some women colleagues stop covering certain beats or stop working in certain places or have to assume a permanent defensive attitude because they do not feel comfortable is censorship and affects the right of audiences to have these voices," Maye Primera said in relation to the subject.

The Network of Venezuelan Women Journalists defines, in its report, workplace harassment as any verbal, non-verbal or physical behavior of a sexual nature or other behavior based on sex, which affects the dignity of women and men, which is unwanted, is unreasonable and offensive to the recipient and ends up affecting their work.

However, for many respondents it is not easy to recognize the limits of harassment.

The creators of the report assure that, although the result of the survey shows that 45 percent of the journalists have been subjected to some type of harassment, the number is actually higher because many of the women journalists who answered "no" to the question 'In Venezuela, have you experienced or are you experiencing any situation of sexual harassment, bullying or aggression in the workplace (inside or outside the company's facilities)?'  later confirmed with answers to other questions that they had actually suffered harassment.

Therefore, they affirm that sexual harassment is a constant for more than half of women journalists in Venezuela.

“It is difficult to recognize harassment because it is an intrinsic characteristic of the way that men have historically learned to relate to women and vice versa. It is a practice rooted in the inequality of power in terms of gender and is so normalized that even women find it difficult to recognize it as a form of violence. Among other things because, in doing so, we are branded as exaggerated, conflictive or problematic in the labor context,” Reyes said. 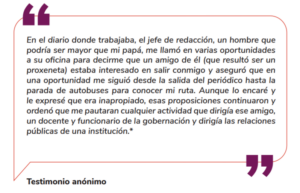 "In the newspaper where I worked, the editor-in-chief, a man who could be older than my father, called me several times at his office to tell me that a friend of his (who turned out to be a pimp) was interested in dating me and assured that on one occasion he followed me from the newspaper to the bus stop to find out my route. Although I faced him and expressed that it was inappropriate, those proposals continued and he ordered that they assign me to cover any activity directed by that friend, a teacher and government official and who directed the public relations of an institution." (Screenshot of an anonymous testimony featured in the report)

In Venezuela, at the end of April 2021, starting with the # YoSíTeCreo (I believe you) movement, a phenomenon similar to the U.S. #MeToo campaign, some media began to create protocols for abuse/harassment in newsrooms. However, it is not a common denominator.

According to Reyes, there is a lot of reluctance on the part of media leadership to address this issue in a meaningful way and with the urgency it deserves.

“I think it partly responds to the fear of opening a Pandora's box because, although they do not openly acknowledge it, they know that this is a reality present in all newsrooms. Secondly, there is also a fear that in an authoritarian context of criminalization against independent media, this issue will be used as one more instrument of persecution,” the journalist said.

The Network of Venezuelan Women Journalists, after the presentation of this report, hopes to create efforts so that all newsrooms and media companies in the country have a protocol against harassment, designed with a gender perspective, as a first step to build a culture of zero tolerance for harassment and sexism.