Uruguay has always served as a benchmark in terms of freedom of expression. No journalists have been murdered, kidnapped or persecuted, unlike in other Latin American countries.

However, the eight monitoring report carried out by the Center for Archives and Access to Public Information (Cainfo, by its Spanish acronym) recorded 69 threats and restrictions to journalists' freedom of expression in the last year in that country. This means an increase of 40 percent over the previous year and a rise in the number of cases for the third consecutive year. 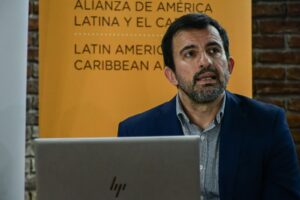 “In this report, the number of criminal or civil lawsuits against journalists is higher than in all previous reports combined,” Fabián Werner, president of Cainfo, said. (Photo credit: Cainfo - Jeannie Margalef)

"Uruguay, both in this comparative report and in most of the reports on press freedom, continues to be one of the best in the region. I think we are next to Peru in the number of cases. But, both they and we have begun to get more complicated or to increase the number of risk situations, which is worrying," Fabián Werner, president of Cainfo and director of the digital news outlet Sudestada, told Latam Journalism Review (LJR).

Caninfo, currently a member of the network Freedom of Expression Exchange (IFEX) and the Regional Alliance for Free Expression and Information, has been monitoring the issue since 2014. The latest report covers the period from April 1, 2021 to March 31, 2022 and incorporates the updated methodology and indicators of the "Voces del Sur" network, an alliance of civil society organizations that defend freedom of expression.

The categories in which the most cases occurred in the past year were restrictions on access to public information and criminal or civil proceedings, each with 19 recorded instances. "Our greatest concern is the increase in prosecutions of journalists. This is a regional trend that we have seen in other countries. In this report, the number of criminal or civil lawsuits against journalists is higher than in all previous reports combined," Werner said.

"There are cases that we did not include in the report at the request of the people affected. One of them was a lawsuit that was finally made public: the lawsuit of a former official against a newspaper for US $450,000. That is to say, since we released the report (May 3) until today, the number of cases has already increased," the journalist said.

Werner was among those targeted and was also included in the report. In July 2021, he publicly denounced the robbery he suffered at his home where only computer equipment (two computers and a removable disk) belonging to him and his partner María Natalia Rodríguez, both journalists, was stolen.

As reflected in the report and confirmed by Werner, the incident was reported to the police who took a statement of what happened but, to date, have not informed the victims of any steps taken to confirm or rule out that the theft was related to their journalistic profession.

No cases were recorded in this report in the categories of murder, forced disappearance or arbitrary detention. However, for the first time, five episodes were recorded on Internet restrictions.

The stigmatizing discourse by public officials also had a significant increase in the alerts, especially due to actions by the National Party senator, Graciela Bianchi. This official has a systematic practice of stigmatizing and threatening journalists on Twitter. "She says she is investigating journalists who are part of a kind of conspiracy against the government. The worrying thing about this is that no one from the government is coming out to say 'no, we do not agree with this practice,' which is something that should happen in any democratic country," Werner said.

Cainfo's team said that in the last few years there has been an improvement in their ability to detect and review complaints. This has come hand in hand with the organization’s integration in Latin American networks of freedom of expression and the monitoring of threats.

The Uruguayan government, under Luis Lacalle Pou, has promoted legal reforms that, according to Cainfo, are a step back in terms of human rights and affect freedom of expression.

In 2020, the Law of Urgent Consideration (LUC) was approved, which included reforms to restrict access to information from the State Intelligence Department and which also criminalizes social protest and affects the right to strike.

"A reform to the Access Law was also approved through a budgetary mechanism that blocks the access of the media to certain types of information that the obligated entities must display on their web page. At the same time, the discussion at the parliamentary level of a bill to regulate the official advertising of the State was prevented. In other words, clear and consistent steps have been taken against freedom of the press," Werner said.

There are other bills or reforms that have not yet been approved but are a cause for concern. The report warns, among other things, that the government coalition wants to include in a new media law a mechanism to control media content. "The idea is that the "impartiality" of the "political information" published in the media be controlled, through the application of sanctions and fines," according to the report.

"Many of the threats and violations come from the State. This is worrying because the State should be the main guarantor of freedom of expression and freedom of the press. That is why in this report we show that there is an increase in stigmatizing discourse and there are some people who undermine the work of journalists and question the veracity of what is being reported," Andrea Cammarano, a journalist at the Communication Unit of the University of the Republic in Uruguay and a consultant for the report in the area of gender, told LJR. 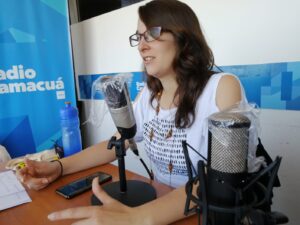 “Many women journalists normalize the attacks they receive. We lack a lot of information, training and to make this problem visible,”Andrea Cammarano, consultant for the report in the area of gender perspective, said. (Photo credit: Courtesy)

In this report, Cainfo includes for the first time a gender alert as an intersectional indicator. According to the text, the organization believes it’s important to make visible and document the cases of threats to freedom of expression linked to gender or the sexual orientation of journalists.

After analyzing data from previous reports, Cainfo hypothesized that the cases of women victims of restrictions to freedom of expression recorded did not correspond to the incidents that had occurred, and tried to figure out the reason for the underreporting.

"Many women journalists normalize the attacks they receive. We lack a lot of information, training and to make this problem visible. In Uruguay we are far behind on this issue, compared to neighboring countries such as Argentina, for example. Many women do not find safe places in which to speak out and we do not recognize when we are suffering an attack. We think that, because we are journalists, we have to put up with it," Cammarano, who wrote a whole chapter on gender perspective together with journalist Lucía Silveira, told LJR.

The report pays special attention to the attacks on women journalists through social media, specifically Twitter.  According to the report, Information and Communication Technologies (ICT) have characteristics that give new forms to gender violence such as viralization, anonymity, persistence, and replicability of an attack.  So much so that the United Nations (UN) considers these online attacks as gender-based violence.

"I believe the state of freedom of expression in Uruguay is on alert. It has always been said that Uruguay is a model case because we do not have serious cases, compared to other countries in the region. But, I would like to rescue something that the rapporteur Pedro Vaca said in the presentation of the report: this is precisely why we have to take care, now more than ever, that Uruguay continues to be a benchmark in terms of freedom of expression," Cammarano said.