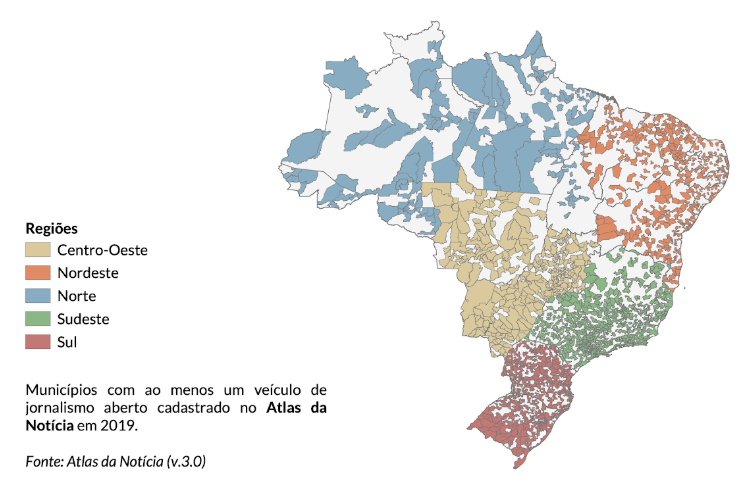 This is one of the key findings of the latest issue of the Atlas da Notícia (News Atlas), a project by PROJOR – Institute for the Development of Journalism – in institutional partnership with Abraji, Intercom and 22 journalism schools in the country, and with the support of Facebook Journalism Project (FJP).

The work is inspired by Columbia Journalism Review's project America's Growing News Deserts, now in its third edition. This third edition of the Brazilian Atlas reveals the existence of 11,833 news media in the country in all media: print, digital, radio and TV.

However, these media have an uneven distribution in the territory, so much so that in 60 percent of Brazilian municipalities, there is not even one outlet. Of the five regions of the country, the Northeast stands out negatively.

“The Northeast had the highest proportion of news deserts among the Brazilian regions. 73.5 percent of the northeastern municipalities were classified as deserts. This means that in these places there is no journalistic coverage on local matters, of public interest, such as city hall spending, lack of medicine at the health clinic, the quality of school meals,” journalist Mariama Correia, an Atlas da Notícia researcher in the Northeast, told the Knight Center.

She also points out that 2019 was a very challenging year for northeastern journalism, with the deepening of the print media crisis and mass layoffs of journalists.

“It is a reality that represents a huge challenge to combat disinformation in the region. We know that, given this lack of information produced with journalistic criteria, such as a good investigation, for example, news circulating on social networks, such as Whatsapp, end up being the only sources of information for the population,” Correia said.

“The data now gathered by Atlas da Notícia researchers, supported by 193 volunteer contributors from journalism schools in the five regions of the country, is a consistent basis for researchers from all over Brazil to guide further investigations,” said journalist Sérgio Lüdtke, who coordinated the work teams in the five Brazilian regions, according to a project press release. “This data will allow us to detect the paths most recently taken by journalism and to identify community needs and future opportunities that open up for professional journalists in Brazil.”

The Volt Data Lab has researched, analyzed and mapped this edition of the Atlas, which also includes the publication of an  AP (Application Programming Interface) to facilitate access and use of information generated about the presence of news media in the 5,570 Brazilian municipalities. According to Sérgio Spagnuolo, who leads the Volt Data Lab, the construction of the Atlas API is unprecedented in Brazilian journalism.

"This is a feature widely used by technology companies, but still little implemented within the journalistic segment," he said, according to the project press release. "This tool will enable application implementation, automation of analysis and graphics and facilitation of the use of Atlas data by researchers."

“The third edition of Atlas da Notícia reaffirms Projor's commitment to generate data and analysis that are indispensable for initiatives aimed at strengthening the local Brazilian press in the face of the challenges brought about by the digital revolution,” said Francisco Belda, Projor's president.