‘We must continue working on denouncing and reducing current censorship, without immolating ourselves’: 5 questions for Venezuelan cyberactivist and journalist Luis Carlos Díaz

Anyone involved in Venezuela's social media ecosystem knows about Luis Carlos Díaz.  The Venezuelan-Spanish cyberactivist and journalist, who bills himself as a "son of the Internet," showed the power of weaving networks on the Internet when he suffered an enforced disappearance in 2019.

On March 11, 2019, as Venezuelans were recovering from the blackout that disconnected the entire country for several days, Diaz failed to arrive at his job at Unión Radio station in Caracas. His wife, activist and writer Naky Soto, activated a campaign on social networks with the hashtag #DóndeEstáLuisCarlos that trended in 12 different countries. 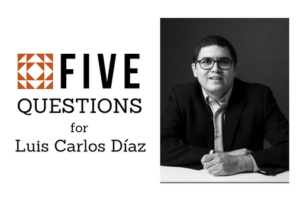 The journalist was detained by officials of the Bolivarian National Intelligence Service (Sebin, by its Spanish acronym), Venezuela's political police, for allegedly being involved in the national blackout. The evidence used against him was a video published three weeks before where Díaz and his wife explained to their audience how to stay in touch in case of a possible Internet blackout in the country.

While a strong social media campaign for his release was taking place, Diaz was released the day after his arrest but was placed under precautionary measures. These remained in place until Feb. 1, 2022, when his case was shelved. For almost three years, the journalist lived under a regime of presentation, which includes court appearances every eight days, a prohibition to leave the country, to participate in protests, and to testify about what happened.

LatAm Journalism Review (LJR) invited Luis Carlos Díaz to participate in its "5 Questions" series to learn more about his case, his plans for the future, and to understand the situation of the media and journalism in Venezuela today.

(*This interview has been edited for length).

LJR: Venezuela has been somewhat sidelined from the Latin American media scene due to the Covid-19 pandemic, the slight economic stability it is experiencing and the crises in other countries in the region. How would you describe being a journalist in Venezuela today?

Luis Carlos Díaz (LC): We are living in a period of negative peace. A journalist is condemned to see everything happening at the same time, but can only tell a few stories. After years of conflict, the strongest force imposed itself using repression, censorship and state terrorism practices, until it crushed a good part of society. After hijacking all institutions and increasing social control over the population, Venezuelans live among the ruins and now it’s also been displaced from the world's spotlight. In this false peace there have been economic rearrangements, political domestication [people originally from the opposition that end up collaborating with the government to coexist or survive] and many complicities inside and outside the country [regarding the response or lack of it from the international community], because as the chances of challenging those in power to recover democracy have diminished, some actors have chosen cynicism to continue living under these new conditions. Others remain persecuted, exiled, vetoed, or under threat.

This negative peace means silencing and censorship. In Venezuela, newspapers have disappeared and there are very few independent or critical spaces left on radio and television. The main web pages are blocked by the State and dozens of people have had legal proceedings opened against them for content published on the Internet. The damage has not stopped.

LC: I always present myself as a cyberactivist and I stand by it. I grew up on the Internet. It’s been the space in which to grow in since before I started college. I’ve been teaching digital literacy and communication strategies for almost 20 years. While doing so, I’ve been able to travel to dozens of countries, more than I have traveled to as a journalist. I work for the right to a free Internet and I care about defending freedom of expression online, digital security and the ability of the citizens to organize, be informed and avoid censorship. That is my activism and I don't see any conflict between that and journalism. On the contrary: it has helped me to train many news outlets and countless non-governmental organizations (NGOs) inside and outside Venezuela.

LJR: You have always talked about the importance of social media to build citizenship and create community. What weight did your network of followers have in the course of your detention and the precautionary measures that were later imposed on you?

LC: While in detention, I was thinking about two things: who would take care of my wife, who had been undergoing cancer treatment for more than six months, and how my friends would find out. I was not being held in a police station, as the average reader might think, but was being held disappeared, incommunicado and hooded in a clandestine torture center. A UN mission has determined that several such centers exist in Caracas.

While there, I worried about who could warn whom, when they would miss me because I didn't make it to the night shift at the radio station or to my house, how would people communicate if the country already had five days of accumulated blackout or if there would be any echo outside. In my head I went over all the people I knew and felt that without electricity all those light bulbs would be out. But in reality they were lit because they managed to connect and act.

There were those who prayed in their different religions to those who blew up the phone calling different ambassadors and even Chavismo folks to ask for me.

In 2017 alone I reported for more than 15 news outlets abroad during the protests. All of them remembered me. I have attended three times the Knight Center’s journalism symposium in Austin and wondered if anyone would inform Rosental Alves (it turns out he knew and had warned the region). Also, at the European Parliament they raised their voices for me, while I was lying in a filthy cell. The office of the UN High Commissioner for Human Rights received the information from my fellow human rights defenders and put pressure from there.

Then many more went to the Prosecutor's Office to protest for me, even though they had been in the dark for days. The NGOs, the radio stations on duty, the works of the [Catholic] Church [Jesuit denomination] with which I worked for years, and even the parents of my schoolmates protested in Charallave [a Caracas' suburb], even though my parents no longer lived there. That day I was the son, the nephew and the grandson of many people. That showed the power of the networks, of our capacity to weave them and link ourselves together. Because the Internet didn't shut up either. Students, followers and friends became active. Who got me out of prison? All of us together. There is no other explanation. However, in Venezuela there are still hundreds of political prisoners and almost 10,000 people are being under precautionary measures in court.

For me that network meant not only my freedom but also the accompaniment in the years that followed, because they gave meaning to my life. The network for me is almost the same as for a tightrope walker in the circus: it is what supports you when you fall. I can only repay so many people by working.

LJR: The day the case against you was shelved in court, you tweeted: "It means that we achieved the cessation of the measures that restricted my freedom and affected my life and that of my family, but I am still at risk." Why, despite the risks, did you decide to remain in Venezuela?

LC: Because we feel like it. And if someday we leave, I hope it will also be because we want to. Not because they exile us, as so many beloved people have suffered. Exile is another painful prison. But more specifically, we decided to stay because the doctors who treated my wife are here. It made no sense to leave across the border after having been robbed, persecuted and in such a vulnerable situation. We also stayed because this is our home and our lifelong project. I am Spanish, I could settle in Europe, but the things I want to do, the conflicts I want to denounce and resolve, are here. I feel that these problems are my problem, and I will continue to insist on doing everything possible to build a solution or at least report it.

Something we did not have in 2019 and that now Venezuela does have is a Fact-Finding Mission at the UN, which is gathering cases, and an investigation for crimes against humanity opened at the International Criminal Court. It is a road that will take years, but it is important that we continue that journey in order to have peace and justice.

LJR: You were silenced for three years. What does Luis Carlos Díaz have in mind for his new future in freedom?

LC: I work in layers so I don't get bored. Also because I don't know anyone who can make a living from only one job in Venezuela. I am about to present research on journalism and transitional justice [judicial and political measures used as reparations for massive human rights violations] that will allow me to think about the future, about the challenges we’ll have in a Venezuelan-style transitional justice process. Then I would like to connect that with international criminal justice, because Venezuela is the only country in Latin America with an investigation in the International Criminal Court, so we will have to learn from other distant countries and their experiences.We must work this line to be translators of the complex.

At the same time, I continue to help strengthen the work of human rights and media organizations in Venezuela. We have a hostile context that is already problematic to work in, but that threatens to become a disaster like Nicaragua's. We need containment strategies so that we do not reach that scenario, nor that of Mexico, Honduras or Colombia, which are dangerous for journalists and [human rights] defenders. However, this false peace in Venezuela is also unacceptable and breeds enormous social damage. That is why we must continue working on denouncing and reducing current censorship, without immolating ourselves.

And, last but not least: I have a backlog of many trips. The court's prohibitions made me officially lose eight trips, a scholarship, conferences, jobs, contacts, income and even the possibility of visiting my family when they were going through a medical emergency. Many of these things cannot be recovered, but I do know that I can work from here on out and reach for new ones.