Last Jan. 22, Eunice López, a Honduran radio announcer at Radio Honduras and TV anchor at TN5 Telenoticias, tried something different in her TikTok profile: a challenge. It consisted of López proposing that her followers try using a teleprompter to see how well they could perform as presenters of a news story. The outcome was undeniable.

A screenshot of just a handful of the TikTok users who responded to Eunice López's teleprompter challenge.

After almost 6 million views and counting, half a million likes, almost 7,000 comments and more than 19,000 shares to other apps, López was flabbergasted. The raw numbers were not only huge, but the interactions sparked by her followers, and even famous people in her country and abroad, were also significant.

Even though TikTok makes it difficult to know for sure the first time someone promoted the challenge – its algorithm is not chronological – López seems to be one of the first who tried it. And, apparently, it all started due to a heavy dose of curiosity.

“I think it was the result of so many times that people asked me how I could say the news on television so well, and how I was able to learn all the news items without making mistakes,” López told LatAm Journalism Review (LJR), remembering one day when she was on a commercial break and, suddenly, decided to try. "Ok, I will record this text, and see if anyone wants to read it.”

Beyond Honduras, the prompter challenge  – #teleprompterchallenge or #prompterchallenge – gained even more traction in the last few months. Journalists from all over the world (from Brazil to México, from the U.S. to Switzerland) also participated, presenting a crucial part of news anchoring in a lighter, funnier, and, overall, more palatable way.

It has been small and seemingly mundane posts like these that might be helping create a bridge with core TikTok users: young people, who according to a recent survey in developing countries reported on by LJR, are generally more skeptical of news on the internet.

Since its release, the video-sharing social networking app has seen a skyrocketing emergence in popular culture, especially in 2020 and 2021. The app has approximately 689 million global active users, with an estimated 64.4 million in Mexico, Brazil and Argentina. Sixty-two percent of U.S. users are under the age of 30. Those on the app use it for an average 45 minutes a day. Journalists and publishers, however, have been cautious to embrace it. Yet, the few who have been exploring it see the need to, among other things, not to take themselves so seriously.

TikTok can be seen as a mish mash of many social media platforms, and it definitely shows. Amidst a kaleidoscope of visual possibilities for creators like singing duets, replies in form of content posted in the comments, lip-syncs, green screen effects, filters etc., journalists and media outlets are presented with a diverse set of tools that distinguish the app from others.

“There is an abyss between TikTok and Instagram, at least for me. TikTok is way harder. Is not as simple as it seems,” Guilherme Amado, a Brazilian political columnist at Metropoles, told LJR. He was one of the first in his area to create a profile on both apps.

“There are videos in TikTok with high production value that take days to make. The app allows the emergence of complex pieces of work, which is one of the big advantages of the app,” he said. “It opens a wide window for artistic expression, requiring the development of sophisticated audiovisual tools.”

Due to this heavy emphasis on visual elements and the fact that its algorithm surfaces what is popular – and not what´s new – many researchers see the app´s genes as incompatible with hard news journalism.

“TikTok is not a natural fit with breaking news,” Corinne Podger, a media development consultant, told LJR. “But, it is perfect both for evergreen stories, and for building a personal and brand identity that your future audiences will hopefully remember when they are old enough to consider subscribing to a news provider.”

One such reference is the Washington Post TikTok account managed by Dave Jorgenson, which has almost 1 million followers and a very prolific, quirky, and self-conscious persona.

“It’s very much a personality-based platform and there’s no way around that,” he said in an interview with LJR, noting that he has some advantages, and some warnings, in his back pocket, “like being able to edit and knowing my way around a camera. But, you cannot edit your way out of a disingenuous personality.”

These particularities have made it hard for journalists and publishers to take the lead, especially since the app still does not have convenient tools for publishers, like a hyperlink function that can send the user directly from a post to a breaking news story.

The tide, however, seems to be changing, observes Noelia Gonzalez Pereyra, an Argentinian social media manager and a marketing professor at Universidade Católica de Córdoba.

“Latin American journalists are understanding the need to use TikTok as a more direct way to reach that young audience that uses entertainment as a communication tool,” she told LJR..

The numbers, nonetheless, are still low. A crowdsourced list of publishers and journalists on TikTok, managed by Italian journalist and senior social media editor of The Telegraph, Francesco Zaffarano, counts only eight instances of news endeavors using the app in Latin America among 194 entries. There were none in the Caribbean. Even though LJR was able to find other entries, the numbers do not rise above 33, with 19 from publishers and 14 from journalists in Latin America. 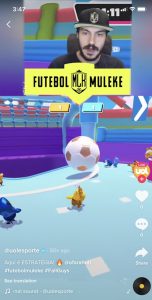 UOL Esporte, focused primarily on its sports section, was created with a different approach. Instead of giving full creative control to one person, the work is divided between a few creators, intermingled with clips from other content created by or under the UOL Esporte umbrella.

“Our Instagram already had a praiseworthy informal communication style – not focused exclusively on news – with our public,” Manzon told LJR. “Our approach was also based on a select few creators with different personalities and formations. So, we tried using this successful template in our TikTok.”

La Nación TikTok, on the other hand, found its niche in Argentina with a small, but high-energy crew, especially Sofia Altuna, herself a verified creator with more than 700,000 followers for her personal profile.

Using hooks to pull viewers’ attention and dynamic cuts amidst suspenseful music, as well as using the green screen effect that serves to create a background image linked to the theme, the account has gathered, according to Felix Ramallo, chief editor of social media, almost 215,000 followers.

Both publishers’ takes on TikTok represent distinct approaches that are not simply copying formats from other outlets, but also experimenting and adapting to their specific needs and audiences. In this regard, basic company organization seems to be integral for both publishers to keep ahead.

“Our crew analyzes what is trending, as well as the main topics of the day or what we see trending on other networks. We also analyze what content has the best metrics on our social networks, which stories had a bigger impact,” Ramallo told LJR.

“Based on that, we decide which story to tell, in addition to a back and forth between the editor and the reporter. In addition, the reporter offers his own topics of interest in a weekly or daily summary,” he said.

Something similar happens with UOL Esportes, where Manzon sees different schools of thought, citing publishers that use one journalist to present the publishers’ content.

“At UOL, we decided to have variety in the term of creators; diversity is part of UOL´s genes. We have a production grid all synced up that flows in a coordinated way alongside the daily talk between creators,  editors, and the social media team. No part of this is totally autonomous, we must integrate the best we can,” he said.

For personal brands, like that of influential columnist Guilherme Amado, the picture is more complex as there is not a crew behind him helping to see the bigger picture. Amado´s work has a high-demand and high stakes, which conflict with the challenging nature of the app.

That's why, Amado disclosed to LJR,  he hired 21-year-old journalist Bruna Lima out of his own pocket to help polish his column identity and strategize in TikTok and other social networks.

“If I am using the app for more than an hour daily to produce content, I am most probably letting important information pass by my radar,” Amado said.

This perspective is in sync with Dave Jorgenson, who believes anyone (even those that wish to explain things in a more direct way) can have an interesting and unique approach in the app. “They don’t have to be good at everything, they just need to know what they’re good at,” he said.

Another thing that helps is not taking yourself so seriously. Jorgenson shared that he always heard this piece of advice from recently-retired Washington Post Executive Editor Marty Baron.

“You should be accurate and work hard, but if your head gets too big, eventually it won’t fit on anyone’s phone screen,” Jorgenson said. “No one wants a journalist who thinks they are more important than their readers (or viewers, in this case).”

Jean Manzon also talked about presentation on the social network, citing that a particularly important idea is to understand that the starting point is not you, but how the other is consuming that experience.

Sofia Altuna appears in most of the TikTok videos on the account of Argentine newspaper La Nación. This particular video featuring one of the publication's articles brought in 1.2 million views. (Screenshot)

“The territory you are occupying is not where UOL, Globo, CBS, are, among others. You are in the middle of a lot of individual creators, institutions, influencers etc. So, the lines, for those consuming, are not as clear. So, it is important to understand the medium and where you can go without compromising your own personality,” he said.

Amid this discussion, many journalists keep on experimenting. After her hit post, Eunice López continued the trend, making even more curiosity-baiting posts, eventually being replied to (in form of duets) by people who aspire to study journalism, who are currently studying the subject and even those who had dropped out.

“It is about making it look easy, without technical language, something that they can say ‘I can do this, too,’” López realized, observing that this kind of content generates a lot of traffic. “I also do not forget to answer their questions through the comments.”

Along with all those who watched her’s and others’ teleprompter challenges was Elisabeth Alvarenga, a 26-year-old Salvadoran undergraduate student in journalism. Alvarenga did a duet with journalist Antonio Betancourt via the comments section. The soon-to-be journalist thought it was interesting to see a future colleague presenting the reality behind the camera, especially technical details.

“The audience likes curiosities, and thus, journalists achieve their goal, which is to generate more likes, comments and growth in their accounts,” Alvarenga said.

This interaction with the comment section is also important at La Nación, according to Ramallo.

“Our followers on TikTok actively participate with their comments on the videos. Sofía [Altuna] also comments on them from the newspaper’s profile as well as from her own, and on several occasions, we have created videos based on the comments of the followers.”

All of that seems to revolve around the theme of engagement over “being first,” a traditional focus point for journalists and publishers.

“Overall, people want accuracy and a video that keeps their attention. I’ve learned this lesson repeatedly,” Jorgenson concluded, before flying into the sunset to resume Washington Post TikTok videos.