Underrepresented and besieged by stereotypes and biases. This is how women appear in the news in at least 15 Latin American countries according to the 2020 report "Who makes the news?" which is part of the Global Media Monitoring Project (GMMP).

The project looks not only at the journalists who make the news, but also the people represented in the news reports. 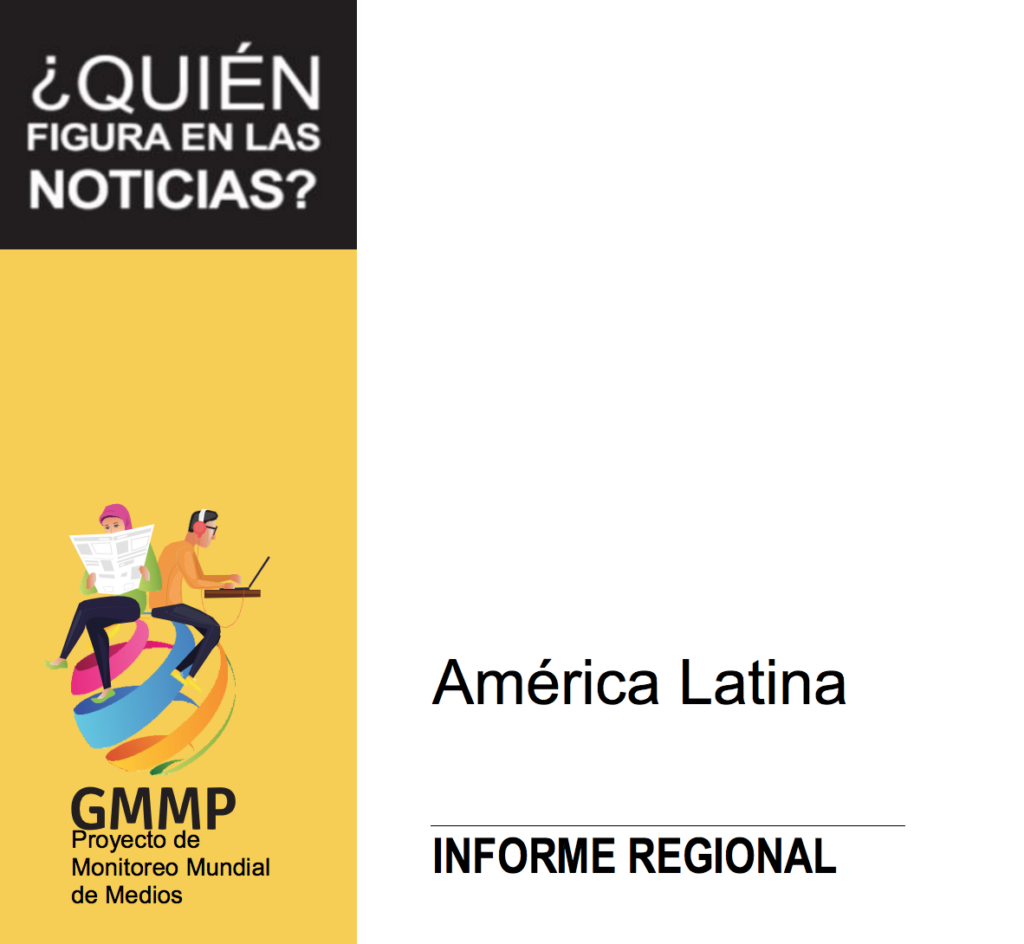 The GMMP is the "longest and most extensive investigation in the world on gender in the media," according to the report, which is carried out every five years. For the 2020 report, 30,172 stories published in newspapers as well as broadcast on radio, television, published on news websites and in news media tweets in 116 countries were tracked for a single day in September.

The total analysis of the region included 7,270 news items. In the case of radio and television, the main newscasts were monitored, and for digital newspapers and Twitter accounts the analysis was made after 6 p.m.

According to the data, the participation of women in the media as a news subject reaches an average of 26 percent in the region. The percentage compared to the last report (from 2015) had a reduction of 3 percentage points. Television is where women are most represented (28%) and radio is where they are least represented (22%).

"The idea of the results is to reinforce and have evidence, because [sometimes] we are left with the feeling that women are not being represented in the media," Sandra López Astudillo, director of Fundación Gamma of Ecuador and coordinator of the GMPP Latin America Report, told LatAm Journalism Review (LJR).

"Not only are we underrepresented, but we are also represented in a biased way, with the traditional areas assigned to women: social issues, gender violence, etc.," López added. “When talking about professions, for example, women appear as housewives, 100% are still women, or with the care [of other people], 100% are women. And it is not that we don’t support that, but the point is that there are still biased themes, and women are in spaces like fashion, entertainment.”

According to the report, the topics in which women appear more as subjects of the news are social and legal (reaching 34%). These are followed by science and health (30%). López highlighted how difficult it is to find women in fields as expert voices. The situation brings "consequences in real life," as López explained because roles and a culture are maintained that ultimately affect society as a whole.

"Women continue to have little access to training in non-traditional careers, and when we access them, [suddenly] we are in charge of the house, we continue to earn a lower salary," López said. “What it wants to show is that it is not a harmless situation, but that it maintains a circle, where new opportunities are not generated, there is no impulse to change society, for people who are with the media on a daily basis. […] The great call is to change the image and respond as media as a contribution to change the reality of women's lives, of social life in general.”

Precisely, equality issues are of very little interest to the media, according to the report. In fact, these topics occupy 7% of the total news agenda, and of this only 1% occupies a relevant place or space in the media.

One of the report's findings has to do with a greater presence of women as subjects in issues such as domestic violence and femicides. In 2020, due to the COVID-19 pandemic, the situation has worsened. However, the report points out as a positive aspect that the media have included the gender issue when covering this news and it is not included as part of general violence.

“Yes, there is a change, an evolution of the media. In the initial monitoring of news about violence, women were almost always accused, although it still happens, it is in smaller numbers,” López said. “There are efforts to include expert voices on gender when it comes to gender violence. There is a breakthrough in that.”

Likewise, progress has been seen in the political issue for the case of Latin America. Although globally the presence of women in the news has decreased, in politics it has increased.

"It is an element that does encourage us, increasingly they are responsible for the news, not only when they are official spokespersons, but also in issues related to the politics of a country," López said.

Finally, there has also been an increase in appearance of women as subjects in topics such as health and science, an issue that was particularly important during 2020 due to the pandemic.

For this year's report, in addition to adding the question about whether a news item was linked to the pandemic, three questions were included specifically for Latin America. One of them had to do with analyzing whether the person was described as part of a native or ancestral people.

“The vision of the Indigenous population, which is very invisible, is interesting. The representation in the GMMP is very low compared to the rest of the population,” López said. “I believe that a new area of media study is opening, to look at these data. From the women's movement we have achieved changes, but not enough. We have made great strides in different areas, but there is still a need.”

Women journalists, on the other hand, have a greater presence: the average in Latin America is 35%. Television continues to be where women journalists have the greatest presence (46.72%) followed by radio (37.44%).

For López, it is clear that the underrepresentation of women in the media is not due to an intentional decision, but for the same reason she calls for these results to lead to changes in internal politics. ​​As she said, a first effort is to look at what things are serving to make a better society and what is not.

“After this sensitivity panning, looking at what is happening in society [should be] informed in a conscious way, looking for [a perspective] from human rights, with training platforms, with codes from a technical point of view, talking about the rights of Indigenous peoples, in light of the analysis of what can do us good," López said.

The GMMP was designed to "capture a snapshot of gender on an 'ordinary' news day in the world's media." For Latin America, this review was made on September 29, 2020. The date, according to López, is intended to be different from the commemorations related to women's rights, particularly important issues in politics such as the installation of a president, which capture the news agenda.

The countries with the highest number of news items analyzed were Mexico (with 17.7%) and Bolivia (9.38%). Radio was the medium with the most news analyzed (34%) followed by television (22%). However, for this year, digital media had an increase (12%) that equals the written press (12%). Finally, media Twitter accounts accounted for 16%.

The topics that most occupy the news agenda in Latin America are “politics and government” as well as “economy”.

The report for Latin America can be read here in Spanish.