By Silvia Higuera and Teresa Mioli

Two former paramilitary members have been sentenced to a total of 70 years in prison in relation to the abduction, torture and sexual abuse of Colombian journalist Jineth Bedoya Lima that happened almost 20 years ago. 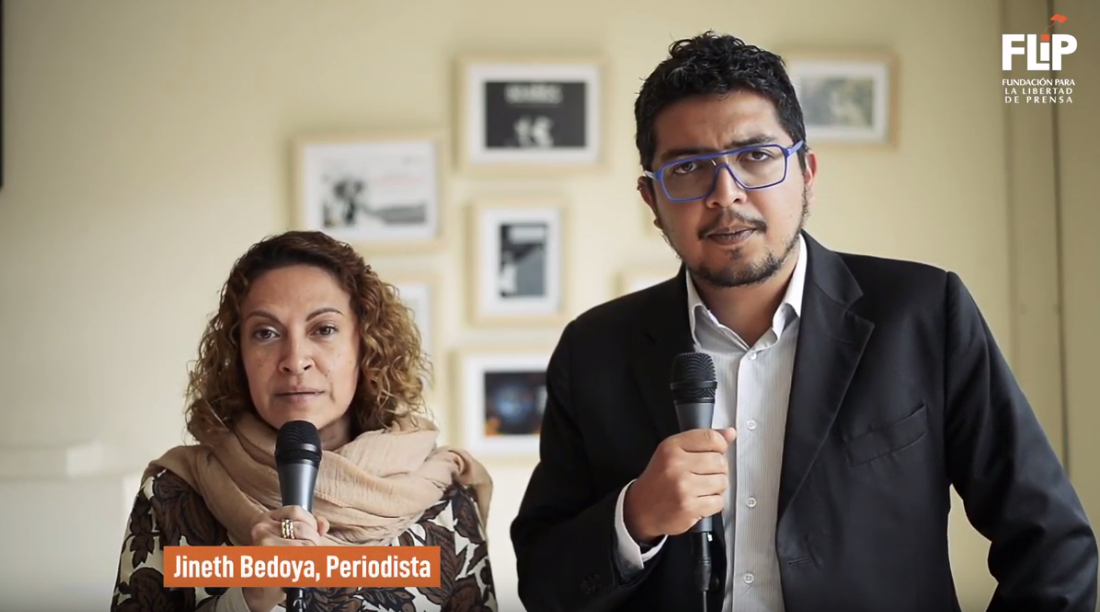 Jineth Bedoya Lima and Pedro Vaca speak about the sentencing of two men in the case of her abduction, torture and sexual violation. (Screenshot/FLIP)

It should be noted that the court asked the public prosecutor's office to investigate the retired general of the Police, José Leonardo Gallego, who at that time directed the Directorate of Criminal Investigation (Dijín) of that entity, and who has been mentioned in the development of the investigation of the crime against Bedoya, according to El Tiempo. According to the newspaper, it was an "historic" decision.

“Bearing in mind that based on the evidence related to the present proceedings, especially the account of the events provided during the public hearing by the victim Jineth Bedoya, the possible responsibility of third parties in the same case, including some public servants like the retired general of the National Police José Leonardo Gallego, then-director of the Dijín, could be deduced,” the decision read, according to El Espectador.

In 2011, Cárdenas Orozco accepted some charges, but later retracted his decision, according to El Espectador. Nevertheless, he was sentenced to 11 years and five months in prison in February 2016 for the crimes of simple abduction and torture.

In August 2017, the Colombian Supreme Court upheld an earlier decision that meant he and another person could not benefit from the the Justice and Peace Law, which could have provided them with reduced sentences in the framework of the peace process between this group and the State.

The Foundation for Press Freedom (FLIP) of Colombia, an organization that has been Bedoya’s legal representative since 2011, recognizes the May 2019 decision “as an advance in the clarification of the facts," but "emphatically warns that this sentence can not be understood as the overcoming of impunity in the case.”

In a statement with Pedro Vaca, executive director of FLIP, Bedoya stressed that the sentence recognizes that her crime could have been prevented if the State had given guarantees when there were previous threats and an attack in which the journalist’s mother almost died.

"I also want to emphasize that the Fifth Specialized Court finally hears this clamor that we victims of sexual violence have made a thousand times and it is that they understand that position and that state from which we speak and from which we are judged," Bedoya said.

"Many times – in the number of times that they revictimized me in the middle of the hearings, in which the prosecution itself forced me to testify – I had to hear from my victimizers saying that I was a liar, that I was inventing the rape. I had to listen not only to them but to many people. And today this sentence confirms, ratifies and tells me that effectively we never invented this and this is stated in the sentence. It makes a clear call that the testimony of a woman who has faced sexual violence has to be heard, respected and not revictimized," the journalist said.

Vaca points out these judgments as a "minimum" result if one takes into account the 19 years that have passed and the "more than 12 repeated citations to the victim to repeat the story at a tremendously draining emotional, physical and health-related cost.”

For FLIP, this is "not a finishing line" but a starting point because all the people who could be responsible for the crime have not yet been sanctioned. According to its statement, in the investigation "at least 25 people – including public officials – have been mentioned who could be involved in the events."

However, this is only the third conviction in the crime against the journalist. In March 2016, Mario Jaimes Mejía, alias 'El Panadero,' was sentenced to 28 years in prison.

Bedoya Lima, now deputy editor of newspaper El Tiempo, was abducted on May 25, 2000 in the door to La Modelo prison in Bogotá where she was investigating the deaths of 26 inmates. She was abducted, beaten, threatened, raped and then abandoned.

The torture and sexual abuse against her were declared crimes against humanity by the country’s Attorney General in 2012 and the case was made imprescriptible, meaning there is no time limit for investigating the case.

Vaca also highlighted the fact that this new sentence ratifies the case as a crime against humanity, which means that "the efforts of the State in investigation and punishment should not stop here," he said in the statement.

In 2009, Bedoya created the “It’s Not Time To Be Silent” campaign to denounce crimes of sexual violence against women. She also has worked for victims of the country’s armed conflict.