April marks three years of social crisis in Nicaragua; journalists tell what it's like to work under repression from the regime

This month, Nicaragua completes three years of crisis that began on April 18, 2018, when the country was shaken by serious protests. The demonstrations, initially against a pension reform, expanded and turned against the authoritarian regime of Daniel Ortega, who has held the presidency since 2007.

The demonstrations are a milestone in the country, because, after them, the Nicaraguan regime and supporters of the governing party, the Sandinista National Liberation Front, turned against the press and opponents.

According to a report from Article 19, Nicaragua is among the five countries in the world that saw the biggest decline in freedom of expression between 2009 and 2019. In the document, the NGO says that President Ortega “has eroded democratic structures since taking office.” Nicaragua, Cuba and Venezuela are the only countries in the Americas classified as "in crisis" by Article 19.

On the anniversary of the demonstrations, LatAm Journalism Review (LJR) spoke with reporters in Nicaragua to find out what it is like to live and work in a climate of fear and repression, in which journalists are arrested, prosecuted and harassed by the police in their homes. At the same time, critical media suffer from government newsprint retention, are shut down or are expropriated.

Freelance reporter Ileana Lacayo, a member of the executive committee of Independent Journalists and Communicators of Nicaragua (PCIN), an association representing 180 journalists in the country, says that violence against the press has persisted since 2018. She reinforces that, recently, however, something has changed: repression has, in her words, been legalized. According to Lacayo, the government has approved, since the end of last year, a package of repressive laws, which have made the environment much more hostile to journalism.

One of them, the “Cybercrime Law”, known as the “Gag Law,” determines prison terms from 1 to 8 years when the Sandinista government considers that the journalist has published "false news." Also last year, parliament passed a constitutional amendment that allowed life sentences for "hate crimes."

“The government believes that a media outlet critical of the government encourages hatred. So, if they prosecute you, they can use life imprisonment as one of the penalties, possibly, for journalists or the media,” Lacayo told LJR.

Finally, she also highlighted the law on foreign agents, which had an important impact on civil society and the press, with the closure or suspension of operations by organizations, including some that supported local journalism and freedom of expression, such as Fundación Violeta Chamorro.

“Practically, the law regulates the entry of money of international origin, and even if you are Nicaraguan [and you receive money from abroad], you are considered a foreign agent and you are prohibited from investigating, publishing and commenting on matters that have to do with national politics. It is super serious because if I receive a fund to support my journalistic investigations on corruption or on the public agenda, I cannot do it,” Lacayo said.

According to her, the law contributed to the economic asphyxiation of independent media, which were already struggling to sustain themselves during a serious economic and health crisis.

The reporter adds that, in addition to the enactment of these laws, some types of violations increased in the first quarter of 2021, according to monitoring by the PCIN, which will be launched this month.

"There has been an increase in journalists being attacked, trying to take cell phones and cameras from them, persecution, physical blocking of teams of journalists so that they do not report. There have even been aggressions and abuse, because they have touched the sexual parts of journalists. Harassment in the journalists' homes [also increased], as in the case of Kalua Salazar. The armed police and patrols have been going to her house every day for practically three months,” she said. 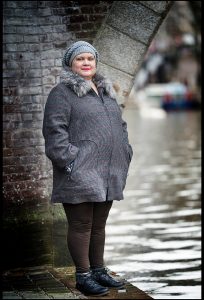 Ileana Lacayo in exile in the Netherlands. Photo: Personal Archive

Lacayo was also a victim of persecution. In April 2018, they broke into her house and ransacked clothes, documents and objects while she was at the funeral of her colleague, journalist Ángel Gahona, who was murdered in Bluefields while covering anti-government protests. Upon arriving home, at night, Lacayo noticed the invasion and, since then, has never returned, even though she is still the owner of the property.

Soon thereafter, she went into exile, as part of an international journalist protection program. She spent almost two years away, living in the Netherlands and Costa Rica. In December 2019, however, when the program ended, she had to return.

“Going back was a very difficult decision and it scares you. In other words, in Nicaragua there are still no conditions to return from exile, but exile is hard. And in Costa Rica it is even moreso, because it has many immigrants from Nicaragua, there are almost a million Nicaraguans in Costa Rica, and there is a lot of xenophobia and very few opportunities. I could not have a job or an opportunity to be able to survive and after the protection program ended, when I was left without support, it became very difficult,” she said.

Lacayo knew that returning would be risky and, therefore, she adopted a security plan, which included spending six months without leaving home, with a low profile. "But as soon as I poked my head out a little and began to write again and to be in public spaces where denouncements are made, they began the siege and harassment from police at my house. So it is not easy, many times I have thought again about leaving, but, well, you have to resist,” she said.

Death threat and attack at home

Reporter Wilih Francisco Narváez González has been working for about a month with digital outlet Divergentes, which launched in July 2020. After conducting a series of interviews with presidential candidates, he began to suffer more severe persecution. Narváez explains, for example, that a host of a radio station supportive of the government said, during a program, that Divergentes was a "foreign agent" and specifically mentioned him.

The series spoke only to opposition candidates, because, according to Narváez, Ortega would not give an interview to a critical media outlet and has not given a press conference since he returned to power.

Before working at Divergentes, Narváez had already been physically assaulted while reporting, when he was a TV reporter for Canal 10. But the recent threats and attacks made him more concerned, because one person came to his home, where he lives with his family.

“This person came to the house, perhaps under the influence of some substance, to make verbal attacks. My mother went out to see what was happening and he said: the Channel 10 journalist lives here. [...] And he made a sign with his hand that he was going to cut off my head. He kept yelling things and left. Later, on Feb. 28, at one in the morning, that person came to the same property that belongs to my mother to make verbal attacks and to throw stones at the property,” he told LJR.

As on the other occasion when he was attacked, Narváez went to the authorities, but says that nothing was done. "Faced with two attacks and an imminent risk, I felt powerless and I was obliged to make a complaint on social networks. Appealing to the authorities, in any situation that may happen to me, even what happened in my mother's house, it makes me clear that the police will always turn their backs on me, I feel helpless.” 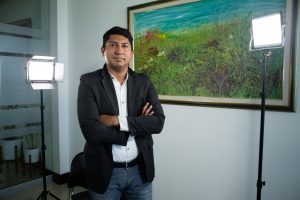 Narváez says that on March 4, the father of the man who attacked his home went to the scene to justify his son's actions, saying he was “an addict,” but complained that the journalist was “politicizing the case and profiting from it.” That same day, Narváez received a threat via social media from a female government supporter.

"She sent me a threatening message saying that they had me and my family very well-monitored and that they were going to come to set fire with everything inside the property. The threat also had an image with a rifle and some bullets and said that there was a bullet for each one of the members of my family. And she called me ‘coup dog,’” he said.

Narváez says he would like to believe the first incident was an isolated attack, the work of a man with chemical dependency problems, but he doubts that version. He attributes the incident at his mother’s house to the regime's hate speech against journalists, which ends up influencing the population.

After the attack, the journalist took several protective measures. Some simple ones, like walking the streets with props that cover part of the face. And others that have a big impact on his routine, but that cannot be reported for his own safety.

Narváez is concerned about the approaching national elections, scheduled for November. “It is a year that generates a lot of uncertainty in general and of great risk for the practice of journalism in Nicaragua. There will be no national and international observation [of the electoral process], here the only thing that remains is for independent journalism to be the inspector of the process, that will be the voice, both nationally and internationally.”

Do not sign articles and do not go out alone

A Nicaraguan journalist, who asked not to be identified for fear of reprisals, told LJR that he took several security measures after 2018, such as not signing stories and not going out to report alone. The reporter works as a freelancer for several outlets, including Despacho 505.

When he leaves to do a story, he asks a journalist friend to accompany him. And he does the same for his colleagues, when they need it. “For security reasons, if something happens to one, at least the other warns: 'They took him prisoner, or he is being held in that place. And I do not sign some articles, the ones that criticize or bother the government the most,” he said.

The decision not to sign articles has an effect on daily life. In addition to being detrimental to the journalist's career, by renouncing the authorship of his work, this makes it difficult to contact sources, who are more suspicious. To make matters worse, he said, the government refuses to pass on information to the press.

“Institutions close their doors to us and do not provide information, so investigating issues is more difficult. And people are afraid to speak, they only speak without identifying themselves. Nobody wants to give an interview. Sometimes we don't have anything to document the story with.”

Asked if he suffered aggression or was harassed by the police at home, the journalist replied that he had not, that he “only” received death threats. He highlighted the economic impacts of the government's crackdown on the press.

“I was a worker for El Nuevo Diario, but the newspaper closed in September 2019, due to many obstacles and threats. There was retention of the paper, but later there were other types of systems to intimidate and they ended up closing the newspaper,” he said. Today, as a freelancer, he says he has not recovered the income and financial stability of that time. “Many media outlets have closed and it has generated unemployment among journalists. Journalism in Nicaragua is going through a real windstorm,” he said.

The reporter fears that violations against the press will increase during the elections. “The situation is going to get worse, they can attack us, because there is no tolerance on the part of the government's like-minded groups, who see an independent journalist as an enemy,” he said.