A crowdfunding platform that has become one of the most successful in Brazil with projects ranging from comics and board games to films, music albums and theater shows is creating a project dedicated solely to independent journalism. 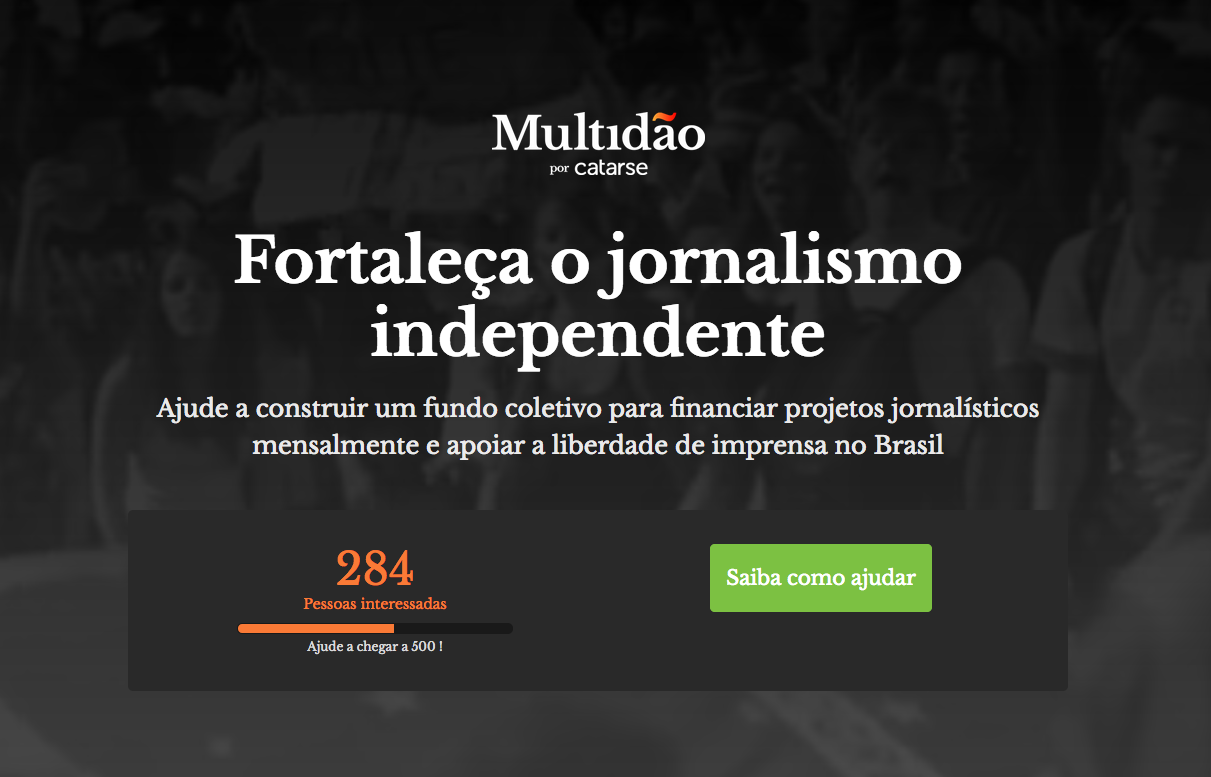 Catarse, a Brazilian crowdfunding platform, has already mediated the distribution of R $92 million (about US $24 million) to projects financed by 552,000 people over its seven years of existence. Of these, 172 were journalism projects – that included support for reports and subscribers of independent media – which received almost R $2.5 million (about US $651,000) from more than 26,000 supporters, according to the company.

The platform now wants to “invert the logic” of its operation in favor of journalism, Rodrigo Machado, CEO of Catarse, told the Knight Center. Instead of looking for creators and projects to be funded, as it usually does, the company wants to bring together people willing to finance independent journalism, creating a community that brings readers and journalists closer together, and that enables the completion of projects that contribute to strengthening democracy and press freedom in the country.

This is the proposal of the Multidão (Crowd), launched on Nov. 22. It is a collectively financed fund for the promotion of independent journalism in Brazil, which is currently in its mobilization phase to register as many people as possible who are interested in participating in the initiative. They will also help to think about how the fund, which should be officially open for contributions in early 2019, will work.

The creators of Multidão – Machado, Luis Otavio Ribeiro, director of strategy of Catarse, and Thiago Maia, product director of the company – want to understand how to build a community interested in journalism, with consumers and producers of information, the CEO explained.

“We are seeing a constant change in the business model of journalism,” said Machado, who graduated with a journalism degree from PUC-Rio. “There is a search for the subscriber model, and there are already people indicating that they are going to subscribe to one [news outlet], but they will not subscribe to ten. We think that as important as this quest for a sustainable business model is the understanding that communities need to get closer and closer to the practice of journalism.”

The idea at Catarse for a collectively financed fund geared to a specific field of content production had been around for a long time, and they felt this is a good time to support journalism in Brazil. Machado identified “a great difficulty in understanding what is qualified information that can be helpful in forming an opinion.”

“There is a cacophony that makes it very difficult for people to determine the facts. We saw this in the elections, also with an escalation of tactics to try to discredit the press in general,” he said. “There is a perceptible dislike in Brazilian society toward traditional media outlets, and there is a very large mass of journalists who are very interested in renewing and resignifying their roles and the roles of media.”

The fund’s operating mechanics have not yet been decided, Machado said. The idea is to establish it after hearing input from supporters and journalists, in conversations that are already happening. It’s been established that it will be a monthly subscription model, in which people will allocate an amount each month and the total will be distributed among various journalism projects. At first, the themes of politics, public safety, human rights, identity and cultural movements, the environment, social inclusion and fact-checking will be prioritized.

One proposal is for the fund to be focused on people, not media organizations, and for journalists as individuals to be supported in their projects.

“This comes from an assumption – which may be wrong, and if so, we’re going to figure out how to do better – that part of that perception about journalism, from the point of view of the public, needs to get out of the logic of the outlet and go toward the logic of who the journalists are, who these people are,” he said. “It does not mean that we are going to exclude organizations, but we want to try to understand how we can bring people and make them emerge from those organizations.”

The current context of political polarization and discrediting of the press in Brazil, however, has led to more and more recurrent cases of persecution and intimidation of journalists. Asked about the possibility of increasing the risk for the professional when emphasizing them instead of the outlet in which they work, Machado said this is one of the points on which he wants to hear from the journalists.

“Nobody better than the journalists to tell us that something like that involves a very high risk, which they do not want to run at the individual level, and if that’s the case, let’s think about something else,” he said. “This is our role. It’s not saying ‘we think it’s that’ period. The ones who can talk about this are the journalists, not us. We understand technology, ways to connect, mobilization and creating ways to circulate resources on the internet to boost jobs. Everything else will be with the public and the journalists.”

The idea is that these exchanges with the interested public and journalists – who can sign up on Multidão’s page to be part of the conversation – will continue until the end of the year, and that in early 2019 the fund will be open for contributions from supporters. One positive indication for the establishment of the fund is that, after the elections, Catarse has seen an increase in the number of supporters and the amount invested by them in independent journalistic media using the platform’s subscription program.

“We already had everything ready to launch and then this came,” Machado celebrated. “We are talking mainly with the people who already have projects in Catarse, but everything is very preliminary. The impact [of the Crowd launch] was not large, but it was very qualitative, very interesting people came to us to talk. This puts a little more responsibility on what we are doing. We were trying to go far below the radar, soft, to understand things slower, and we’re going to have to accelerate just to meet people’s expectations.”

Journalist and university professor Edson Capoano has dedicated himself to research on business models and financing of journalism and welcomes the creation of a crowdfunding platform shared among several journalistic projects.

Professor of the Master’s program in Journalism at the Superior School of Advertising and Marketing (ESPM) in São Paulo, he is the organizer of the free e-book “Como bancar o jornalismo? (How to finance journalism?), launched in early November, with articles by researchers in the program.

“It’s an initiative that took time to come up, this kind of collective organization to fund alternative and independent journalism,” Capoano told the Knight Center. “The crowdfunding platform is already commonplace for alternative media, but there are still not many aggregators, platforms that could share the gains. So I think [the initiative] is very welcome.”

The creation of communities united by an interest in journalism and the defense of the free press is something in which media from other countries, like the The Guardian from Britain and The New York Times from the U.S., are already betting on, he observed.

“This part of Multidão summons the reader as an activist. An activist who believes in correct information, which does not only serve large groups, but also interests of communities, of niches that are precisely the niches that independent media cover,” he said. “This new platform seems to be organizing this demand from people to engage in interesting stories and credible information.”

For the professor, the customization proposed by Multidão, with the emphasis on the journalist and not on the outlet, also follows a current trend of “solidifying the journalist’s brand.”

“The negative side of this is that individuals who do not believe in freedom of the press start to persecute the authors of stories or even the columnists who give their opinion, not understanding that this is part of our social role,” he said. “The positive side is that we can get moral support in networks, and financial support, precisely because we are detaching our names from the journalistic companies we work for. So despite this phenomenon of persecution, which is very strong, there is an opportunity to have a positive, virtuous community around the journalists who put themselves out there.”

In his studies, Capoano says he has identified that, in Brazil as in other countries, crowdfunding as a financing alternative for journalism works well for short and punctual projects, such as special reports, for example. The method is no longer so reliable to sustain journalism outlets continuously. That’s because supporters scatter, he said.

“To make crowdfunding work in journalism, you have to keep engagement high. If it is to depend on people putting their money there simply because the crowdfunding platform is available, studies show that support tends to cool,” the professor noted.

He evaluates that, in this sense, Multidão can work by proposing a constant engagement, by having the relationship between producer and consumer of information at its center.

“We need to make people understand that funding is at the heart of these [journalistic] productions. People are already morally supportive of independent media, but the relationship of support with money to be invested is not yet very clear,” he said. “Being on the internet, these independent media are considered free. This initiative, in addition to linking support and money between the ends, can slightly change the mentality of both independent journalism that is activist, believes in what it does, and the reader, making them understand that one needs the other morally and financially.”