Lucas Thaynan and Graziela França were young students at Federal de Alagoas when the university went on strike. With free time on their hands, they decided to take an online course in data journalism.

"I had never heard of this term, data journalism. But from what I quickly read, it combined journalism that interested me and numbers, which I already liked a lot," Thaynan told LatAm Journalism Review (LJR).

After the course, the students went deeper into the subject and launched, while still in college and with just R$200 (US $36), Tatu, a data journalism agency specializing in coverage of the state of Alagoas. Today, the startup has eight employees, is already financially sustainable and seeks to expand coverage to encompass the Northeast, the second most populous region in the country, concentrating more than 27 percent of Brazilians. 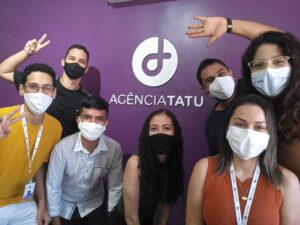 Despite this, the Northeast is also the region with the highest number and the highest proportion of news deserts, which are municipalities without independent journalism outlets, according to the 2020 Atlas da Notícia. There are 1,318 deserts, that is, 73.5 percent of northeastern municipalities do not have any media outlets.

Last year, Tatu was chosen to participate in the Startup Lab from Google News Initiative, a program to support and accelerate journalism companies and projects. In addition to mentoring and training, the startup received $20,000 in funding.

"We were the only representatives from the North and Northeast, of ten Brazilian outlets, this was very nice for us," said Thaynan, who is the agency's visualization director.

Bringing this representativeness and regional diversity to media environments dominated by outlets from the Rio-São Paulo-Brasília axis, in addition to filling an informative void in the Northeast, is one of Tatu's missions.

At the beginning of the project, while still in college, Thaynan had planned to focus only on data and politics. But the scarcity of this type of journalism in Alagoas made him abandon the idea of restricting content to just one section of the news.

"Nobody does data journalism here in the state, so we can work on any theme within that. We did a lot of production focused on health, during the pandemic, and we covered politics, economics, the environment, public safety," he said.

Tatu's technology director, Lucas Maia, who joined the initiative a year after its launch, agrees.

"Wherever there is data [about Alagoas and about the Northeast], we are covering it. Because in a way Brazil is already being well covered, and there is a lack of this coverage right here in the Northeast. So, instead of competing with large outlets, we try to do what is not being done," Maia told LJR.

The journalist emphasizes how the lack of information about the Northeast has a real impact on people's lives.

"I know a lot more about São Paulo than about Sergipe and Pernambuco, which are right next door. Only with new outlets emerging and new sources of revenue will we be able to change that. If whoever finances my outlet, if every bit of the origin of revenue is in the Southeast or in the federal capital, all my stories will also be from there," he explained.

Maia says that newsrooms in the state have gone through many cuts and layoffs in recent years, which has affected the ability of local journalists to do good reporting.

"So, what abounds on news sites is information based on press releases. You will hardly see a well-investigated story unless you are close to an award, when journalists are mobilized to make a report a little more elaborated [... ] Traditional newsrooms here are usually guided by declaratory journalism. You go to the press conference, ask the governor how public security is, and you write," he said.

Thus, Tatu's differential, in the local context, is that it uses raw data to create its own stories, escaping from the press offices' agenda. In other words, the declaration of the authorities comes at the end of the article, when it is time to ask for the other side, and not as a starting point, Maia says.

"This is sorely missed and this is the space we try to cover.”

Starting a business in college with no money

The idea of creating Tatu came after Thaynan took an introductory online course in data journalism from the Knight Center for Journalism in the Americas in 2015 when he was in college.

At the end of the training, the best works were selected to participate in an event at Google. Thaynan says he was the only student among the eight chosen – the others were professionals already working in the field. The experience and feedback from the instructors, according to him, was "a very great motivation.”

"I think if it weren't for the Knight Center, Tatu wouldn't exist today."

After the course, Thaynan discovered that Graziela França, current content director at Tatu and his college friend, had also taken the training. Throughout 2015 and 2016, the two delved into data journalism, but they missed putting the new knowledge into practice.

So, in 2017, Thaynan decided to do his graduation work about a data journalism agency. Then he proposed to França and another college friend to build on the project to create Tatu, which was launched in April. 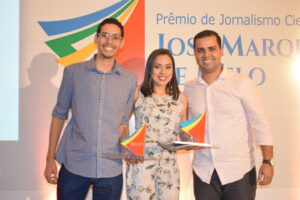 Thaynan says that, in the first year, they financed themselves with the value of the local prizes they won. And everything was reinvested in the agency.

"There were about three awards, each one gave around a thousand reais (about US $181). Today we have eight awards.”

To launch the agency, they spent about four months setting up the site, all by themselves.

"We didn't know how to do it, we learned it the hard way and set it up from scratch. We invested only R$200 (about US $36) at the beginning, for hosting and domain," he said.

In 2018, Thaynan and Maia took another Knight Center course on Python.

"I already knew about Thaynan's and Tatu's work, among the students it was something very talked about, they took all the awards in the state, but I didn't know them personally,” said Maia, who was also studying at Federal de Alagoas. The two were selected, at the end of Knight's course, for an event at Google, where they met, and Maia joined Tatu.

In the same year, Thaynan graduated. He had already done several internships in local newsrooms, but instead of looking for a permanent job at an outlet, he decided to invest in the agency.

"I thought 'maybe we have a really cool project here'… because in Tatu's first year we had already received some local awards.”

The fact that the journalistic market in Alagoas was going through a difficult time also contributed to his decision. In 2019, there was a big strike by journalists and, after the mobilization, many companies laid off employees en masse, especially those linked to the strike. Those who kept their newsroom jobs had their salaries cut and suffered from drastic staff reductions, Thaynan said.

"We are still experiencing many repercussions from this strike and I believe that we will experience them in the next five to ten years. This made me dedicate myself even more to Tatu to make it grow and be able to pay the entire team. If the job market for journalists here was already difficult, after the strike it got even worse. The market was too small for everyone," he said.

Until 2020, everyone who worked at Tatu acted as volunteers. Currently, the startup has eight employees, all paid. The outlet publishes two special articles a week on its website, which can be republished for free. Thaynan says this was a strategy to become known to the public and journalists in the region.

Maia says that, since 2018, the team has undergone a lot of training and mentoring, with the aim of making Tatu grow and become sustainable.

"We have matured how the company works, how to raise funds, and this has allowed us to have a constant revenue, a larger team, and a nice office to work in,” he celebrates.

Tatu currently finances itself mainly with the sale of content production services to third parties, such as companies and governments. An example is the partnership with the state government: in the pandemic, the agency carried out a fact-checking project to combat fake news in health. Despite the partnerships, Maia says this does not affect the agency's editorial independence or the reporting they do.

One of Tatu's most successful journalistic initiatives was the tool “Onde tem Álcool Gel em Maceió?" (Where is Hand Sanitizerl in Maceió?).

"At the beginning of the pandemic, the stock of hand sanitizer ran out. You looked in supermarkets and pharmacies and couldn't find it," Thaynan recalled.

At the time, the team already had experience with a public database from the Treasury Office of the State of Alagoas, which shows, in real time, the issuance of receipts by commercial establishments in the state. In other words, if a store is issuing a receipt for merchandise, it probably has this product in its stock, the journalists explained. And, with the same database, it is also possible to carry out a series of analyses on market prices.

"It was a very good idea from Maia, because overnight we created a tool to show which establishments in the capital, Maceió, had alcohol gel available,” Thaynan said.

Maia says that there were around 40,000 hits in a few hours and the agency's website went offline.

Using the same database and taking into account the escalation in fuel prices in the country, Tatu created the Abastece Maceió (Fuel Maceió) application, updated in real time, where it is possible to search for where gasoline is cheaper at the city's gas stations.

For Maia, this type of tool showcases Tatu’s work and is in the agency's DNA.

"Building stories from data is something that here in Alagoas is very scarce, practically non-existent.”

*Editor’s note: LatAm Journalism Review is a program of the Knight Center for Journalism in the Americas, which offered the courses taken by founders and directors of Tatu.