In a move criticized by press freedom organizations, U.S. journalist Glenn Greenwald was charged by the Federal Public Prosecutor (MPF, for its acronym in Portuguese) for alleged involvement with hackers who accessed messages exchanged through the Telegram application by various authorities, such as Minister of Justice Sergio Moro and prosecutor Deltan Dallagnol, who leads the task force for Operation Car Wash.

In a video posted on Twitter, Greenwald said that attorney Wellington Divino de Oliveira, who signed the charges, "is abusing his position to attack political enemies."

“It is an attack on the free press, against our reporting, but also against the Federal Police and the STF [Federal Supreme Court], which said that I could not be investigated, much less charged, for my report, because it is a violation of the constitutional right of a free press. This is obviously retaliation by the Bolsonaro government. We will never be intimidated by anyone (who is) abusing the state apparatus,” Greenwald wrote via Twitter.

The conversations between Dallagnol and other members of the task force and with Judge Sergio Moro, now Minister of Justice, serve as the basis for the series of reports called Vaza-Jato, published by The Intercept Brasil, Folha de S.Paulo, Veja, UOL and El País Brasil.

The Intercept Brasil, a website founded by Greenwald, says the series is supported by "large and unpublished files – including private messages, audio recordings, videos, photos, court documents and other items – sent by an anonymous source." Eventually, the hacker who broke into the phones was arrested and confessed to being the source of The Intercept.

The reports showed a proximity between Moro and the Lava Jato prosecutors and called into question the judge’s impartiality. If there is an understanding that Moro acted in a partial manner, his sentences could be overturned. Both the former judge and Dallagnol say they do not recognize the authenticity of the files, but say that even if they are real, they would not show any illegality.

Greenwald recalled that attorney Divino de Oliveira, who signed the charges, also caused controversy in December 2019 when asking for the removal of the President of the Bar Association of Brazil, Felipe Santa Cruz, for criticism made about Minister of Justice Sergio Moro. The judiciary archived the request. Watch the full video:

In a note sent to Folha, Greenwald said that the charges are a form of intimidation. "It is an obvious attempt to attack the free press in retaliation for the revelations we have reported about Minister Moro and the Bolsonaro government," he said.

The journalist said he will continue his work. "We will not be intimidated by these tyrannical attempts to silence journalists. I am now working on new reports and will continue to do my journalistic work. Many brave Brazilians have sacrificed their freedom and even their lives for Brazilian democracy, and I feel an obligation to continue this noble work,” he stated.

In the note, Greenwald said that President Jair Bolsonaro and his supporters do not believe in press freedom and cited attacks by the chief executive against journalists.

These charges come despite the fact that an injunction from the Federal Supreme Court is in effect "guaranteeing [the right] of journalist Glenn Greenwald not to be investigated for the disclosure of information that preserves the confidentiality of the source," as a note on the court’s website explained at the time.

Greenwald's lawyers, Rafael Borges and Rafael Fagundes, said in a note that they received the charges with perplexity. "It is a crude expedient that aims to disrespect the authority of the precautionary measure granted in the claim of non-compliance with a fundamental precept (ADPF) No. 601, of the Federal Supreme Court, in addition to hurting press freedom and serving as an instrument of political dispute.” The note was published in outlets such as Globo and Folha.

According to the lawyers, the purpose of the charges is to disqualify the journalistic work of The Intercept Brasil. The defense says it is preparing a suitable judicial measure.

In the investigation that followed the hacking of cell phones of Brazilian state authorities, the Federal Police (PF) had indicted six people. The PF inquiry says it is not "possible to identify the moral and material participation of journalist Glenn Greenwald in the crimes investigated." 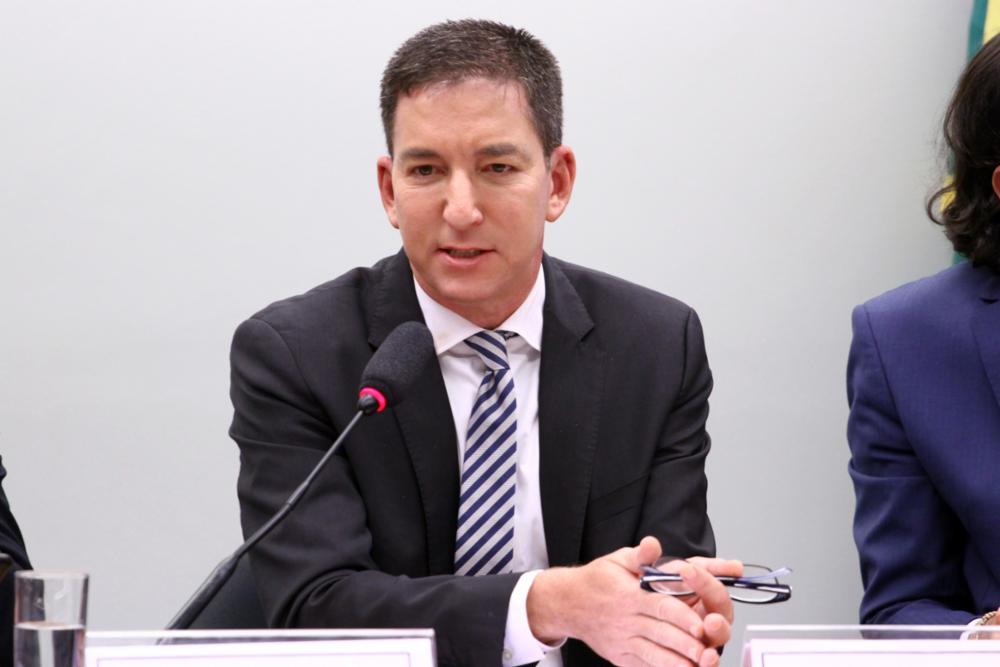 Greenwald: “I did nothing but my job as a journalist.” (Vinicius Loures/Câmara dos Deputados

"Less than two months ago, the Federal Police, examining all the same evidence cited by the public prosecutor, explicitly stated that not only have I never committed any crime, but I have also exercised extreme caution as a journalist […]. Even the Federal Police, under the command of Minister Moro, said what is clear to anyone: I did nothing but my job as a journalist — ethically and within the law," the journalist wrote in a note published by Folha.

In the charges, attorney Divino de Oliveira considers the contact between Greenwald and his source happened while there was still “criminal practice.” He called for the establishment of a criminal case against Greenwald for hacking, illegal interception of communications, and criminal association. Contradictorily, he also argued that the STF's decision was honored, since the journalist was not the target of the investigations. Read the report in full.

Divino de Oliveira uses as a main argument a conversation in which Luiz Molição, also charged, asks Greenwald about whether he should obtain data from other authorities. The journalist replies that he cannot give him advice, but he guarantees that he will exercise the constitutional right to protect his sources. He also accuses Greenwald of directing Molição to delete the files.

After the charges were announced, The Intercept Brasil published a note in support of its journalist. In it, the website states that the prosecutor tries to criminalize Brazilian journalism. "There is no democracy without critical and free journalism. Brazilian society cannot accept abuses of power like this," the statement says.

The outlet also argues that the charges are a political act. "It is perplexing that the Federal Public Prosecutor is playing a clearly political role, going against the absence of informed evidence in the Federal Police inquiry," it said.

The Brazilian Association of Investigative Journalism (Abraji) said, through a note, that the charges against Greenwald violate press freedom.

According to the organization, the conversations presented as evidence do not confirm the prosecutor's accusations that the journalist had advised the group to delete files, in order to hinder the investigations.

"The journalist only says that he has already stored the messages in a safe place, that he sees no need for the group to keep the files and expresses concern to protect the identity of Molição’s group as the source of the reports. Greenwald does not suggest, orient or order the destruction of the material (...) The journalist does not say that the group should delete messages to avoid being caught by the authorities," Abraji said.

The association also says that the charges have the sole purpose of embarrassing and disqualifying the professional. "Twice, the prosecutor refers to Greenwald with the term journalist in quotation marks, as if he does not qualify as such – and as if it were up to an MPF member to define who is a journalist and who is not," wrote the entity, which asked the court to reject the charges.

"It is absurd that the Federal Public Prosecutor abuses its functions to persecute a journalist and, thus, violate the right of Brazilians to live in a country with a press that is free and capable of exposing irregularities from public agents," Abraji said.

The Brazilian Press Association (ABI) also said that the charges are absurd and expressed solidarity with the journalist, in a statement. "The denunciation, completely inept, represents an attack on the Brazilian Constitution, a disrespect for the STF and the Federal Police, as well as a grotesque attempt at manipulation, to try to condemn the journalist," it said.

The President of the Chamber of Deputies, Rodrigo Maia, also spoke out against the charges via Twitter. "The charges against journalist @ggreenwald are a threat to press freedom. Journalism is not a crime. Without free journalism there is no democracy," he said.

According to a publication in Folha, Minister Gilmar Mendes, of the STF, considered that the charges disrespect his decision of August last year. Globo heard from Minister Marco Aurélio Mello, also from the Supreme Court. "I am very afraid of any act that may imply an inhibition of the right-duty to inform. This is bad for society," said the minister, who stressed that he had not read the charges against the journalist.