Growing up among the Misak, an Indigenous people in the southwestern region of Colombia, Cauca, Diana Mery Jembuel Morales always felt a sort of shallowness in the way her community was covered.

Journalists from national or international media, she described, would parachute into the notoriously conflict-torn region without a base understanding of the traditions and issues that made up their reality. They would simply come for a few days, take photos and never be seen again.

Neither would the articles written about them.

“There’s this massive gap because the journalists are in cities and they’re at their desks,” she explained to LatAm Journalism Review (LJR). “When a non-Indigenous journalist comes, communities don’t trust them because they don't know what information is going out and who it's publishing with or why.”

But a new initiative is working to bridge that gap.

The project is called Red Tejiendo Historias, or The Story Weaving Network.

It’s made up of around 230 members across Latin America from Argentina, to Colombia, to Guatemala, to Mexico.

Paola Jinneth, coordinator of the network, said it was born in Colombia in 2019, launched by Agenda Propia, a news organization investigating issues connected to minority and Indigenous groups.

“There are all of these stereotypes, mishandling of information about their world views, their beliefs, their lands, so they began to create spaces for conversation through webinars,” she told LJR.

They would host trainings on things like how to use data to report on Indigenous issues, how to report on humanitarian disasters and conflict affecting Indigenous people, or conversations with Indigenous reporters who have created documentaries on their communities. 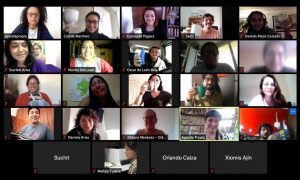 Meeting of the members of Red Tejiendo Historias. (Courtesy)

The journalists created a WhatsApp group so they could keep in constant communication..

Colombia is home to 102 Indigenous groups, according to the National Indigenous Organization of Colombia. Those groups often are intrinsically tied to some of the most important issues in the South American country. That includes things like protecting biodiverse landscapes from deforestation and exploitative interests, grapples for land power, human rights issues and victimization by armed group violence.

Yet, larger media in Colombia and internationally have historically focused on the latter, explained Jonathan Bock, director of Colombia’s Press Freedom Foundation (FLIP, for its acronym in Spanish).

This is partially because of the nature of conflict in Colombia, which takes place in rural areas and often intersects with Indigenous lands.

But, Bock told LJR, “They end up having a superficial narrative, and it's almost always related to conflict. And this, of course, stops there from being coverage of other topics that are just as relevant.”

Across Latin America, there are approximately 500 different Indigenous groups. The 50 million Indigenous people across the region make up approximately 8 percent of the region’s population, according to the United Nations Development Program.

Similar dynamics to Colombia’s play out across the region, especially in countries like Mexico, Guatemala, Peru and Bolivia, which have the largest Indigenous populations in Latin America.

Jembuel Morales, the Misak journalist and a member of the network, says she hopes they can change the narrative on Indigenous issues and create more meaningful reporting on communities like her own.

“Indigenous journalism is another way to visibilize and empower women and men who live in spaces that the non-Indigenous world doesn't understand,” she said. “So it's about making visible and vindicating the memory and rights of ancestral people.”

She said that the heart of such journalism is on-the-ground reporting, spending time with communities in their regions and understanding, not just the conflicts that often affect them, but their cultures and traditions.

With the webinars, the initiative slowly began to expand outside of Colombia, said Jinneth, the project coordinator.

When Mayan spiritual leader Tata Domingo Choc Che was killed in Guatemala in June 2020, accused of being a witch, the network did a online video campaign called #MiSaberTeDaMiedo, or #MyKnowledgeScaresYou. Indigenous journalists from across the region explained their cultural traditions and teachings in a video in order to curb stigmatization and disinformation.

Though each Indigenous community is unique, Jinneth said they began to see undercurrents in struggles each of their individual communities were facing. Things like deforestation on Indigenous land and violence against communities.

They began larger collective investigations into broader issues, launching grants to fund collaborative reporting projects on land and territory in the Amazon and Central America. Once finished, the stories will be published with Agenda Propia’s site and in other media across the region. 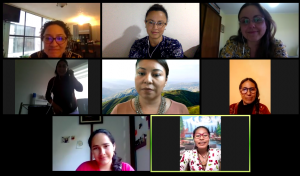 Today, they hope to expand into countries like Brazil and French Guiana, which speak different languages than most of the network, but are also important hubs for Indigenous groups.

“These beliefs and their own narratives, they have allowed us to, not just grow, but also create other methodologies, other ways of listening and other ways of relating to the interviewee,” Jinneth said.

In Latin America, journalism networks like theirs have become crucial in filling investigative gaps in emerging “news deserts,” zones that lack investigation or consistent coverage due to lack of news organizations, said Bock, FLIP director.

They also serve another purpose: generating security for reporters who may be targeted for investigations that make people in power or armed actors uncomfortable.

“It also means security, a way to avoid the risks that there are,” he said. “It's not infallible, but it helps strengthen these journalistic projects from the threats that they could receive.”

But larger than that, said Jinneth, is building a platform to lift up the voices of populations that have had their stories told by people from the outside to people on the outside.

“We think it’s important that these very communities begin to narrate their own stories, and they’ve been doing it, but with many challenges,” Jinneth said. “In the end, the person who tells the story, the person who does the reporting, they’re the ones who have the power.”