When Catalina Ruiz Navarro began her column 14 years ago with one of Colombia’s legacy newspapers, El Espectador, she noticed a disparity between her and all the other columnists at the paper.

While most of her colleagues were older, white Colombian men, often with higher doctorates, she was the only female columnist, a difficult mountain to climb for a young, 24-year-old writer.

That was the first time she began to truly recognize the lack of female voices in the media in her country, and more importantly a lack of coverage of issues affecting women. 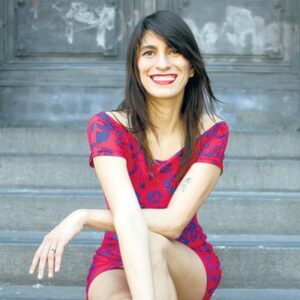 “One of the questions I asked myself at that moment was: What can I say better than all these 50-year-old men writing columns for El Espectador?” Ruiz Navarro told LatAm Journalism Review (LJR).

Her answer was to write about women’s issues. Specifically, abortion, which has always been a sort of taboo topic in the largely conservative Catholic country.

Now, more than a decade later, many of the same dilemmas continue to exist in Colombia and much of the region. But, Ruiz Navarro is part of an initiative seeking to change that narrative.

The project, Laboratorio de Historias Poderosas, or the Powerful Stories Laboratory, was born in early 2021 as a means of expanding traditional media narratives to include women and LGBTQ+ people in coverage.

The lab was created by Chicas Poderosas, or Powerful Girls, a feminist journalism collective in Latin America, and funded by the Open Society Foundation, a global philanthropic organization.

It gets together a group of journalists who each have a vision for coverage of groups whose voices have been historically excluded from coverage, and provides them resources and training to report those stories.

“We know that many of these topics that maybe aren’t the most attractive or are harder to tell aren’t made visible in the media, '' Belén Arce Terceros, editorial and communications director for Chicas Poderosas, told LJR. “For example, in the case of Colombia, what’s happening in the periphery and in rural areas.”

Arce Terceros, an Argentine journalist, said she had a similar experience to Ruiz Navarro when she was working at her old paper in Buenos Aires.

“It wasn’t a priority of the news organization,” Arce Terceros said. “Going out to search for and tell these stories wasn’t prioritized because there were topics that were hotter that generated more traction.”

The Colombian lab has published five different projects from 20 Colombian and Venezuelan journalists. The stories were published in various Colombian and Latin American outlets including 070, Volcánicas, Manifiesta and Cosecha Roja.

One digital piece published in text, photo and drawings tells the story of Daniel, a trans man who was denied the right to an abortion from a pregnancy caused by sexual violence in the conflict-torn region of Norte de Santander. The piece explored the challenges trans and non-binary communities face in getting the procedure.

Another, a podcast, investigates gender-based violence and sexual abuse of women and girl Venezuelan migrants along the Colombia-Venezuelan border. The women are part of an exodus of five million people from their crisis-stricken country and are often the most vulnerable to such abuse.

Another, told digitally through an online photo and graphic book, text and audio, tells the stories of Afro-Colombian midwives in the highly remote region of Nuquí, Chocó, whose work is crucial because of the lack of medical infrastructure in the zone.

Before reporting the stories, the journalists were given training, not just in fact-checking, but also in how to cover sensitive topics and work with vulnerable sources.

“There are a ton of general workshops on data visualization, but not many that teach what we do when we approach a source, when we speak to a person that has gone through violent situations and now is telling us their story,” Arce Terceros said. “We want them to feel safe, heard and respected.”

The stories were also reported using non-traditional journalistic techniques, with a focus on “solutions journalism,” which is not just reporting on societal problems, but the solutions to those problems.

The reporting also often happening through what Ruiz Navarro – the editor of the Colombian laboratory– described as a “feminist journalist” perspective. 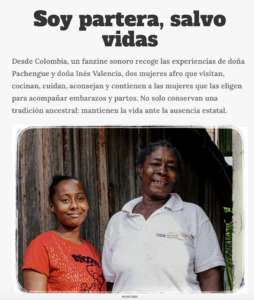 A story published by Cosecha Roja as part of the series. The headline: "I am a midwife, I save lives." (Screenshot)

The concept, she explained, is reporting stories about women and LGBTQ+ communities through a feminist lens from the get-go, and with a focus, not just on coverage of those communites, but on using the reporting to advance the rights of of the people they are reporting on.

That perspective has become even more crucial during the pandemic. Before COVID-19, things like gender-based violence, gender pay gaps and lack of access to medical services for women and LGBTQ+ populations were already massive problems in Latin America.

During early pandemic lockdowns rates of violence sky-rocketed and have stayed high, and endemic pay gaps have only grown, threatening to affect women long-term.

While the project began in Colombia, Chicas Poderosas is expanding it across the region.

Already, Arce Terceros said the lab is working on similar projects in Ecuador, investigating femicides – killing women because of their gender – and violence against LGBTQ+ communities. Soon, they plan to expand to Brazil to report on women’s health and to Mexico to report on “machista” violence and responses from civil society.

Arce Terceros said she feels that there has been “more space” for this kind of journalism to flourish, and that they hope that by giving women tools to report the stories, they will slowly start moving into the mainstream.

“The stories that we can tell, the realities we can make visible … what it’s going to do is put these topics on the agenda, and not just generate conversations on a national level, but on a regional level.”