Four White House correspondents representing four media closed out the 20th annual International Symposium on Online Journalism (ISOJ) on April 13 with a discussion about covering the unpredictable nature of President Donald Trump in the Twitter age. 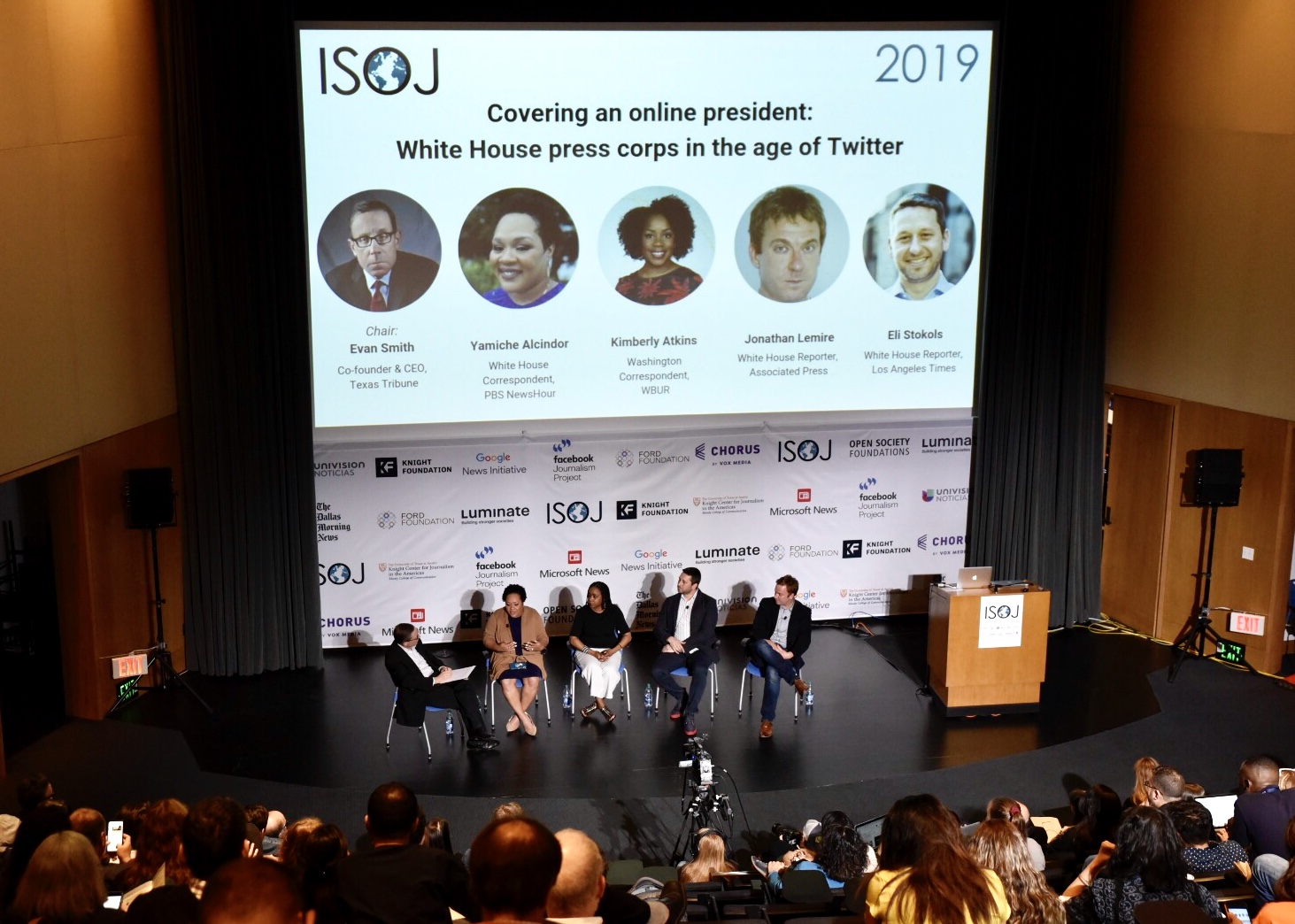 Evan Smith, co-founder and CEO of the Texas Tribune, chaired the panel “Covering an online president: White House press corps in the age of Twitter.”

Given that Trump is at the center of all these changes, Smith kicked off the panel by asking: “What does his utilizing, or someone say weaponizing, the online space to conduct the serious business of United States mean for the work we do and for the public we serve?”

As a first-time White House reporter, Stokols had the suspicion that what he would be doing with the Trump administration would be different from before. The complete lack of process makes people mostly unaware of what Trump is really going to do, he said.

“The major way of difference in my experiences is rhythm of covering the administrations from the White House,” Atkins said. “With this presidency, you absolutely cannot plan out because you don’t know what’s coming one day and the next.”

Lemire, who covered the president for the New York Daily News when Trump was just a New York celebrity, said “he has not changed. He still cares about the same things. He cares about being in the news and generating the headlines. He just wants to be talked about. And we, news media, have to adjust to that.”

When Alcindor transitioned her career to political news reporting from breaking news, she never expected that covering politics would be like “covering a hurricane every day, because every single day, you have no idea if the White House’s schedule will change.”

Atkins said the fundamental shift of covering politics now is that journalists cannot take information from the White House for granted, but instead journalists need to fact-check almost everything.

“Now you see officials and you talk to officials, and you know sometimes they are telling you something that is not true.”

Adding to that, Lemire raised the dilemma of covering Trump whereby journalists should hold the president accountable but interrupting everything he says can be difficult. “What he says, even it is not true, is still the news to be covered, but it has to be covered in a correct way.”

Alcindor expressed the same concern, that “we news organizations decide what’s worth fact-checking, because you can’t fact-check everything or every tweet.”

The online president creates various challenges for journalists who work in television, radio, print and the wire services. Unlike print or wire journalists who can report in-depth, Alcindor said television reports on the updates of presidential tweets, though efficient, can lack context.

On the other side, Lemire said the Twitter aspect echoes what a news wire service sticks to: moving fast and briefly. “The speed of this president, the way he changes the story so many times in a single, not just day but an hour” turns the news cycle into a “news minute.” In such a short time window, he added, merely reporting what Trump says can be misleading if context isn’t added.

Given that Trump is a constant topic on cable news, Stokols highlighted the fierce competition among news organizations. “Everybody could write the same story about the tweets. How do you add value?”

The vast changes in the political news reporting are driven not only by Trump’s presidency, but also the shifting landscape of the news industry as a whole, Atkins said. She noted that with enough time, budget and resources, reporters can get beyond the daily tweets and address the implications of the policies.

The economic incentive shapes what political news should be covered, Stokols said. “If we stop covering Trump, people would change the channel.”

The panelists also discussed the relationship between the White House and the press. “The Trump administration is notoriously slow in engaging with questions,” Lemire said. “They are afraid of getting ahead of the president and they might get contradicted at any time.”

Although White House briefings have become rare occurrences, “I believe briefings matter,” Alcindor said. “Set time, sit down, and have the American public hear the questions, watch the administration engage with media is important.” The briefings also give opportunities for journalists to ask questions and get things clearer, Alcindor added.

Stokols said, “We don’t want the briefings to go away. We all want access to officials and the president.”

Stokols commented that journalists’ constant fact-checking on Trump’s tweets inadvertently perpetuate the president’s constant claims that “the press is the enemy.” This makes fact-checking difficult because journalists need to be conscious of how this practice is being perceived and used.

Livestreaming of ISOJ in English and Spanish can be found at isoj.org