The in-person component of the 21st ISOJ has been canceled.

Reporters on the front lines of election coverage face a myriad of new challenges created by digital media. They work hard to keep voters accurately informed at a time of information overload, disinformation, misinformation and distrust of the press. 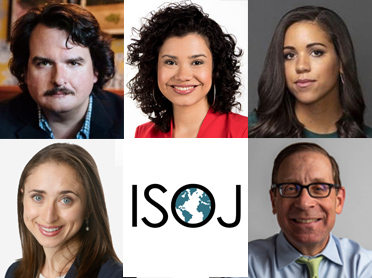 Attendees of the 21st International Symposium on Online Journalism (ISOJ) will have the opportunity to hear first-hand from a group of recognized journalists who have been navigating those hurdles and more on the campaign trail.

Reporters from leading U.S. news organizations will speak on the Saturday, April 25, panel, “Covering electoral campaigns in the digital age: Challenges of the 2020 presidential election in the U.S.,” chaired by Evan Smith, co-founder and CEO of The Texas Tribune.

Weigel covers the U.S. Congress and grass-roots political movements for The Post. He previously launched the Bloomberg Politics site and was a reporter for Slate, writing the blog “Weigel” and hosting an interview podcast. Prior to that, he focused on the American conservative movement for Reason magazine and The Washington Independent.

As a reporter covering the 2020 presidential campaign, Glueck focuses on the Democratic primary. This is not her first time covering elections, as she reported the 2018 midterms for McClatchy’s Washington bureau and the 2012, 2014 and 2016 campaigns for POLITICO.

McCammond, who was featured in Glamour magazine in February 2020 for her political coverage, has been assigned by Axios to cover the 2020 presidential election. She has broken stories on Trump’s private schedules and Executive Time, leaks from the White House to Congress regarding Trump family security clearances, and more. McCammond also covered the 2018 midterms for Axios. Previously, she reported for the website Bustle, also focusing on the DNC, presidential debates and more.

Barrón-López is covering the presidential race for POLITICO, focusing on demographic changes in battleground states, and centering much of her reporting on race and ethnicity. For the 2018 midterms, she covered the Democrats for the Washington Examiner. Previously, she reported on U.S. Congress for the Huffington Post, and energy and environment policy for The Hill.

Registration is now open for the 21st ISOJ. Early bird rates will be available until March 14.

Journalists, media executives, scholars and news enthusiasts from around the world will gather at the University of Texas at Austin campus from April 24 to 25, 2020. Since 1999, this annual conference has focused on the impact of the digital revolution on journalism, combining perspectives from professionals and academics.

ISOJ is organized by the Knight Center for Journalism in the Americas, which is part of the University of Texas at Austin’s Moody College of Communication.