Covering the U.S. 2020 presidential election: Journalists discuss the 'absence of on-the-ground reporting' and the 'weirdest campaign ever'

Reporters from leading U.S. news organizations spoke during a panel of the 21st International Symposium on Online Journalism (ISOJ) about some of the challenges that the coronavirus crisis has imposed on journalists covering the 2020 presidential election, like the almost absence of on-the-ground reporting and the lack of opportunities to interview voters in person.

The panel "Covering electoral campaigns in the digital age: Challenges of the 2020 presidential election in the U.S", was chaired by Evan Smith, co-founder and CEO of The Texas Tribune. Smith defined this as the "weirdest campaign ever," not only for candidates and voters, but also for the press.

He explained that this campaign is happening during a "three once in a generation crisis playing out at the same moment: public health emergency, economic collapse and reckoning over race." 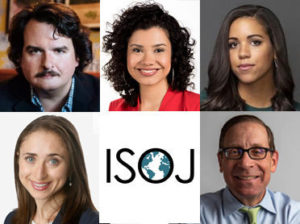 "It's weird for the press, who must cover news even as they are strained in many ways in their abilities to do their jobs, but do them we must," he said.

The panelists highlighted how they were used to travelling a lot during the campaign season and that now they have to do most of the coverage from home, with rare exceptions. They also stressed how important talking to voters in person is for their work and how different it is to do that online.

"We were on the go on a really intense swing leading up to Super Tuesday from Virginia, Texas to California… Then we came back, there was a little bit more campaigning in places like Michigan and then everything just came to a stop. So it's weird. [...] The candidates are slowly trying to get back out there about once a week, to be a little bit more in public. And the press is of course trying to figure out how to cover that and, more broadly, what is happening in the country when there are so many logistical and health considerations," said Katie Glueck, national politics reporter at The New York Times. She mentioned that she did some travelling recently to cover stories, but that the default was quarantining like the rest of the country.

Alexi McCammond, political reporter at Axios, said they were used to travelling a lot, living out of a suitcase, and suddenly due to the pandemic they are now stuck at home, which changes the work dynamic. "We are trying to figure out how to talk to voters, which is something I love doing, that I felt helped my analysis, because you got a real sense of how people actually felt, which helps to better understand the polls and numbers. I really miss doing that," she said. McCammond added she is doing focus groups with voters online on Zoom, but the experience is very different from talking with them in a rally or a campaign stop.

David Weigel, national political correspondent at The Washington Post, said he managed to travel a little bit recently, but not as nearly as he would do before. Even though he has been trying to simulate those talks over the phone, he says it's not the same.

"What I've been missing is some of the gut check you get from just leaving the internet to go talk to people. What I always liked is, beyond talking to voters at the rallies, is seeing what was penetrating, what was on local news and local papers. I am missing the random interactions with voters that, as unscientific as they are, are super helpful. So I had to find other ways to convey the totality of the campaign that don't involve meeting people in public."

Smith said that reporters are having to adapt to a new reality of the almost "absence of on-the-ground reporting," trying to come up with different ways that simulate those in-person conversations.

More than one reporter said that they have been paying close attention to what voters are asking in the Q&A section during zoom meetings with candidates. Laura Barrón-López, national political reporter at Politico, mentioned that she is keeping closer contact with her sources. "Just leaning on all of my sources constantly, having as many conversations as possible, especially with grassroots organizers or people that can put a check on the DC bubble. Just making sure that I am getting as big of a picture as possible," she said.

Barrón-López also explained that the pandemic meant that she had to include new beats, like covering the coronavirus crisis. "I also have now expanded my beat to cover coronavirus and its disproporcional impact on Black, Latino, Native American populations. I've enjoyed it, it's an important story to be covering, but at the same time I'm still covering the Black Lives Matter movements and, unfortunately, we are just not able to do the same type of reporting we were used to doing, like getting on airplanes and going to events," she said.

During the panel, the reporters also discussed the attacks against the press, misinformation and disinformation, as well as how the political polarization affected journalists and their work. To watch the panel, click here. To register or to read more about upcoming panels, visit isoj.org.