On March 7, 2017, a riot broke out at the Hogar Seguro Virgen de la Asunción shelter for abandoned and abused children and adolescents, in the municipality of San José Pinula, Guatemala. For years, there had been complaints against the institution because of overcrowding, poor nutrition and sexual violence.

The riot lasted until the following day, March 8, when a group of minors attempted to protest the abuses to which they were being subjected. In an attempt to control the protest, Hogar Seguro staff locked them up.

A group of more than 50 girls were confined to a 26-person room where they were to spend the night. Faced with the overcrowding and the desperation of not being able to go out even to the bathroom, one of the girls set fire to one of the foam mats they had been given, in order to draw the attention of the authorities outside.

The fire spread rapidly and caused a blaze that lasted several hours. Firefighters had difficulty entering the site because most of the entrances were locked. A total of 41 girls and adolescents were burned to death, while 15 survived with serious injuries.

Five years after the tragedy, several officials have been implicated but no one has been sentenced. The legal proceedings do not seem to be moving forward. In addition, the issue has been gradually disappearing from the media.

For the independent digital news outlet Agencia Ocote, the Hogar Seguro tragedy is an emblematic case of the abuses and violence experienced by women, especially girls and adolescents, in Guatemala. That is why it set out to do a coverage that would put the magnifying glass back on the case, revisiting it from new angles.

The result was "No fue el fuego" [It wasn’t the fire], a collaborative, multiplatform and transmedia journalistic investigation that seeks to serve as a documentary reference and archive of memory. It also aims to spark conversations and actions to raise awareness about the Hogar Seguro tragedy. The work, published between Nov. 2 and Dec. 10, 2021, was recognized with the 2022 Gabo Award in the Coverage category.

The jury highlighted the "creative and coherent" way in which the Agencia Ocote team used "to its fullest potential" a wide variety of formats and narrative languages. This, together with outstanding reporting, allowed the work to revive the Hogar Seguro case and present a definitive story.

For its authors, the main innovation of "No fue el fuego" was to achieve a convergence of different languages in a harmonious way and to take the investigation to other spaces, beyond the digital.

"It's not like we invented a new language or anything like that, but I think we managed to mix these diverse formats under a shared tone, a shared essence," Alejandra Gutiérrez Valdizán, director of Agencia Ocote, told LatAm Journalism Review (LJR). "It is part of Ocote's DNA, this search to speak about reality from diverse angles. In fact, it’s our slogan."

The special is made up of in-depth feature stories, a memorial album with profiles of the victims, a timeline with newspaper records, a graphic feature story, a series of podcasts, and a video documentary.

The feature stories cover different aspects of the tragedy, from the mourning caused by the death of the 41 teenagers to the different irregularities in the judicial process.

The documentary is entitled "Niñas / Somos el fuego" [Girls / We are the fire] and was made by journalists and documentary filmmakers Victoria Bouloubasis and Mónica Wise Robles. Throughout the film’s 34 minutes, some survivors of the tragedy tell in their own voices what happened at the Hogar Seguro. 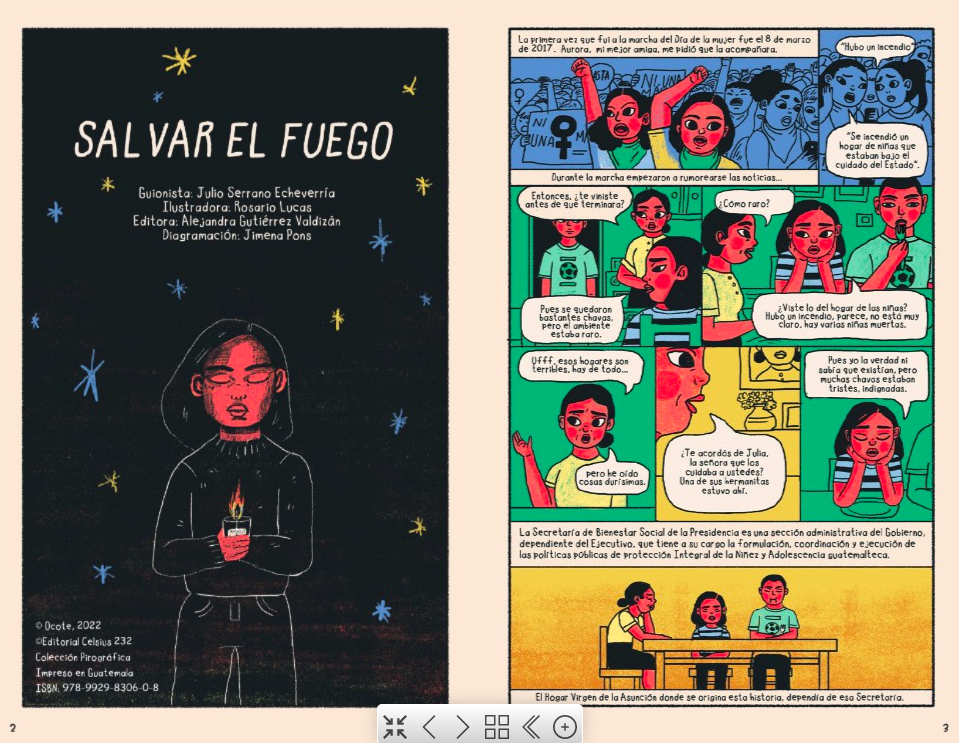 The graphic story, entitled "Salvar el fuego" (Saving the fire), tells the story of the fire through vignettes in a narrative line that navigates between fiction and non-fiction. The material has both digital and printed versions, the latter distributed free of charge at events organized by Agencia Ocote, but is also on sale in bookstores in Guatemala.

The diversity of formats and platforms of "No fue el fuego" was designed to reach all types of audiences. While the graphic feature story and the podcasts were conceived for young audiences who barely know about the tragedy, the in-depth reports and the timeline were aimed at specialists and academics in the social sciences interested in studying the subject, Gutiérrez said.

"Everything revolved around the same theme, telling it in different ways," Gutiérrez said. "Each of those products or those formats served a very specific purpose."

But in addition, the work transcends the digital and even journalistic terrain. "No fue el fuego" includes a traveling art installation composed of 41 kites, each with a hanging key with the name of the girls who lost their lives in the tragedy. It also includes art pieces that address the events, curated by artist and activist Maya Juracán. The installation has been exhibited in important places in the country, such as the Casa de la Memoria Kaji Tulam, in Guatemala City.

At the same time, Agencia Ocote created an embroidery workshop for girls, in which they make embroidery related to the theme of the journalistic work. Both activities, said Gutiérrez, are memory exercises to generate conversations about the tragedy, but also as alternative ways of distributing the special.

"In the exhibition, we also project the documentary and there are headphones to listen to the podcasts, and all the QR codes to link to the [investigation] page," Gutiérrez said. "Being super clear on what the journalistic work is and what are the subjectivities, we believe we can also spark these dialogues and these alliances between the journalistic and the artistic to continue disseminating the information and suddenly reach people in other ways."

The production of "No fue el fuego" was made possible thanks to funding from the ACTuando Juntas Jotay program. As a result, Agencia Ocote was able to bring together a team of 17 professionals —including journalists, documentary filmmakers, designers, and artists ― the vast majority of whom are women, some of whom continue to cover what stems from this issue.

The most difficult part of making "No fue el fuego", Gutiérrez said, was reaching out to the survivors and the families of the young women who died. Not only because of the enormous pain and trauma that the fire at the Hogar Seguro represented, but because in the course of five years, they have faced an ineffective justice system that has turned its back on them.

For this reason, the Agencia Ocote team's mission during the treatment of the information was to avoid at all times re-victimizing the victims and survivors of the tragedy. On the contrary, the special tries to honor the life of each of the deceased girls. For this reason, they decided to include a Memorial section, with brief profiles of the 41 victims in a narrative journalistic format, coordinated by Mexican journalist Daniela Rea Gómez, who has experience in covering issues of violence. 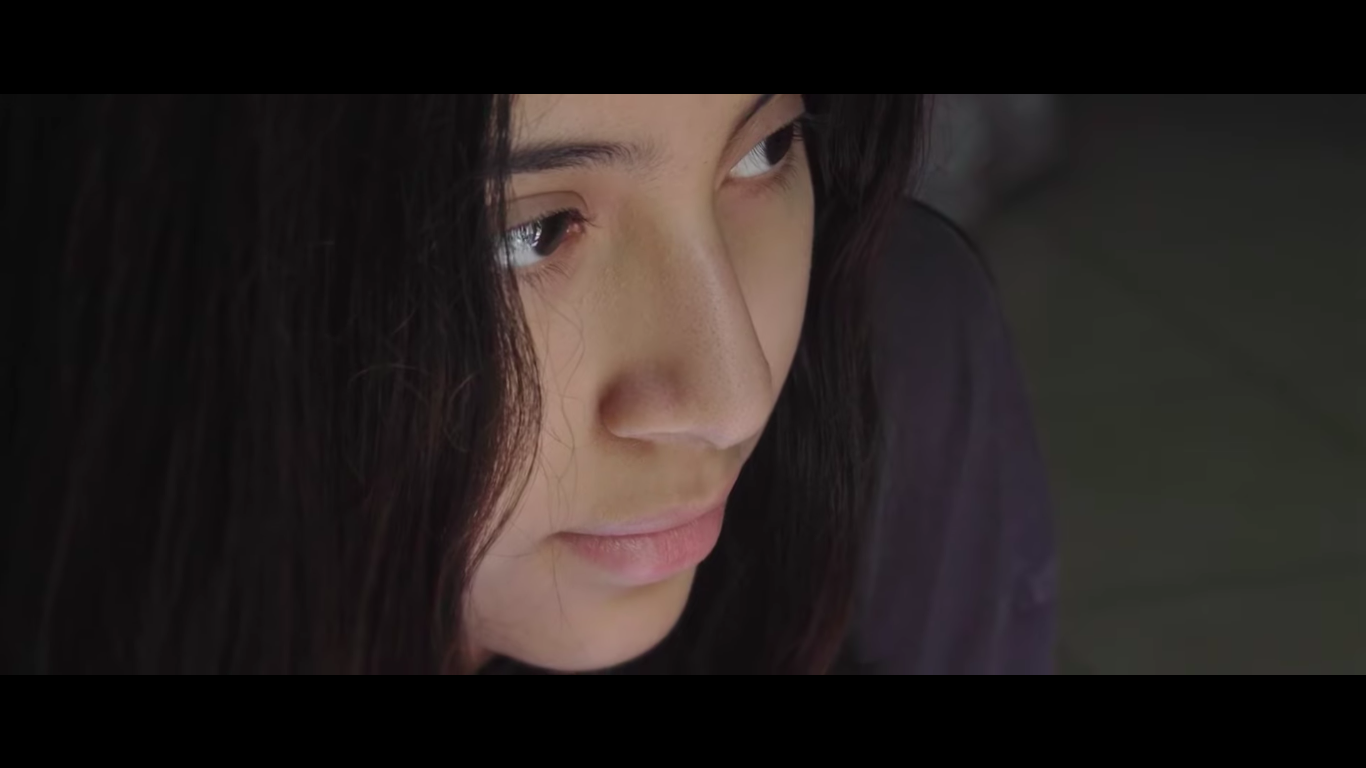 In the documentary "Niñas / Somos el Fuego", directed by Victoria Bouloubasis and Mónica Wise Robles, survivors of the tragedy narrate in their own voices what happened at the Hogar Seguro shelter. (Photo: Screenshot)

"At all times we set out with the idea of not revictimizing and in that sense always showing them respect, so they are not just figures. We thought we should leave behind that record of them, but not from a place of victimization," Gutiérrez said. "We were also careful to expose the human side of them, not just the victims' side.”

Although so far the investigation has not had a direct impact on the case’s court rulings, the families of victims and survivors have expressed gratitude to Agencia Ocote for giving visibility to the case, in order to put pressure on the authorities.

"They [the victims' families] keep coming from far away places, spending a lot of money, with an emotional toll, to demand justice. The mother of one of the girls told us 'sometimes not even the media attend the trial,'" Gutiérrez said. "To listen to the families of the girls who died or the survivors say 'thank you for continuing to tell this story' is very rewarding."

Reconstructing the tragedy with bits and pieces

"No fue el fuego" also had the wisdom to make an almost forensic reconstruction of what happened on March 8, 2017 at the Hogar Seguro Virgen de la Asunción with pieces that were scattered.

The podcast was the format that Agencia Ocote chose to present this reconstruction that ended up becoming a non-fiction true crime miniseries of four episodes [In Spanish], between 30 and 40 minutes each.

"There were records of what happened, such as press releases, videos, things that appeared on television, but there was no record that brought it all together. So, we came up with the idea of making a kind of miniseries, a chronicle that would present a minute-by-minute account of what happened," Melisa Rabanales, a former journalist at Radio Ocote, the podcast section of this Guatemalan news outlet, told LJR.

Rabanales was lucky enough to find audios of some of the girls who died in the tragedy, some of which were presumably their last voice recordings before they died. That, added to original interviews and material from other media, made up a complex curatorial work that became one of the most consumed sections of the special so far.

The journalist said it was a huge challenge to listen to hours of raw and explicit material and put together a story that maintained the greatest possible sensitivity and respect for both the protagonists and the audience.

"I got to build a story out of bits and pieces," Rabanales said. "It was an extremely rigorous editing process of knowing what to include and what not to include. We didn't want to revictimize either, but it was also important to name them [the victims]. We had big discussions around some audio where you can hear some screams at the moment when the burned girls leave the classroom. I think that was one of the biggest challenges."

For Rabanales, the main innovation of this podcast is having managed to create a sound story with the victims' own voices as a true crime, a genre that has not been explored in Guatemalan journalism and which is just beginning to be experimented with in Latin America.

Among the activities derived from "No Fue el Fuego" are an art installation, the live presentation of a podcast and an embroidery workshop for girls. (Photo: Twitter @AgenciaOcote)

"This genre allowed, even with such a difficult topic, for it to be palatable. I think there is a need, at least in Latin America, for many more narrative podcasts," she said. "Journalism does not have to fight with narrative, it does not have to be boring. I think that in the audiovisual area we are a little bit ahead. For example, we see the non-fiction documentaries that are being made on Netflix, but in audio I think we are a little bit behind."

The "No fue el fuego" miniseries is the most listened to podcast in Radio Ocote's history, with more than one million plays, according to Rabanales. In addition, the material has been presented as a live adaptation at events such as the 2021 Podcastinación Festival and at this year's International Women's Day celebration in Guatemala City.

Both Rabanales and Gutiérrez agree that the special "No fue el fuego" has managed to revisit a story that has been told many times in a way that builds audience empathy for the tragedy.

"That's one of the things this project does and why it has quite an impact," Rabanales said. "This issue is an open wound in Guatemala because to date no one has been convicted yet. And we journalists also have wounds we know we must somehow heal. I think that, both for the audience and for journalists, [this special] was something that was needed."