The Internet and the digital ecosystem have generated great opportunities for press freedom, such as the development of collaborative investigative journalism or the relationship between the media and their audiences. Paradoxically, in the last 10 years, some of the greatest threats against freedoms of the press and expression, in general, have come from this digital world, explained Guilherme Canela, head of the Freedom of Expression and Safety of Journalists section of UNESCO, to LatAm Journalism Review (LJR).

Surveillance complaints, cyber crimes such as digital harassment – especially against women journalists, including sexual harassment – threats, harassment, doxxing, among a long etcetera is part of the lived experience of journalists.

With this analysis in mind, UNESCO chose the slogan "Journalism under digital siege" for this year's commemoration of World Press Freedom Day, which takes place every May 3.

“The idea is precisely to discuss what are some good practices that are happening in different parts of the world to deal with these issues. What are the roles of the different actors: government, judiciary, organized civil society, internet companies and the media when facing this issue,” Canela told LJR. “How can free, independent and plural journalism be practiced in this digital ecosystem while dealing with these digital threats?” 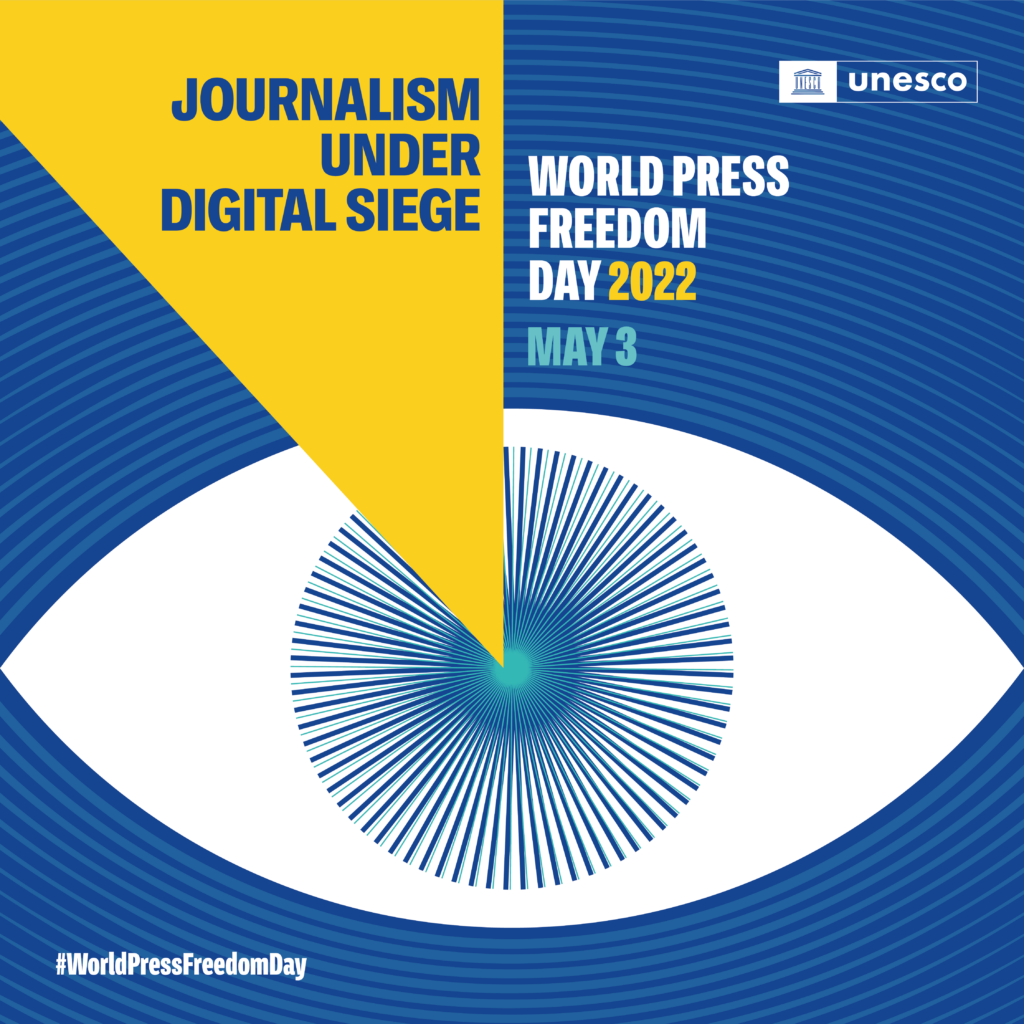 Both media and journalists and the community in general can join the commemoration.

For example, the main event of World Press Freedom Day, the annual world conference, will return to Latin America after almost 10 years. The conference, with a hybrid format, will take place in Punta del Este, Uruguay, from May 2 to 5. During these days, "the impact of the digital age on freedom of expression, the safety of journalists, access to information and privacy will be discussed," according to the UNESCO page.

It is still possible to register to attend in Uruguay or participate in the online sessions and activities.

As is customary, UNESCO makes different announcements and products available to journalists, but especially to journalistic companies, so they can be used free-of-charge.

However, Canela draws attention to another way of participating, taking advantage of the fact that this year also marks a "milestone": the 10th anniversary of the UN Plan of Action on the safety of journalists and the issue of impunity.

“When the Plan was created 10 years ago, in 2012, all these issues of digital challenges for the safety of journalists were not so clear, right? We knew that this would have to be evaluated, but exactly all these new issues of digital surveillance, of digital harassment, including the issue of how this all impacts the business model of the media, all these challenges for contemporary journalism, were unclear, especially from a security point of view,” Canela said.

“So, the point is that the World Day invites all actors to think about how we are going to redesign the implementation of the United Nations Plan of Action for the next 10 years, reinforcing this implementation, but also looking at these new digital challenges. That’s the call for the day: how do we create new public policies, new activities, new programs, projects, [and] strategies to deal with this view that journalism is under digital siege.”

World Press Freedom Day was proclaimed in 1993 by the United Nations General Assembly and is celebrated every May 3. Its origin is in the Windhoek Declaration of 1991 when African journalists wanted to highlight the pluralism and independence of the media.

Because the freedoms of the press and of expression constitute the core of UNESCO's mandate, this entity is in charge of leading its commemoration.

This year, the opening talk of the world conference entitled "Journalism under the digital siege," on May 2, will feature Claudia Julieta Duque. She is a Colombian investigative journalist who was victim of persecution and psychological torture by the country's defunct intelligence agency known as DAS. Given the impunity that surrounded her crime, Duque presented her case against the Colombian State before the Inter-American Commission on Human Rights (IACHR) in 2018.

"It is a huge honor to be invited by UNESCO to represent persecuted journalists in the world, during the opening talk of the conference," Duque told LJR. “In addition, I think this is also a key opportunity to somehow confront the owners and operators of these large social media companies and communication platforms, whose business is basically the storage, processing and collection of our data.”

Duque, who in 2014 already participated in the opening talk of the World Conference on this day, pointed out that this time "this has a very important meaning for me because it happens with the background of all this persecution from the UNP [National Protection Unit from Colombia]."

In the opening talk, Marcelo Bechara, Director of Institutional Relations and Regulation of Grupo Globo (Brazil), will also participate.

After this panel, the UNESCO/Guillermo Cano World Press Freedom Prize will be awarded to the Belarusian Association of Journalists (BAJ). Formed in 1995, in August 2021 at the request of the country’s Ministry of Justice and following the raiding of BAJ’s offices by police in Belarus, the Supreme Court of Belarus ordered the organization’s dissolution.

“By awarding the prize to the BAJ, we are standing by all journalists around the world who criticize, oppose and expose authoritarian politicians and regimes by transmitting truthful information and promoting freedom of expression. Today we salute and praise them; we find a way to say: we are with you and we value your courage,” Alfred Lela, Chair of the Prize‘s international jury, and founder and director of an Albanian media organization, said according to Unesco.

During the three days of the conference, there will also be room for parallel sessions, some of them focused on Latin America. For example, on May 2, the event "Follow-up of the Windhoek Declaration +30: The transparency of Internet platforms: an agenda for Latin America and the Caribbean" will be held by Observacom and UNESCO.

The Office of the United Nations High Commissioner for Human Rights and UNESCO will hold the regional event "Tenth anniversary of the UN Plan of Action on the Safety of Journalists and the Issue of Impunity - achievements and challenges in Latin America and the Caribbean.”

The panel will be attended by Claudia Julieta Duque; César Fagoaga, president of the Association of Journalists of El Salvador; Julia Gavarrete, journalist from El Faro; Juan Carlos Rojas, member of the National Union of Press Editors of Mexico; and Jeremy Dear, IFJ Deputy General Secretary.

To see the entire program of the world conference as well as register, you can visit the official page of the event.