The impunity of homicides against journalists in Brazil has been increasingly frequent in the interior of the country, according to a recent report from Article 19, "The cycle of silence: impunity in murders of communicators."

The press freedom organization analyzed 22 cases that happened between 2012 and 2016 and found that, in the period under study, the average population of the cities where the crimes were recorded decreased from 315,000 inhabitants to 50,000 inhabitants. 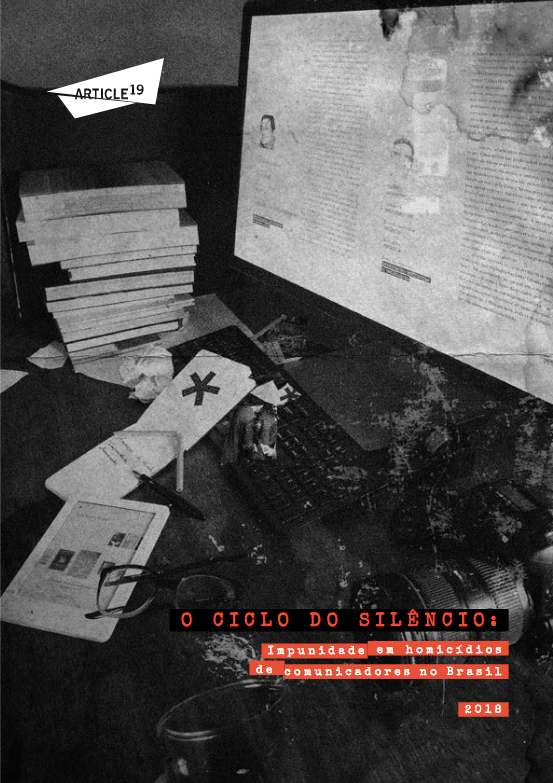 "Especially where they are most exposed to the discretion of local authorities, as in small Brazilian cities and peripheries, the voices [of journalists] have been interrupted by commissioned, sometimes barbaric, crimes that expose a true democratic rupture in the country," the report says.

Brazil ranks 10th in the Committee to Protect Journalists’ (CPJ) list of countries where murderers of media professionals are more likely to go unpunished.

One of the reasons for the high rate of impunity, according to Article 19, is the situation of vulnerability that Brazilian communicators are in, especially those in cities in the interior and from small outlets.

Most of the murders targeted bloggers (eight cases) and radio broadcasters (six cases). In the small cities of the country, internet and radio supply the demand for information in places where large news organizations have no reach. In these small outlets, journalists have no institutional or legal protection, according to Article 19.

In many of the murders analyzed by Article 19, the communicators were the owners of their own channels or outlets. This fact, according to the organization, increases the negative impact of the silencing of these voices, since the work that was done by these professionals ceases or decreases significantly after their death.

"These crimes have as their primary objective the elimination of the target communicator, but they have a much broader effect on all other people who come to fear the groups involved [in the death] and to limit their criticism of them," the report explains.

In 17 of the cases reviewed by the organization, the murdered journalists suffered some sort of threat prior to their death. "Many informants revealed that the victims were unable to apply personal security protocols or did not have state support when they sought the authorities, but feared for their lives and those of their colleagues and close relatives," the statement said.

Another important aspect that explains the "interiorization" of the murders of media professionals in Brazil is the proximity, in small cities, between the public authorities and the communicator. In the majority of cases found by Article 19, the main individuals suspected of having ordered the crimes were politicians (7 cases), police (3) or public agents (2).

"The main purpose of arbitrary executions of communicators is to physically eliminate people considered inconvenient because of the investigative action they take or criticisms that destabilize local power relations," the document said.

Police action in solving these cases offers several clues to explain the high rates of impunity in journalist murders, according to Article 19. The organization observed a "selectivity" of the authorities in investigating the cases, as well as the delay of forensic examinations and lack of professionals or high turnover of agents in the investigations, factors that harmed the investigations.

The low resolution of cases of murdered communicators, however, is not exclusive to Brazil. According to UNESCO, only 18 percent of homicides against media professionals are solved in Latin America and the Caribbean.

Recommendations for reducing the level of impunity

While considering the concerning Brazilian situation, Article 19 offers a series of recommendations to address the problem of impunity. Initiatives such as the establishment of police stations specialized in the investigation of homicide and organized crime cases, the strengthening of police controller institutions and the creation of support protocols for threatened communicators are among the suggestions.

The organization also highlights the role of civil society and media in the charge for resolving these cases of murdered journalists. "Whenever the media actively stepped in with the denunciation of the attacks and in the charge that authorities resolve the cases, this intervention was positive. The naturalization of lethal violence needs to be overcome by the exercise of citizenship," the document states.

Profile of the victim

Profile of those suspected of ordering the crime