Since the Panamanian newspaper La Prensa was founded in August 1980, it has covered dictatorships, military invasions, economic recessions, and political and social crisis in Panama’s history. Currently, the outlet is covering the pounding effects of the new coronavirus pandemic while it fights in court because of defamation lawsuits brought on by former presidents and politicians. 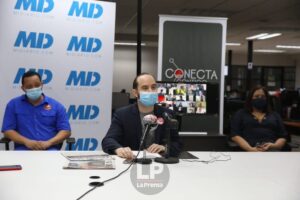 Diego Quijano, president of the board of La Prensa de Panamá at a conference on July 5, 2020. (Twitter.)

In an editorial celebrating its 40th anniversary, Diego Quijano, president of the Corporación La Prensa S.A. (corporation La Prensa S.A., or Corprensa) signaled that the threats continue. “Not with the weapons or the rods of the ‘80s, but this time from former presidents, former officials and public figures,” Quijano wrote.

Corprensa started the month of July with frozen bank accounts. The judge Lina Castro de León from the Fifteenth Circuit of the Civil Branch granted the request made by the lawyers of former Panamanian president Ernesto Pérez Balladeres (1994-1999), to freeze and sequester Corprensa’s accounts and financial assets for a total of $1,131,000 U.S. dollars. Corprensa received the notice on July 4 that it could not use its bank accounts.

During a press conference that Corprensa gave July 5, Quijano said that the company currently faces 12 civil lawsuits and 22 penal criminal lawsuits by politicians and former officials, including another former president of Panama, Ricardo Martinelli. These fines and indemnities would reach a total of $84 million, the businessman said during the conference.

In an interview with LatAm Journalism Review about the Pérez Balladares’ lawsuit, Quijano said “the Panamanian legislation unfortunately does not distinguish between claims of defamation and a commercial or financial debt, and it allows for this type of preventative sequesters as a way to assure the claimant that they will have all or part of their claim protected.”

The court’s decision to do the sequester was a preventive measure that opened up the trial based on a civil lawsuit for damages that former president Pérez Balladares filed against the journalistic corporation eight years ago, in 2012, according to IDL- Reporters. In his lawsuit, the former president asks for a reparation of $5.5 million U.S. dollars for moral damages.

Pérez Balladares denounced La Prensa after a series of articles published between 2009 and 2011 revealed presumed ties between the former president´s close and familial circle with a casino, whose concessions to operate were given during his administration. Outlets like La Estrella de Panamá and Panamá América also published stories regarding the subject, but were not sued by the former president.

Pérez Balladares said via Twitter that “the implementation of this sequester does not restrict the exercise of free journalistic activity” of La Prensa, “and much less the liberty of the press of the country.” The former president also pointed out that with this action he is only exercising his constitutional rights to defend his own rights, which he considers were violated by La Prensa.

However, La Prensa published that in his request for the sequestering of Corprensa’s property before the court, the former president would have asked for the sequestering of all of the production equipment and newsprint of La Prensa and Mi Diario, the corporation's newspapers. But the judge in charge decided to sequester the company’s bank accounts and financial assets, the newspaper pointed out. 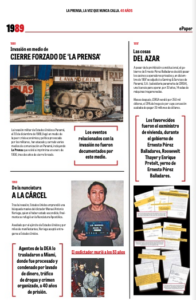 Corprensa has filed an appeal for reconsideration of the "disproportionate" sequester before the court, according to Quijano, but they still haven’t received a response. The corporation also presented a bond to the court for the same amount of the money seized, which was rejected.

At the end of July, the judge handling the case, partially lifted the freeze, because the accounts had more money than the original sequester order requested, La Prensa reported. "It is positive on the practical side, because we were able to make use of more than $300,000 U.S. dollars that were frozen for almost a month," Quijano told LJR.

However, the sequester “puts economic pressure on La Prensa, in addition to the ones that currently exist due to the production crisis of COVID-19 and the global crisis that communication outlets are facing,” Rita Vásquez, director of La Prensa, told LRJ.

Complaints of this sort, Vásquez said, can leave a media outlet’s operations in a state of vulnerability, affects the freedom of expression in Panama, as well as the right to information of Panamanians. "La Prensa is facing highly questionable figures, whose only interest is to silence this newspaper, and silence it forever."

Senior management has been able to resolve temporarily the corporation's payments so that the newspapers can continue running, Vásquez said, but this is unsustainable as time goes by if the accounts continue frozen for years while the process lasts.

“We consider that the court is not taking into account the effects that this has and, above all, the precedent that this establishes in the Panamanian democracy,” Quijano expressed.

“We continue to be in a state of alert because any of these thirty-four lawsuits that we are facing could be used to ask for a sequester,” Quijano said. “The judicial system and the civil code do not protect us, and anyone who wants to harm us and intends to silence us has the means to do so, means that are legal even though they go against the rights and they motivate self-censorship,” he concluded.