The revelation that groups of Rio’s city officials take turns guarding the front of health facilities to prevent journalists from doing their work has caused outrage among press freedom organizations.

A TV Globo report showed the organized efforts of the public servants appointed by the city. They act in the following way: they prevent recordings, intimidate interviewees and prevent criticism of municipal management. 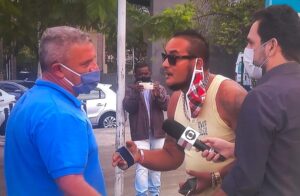 The actions against the press started eight months ago, but intensified with the COVID-19 pandemic. One of the involved told TV Globo, “We’ve had this mission there for more than eight months. Before, it was already in place, but when COVID started in March, we’re there every day. There is a team at healthcare unites to block the press.”

The report identified the officials and discovered that they are complying with a rigid work schedule and they are called out if they fail to prevent a journalist from doing their work.

According to the TV Globo report, someone who coordinated the work of the officials responded to the TV Globo news report, saying on WhatsApp: “Guys, it is very unfortunate that we [were not able to] prevent the story from airing… we can’t fail, without delay. We failed at [Hospital] Rocha Faria. Unacceptable.”

The president of the Brazilian Press Association (ABI) said the “episodes taken place at the entrances of various municipal hospitals in the last days show that these are not isolated incidents, but rather the mayor’s policy to constrain reports and citizens.”

“To embarrass the press in its mission to inform the population is an attempt against the freedom of expression and the fundamental right of access to information, especially during a global pandemic caused by the new coronavirus,” stated the Brazilian Association of Radio and Television Broadcasters (Abert).

Reporters Without Borders stated on Twitter that “to make matters worse, [what the municipality did] happens during a pandemic, even more so during a time in which information can save lives, is incompatible with democratic regimes.”

“The creation of organized groups whose objective is to sabotage the work of the press is incompatible with democracies, being typical of authoritarian regimes like those of Venezuela, China, Honduras, Saudia Arabia, among others, as well as facist movement like nazism,” the Brazilian Association of Investigative Journalism said in a release.

The National Association of Newspapers (ANJ), Human Rights Watch and the National Federation of Journalists also spoke out about the municipal government’s practice.

At least five participants from the groups were identified as city officials with salaries between $2,788 Reals to $10,500 Reals ($557.60 to $2,100 USD) a month. One of them, who coordinates the efforts, is the special adviser to Mayor Marcelo Crivella. One of the WhatsApp groups used to organize the efforts of the public servants is called “Guardiões do Crivella” (Guardians of Crivella), in an allusion to the name of the mayor.

An operation by the Rio Civil Police seized cell phones and computers from suspected members of the group on Sept. 1. On one of the computers that belonged to someone who coordinated the public servants' efforts against journalists, a list was found with 199 names of people who had participated in the group at some point, Yahoo informed. The Public Ministry (MP) has instituted a procedure to “investigate the possible practice of crimes that would have been committed by Mayor Marcelo Crivella,” informed UOL.