El Faro, the Salvadoran investigative journalism site that is a pioneer in Latin America, faces accusations of money laundering from President Nayib Bukele, and for weeks has been arbitrarily audited by the Treasury Department. In response, journalists and academics around the world have come out in defense of El Faro and of the independent press in El Salvador. 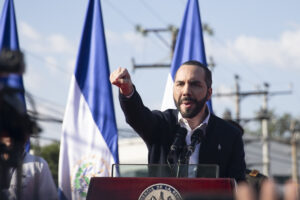 Salvadoran President Nayib Bukele during a speech prior to entering the Legislative Assembly along with the military on Feb. 9, 2020. (Photo: Carlos Barrera/El Faro).

On Sept. 24, Bukele made a national announcement about an alleged open investigation against El Faro for money laundering, in addition to delegitimizing the journalistic work of El Faro, Revista Factum and Gato Encerrado.

El Faro has not received official notification from the Attorney General or the Treasury Department about a money laundering investigation against it, said Jose Luis Sanz, director of El Faro, to LatAm Journalism Review.

“The President wants to destroy our credibility and is using all the tools the State gives him,” Sanz said.

About 600 journalists and intellectuals from 47 countries signed and sent a letter to the Special Rapporteurship for Freedom of Expression of the Inter-American Commission on Human Rights (IACHR), in defense of El Faro.

“We express our most energetic rejection of the escalation of attacks against the independent press of El Salvador and the rule of law exercised by the president of that country, Nayib Bukele. This climate of harassment and stigmatization of the media that monitor the powerful has intensified in recent weeks and reached unprecedented levels," said the statement, which was addressed to Rapporteur Edison Lanza.

The jury of the prestigious Columbia University Maria Moors Cabot journalism awards issued a statement strongly condemning the increase in attacks, threats and intimidation by the Salvadoran government against El Faro and its founder, Carlos Dada. In 2011, Dada received the Cabot Award for excellence in journalistic work.

“It is alarming that President Nayib Bukele used a national television speech on Sept. 24 to attack Mr. Dada personally and to announce that El Faro is under investigation for ‘money laundering and tax evasion;’ a clear act of intimidation incompatible with democratic principles. In addition to Mr. Dada and El Faro, President Bukele and his administration and followers, including aggressive trolls in social media, have been systematically attacking other journalists and media outlets, including La Prensa Gráfica, El Diario de Hoy, Revista Factum, Focos and Revista GatoEncerrado,” the jury wrote.

Regarding the audit of El Faro, Sanz said it is not normal and coincides with the preparation and subsequent publication of an El Faro report from early September.

The report revealed that the current Salvadoran president Nayib Bukele allegedly negotiated prison benefits with the MS-13, the largest criminal organization in the country, in exchange for a reduction in homicides and electoral support for the municipal and legislative elections of February 2021.

Bukele denied having negotiated with the gangs and questioned El Faro's credibility, calling it a "pamphlet.”

According to Sanz, the tax auditors of the Treasury have asked El Faro for their tax returns for the years 2014, 2016, 2017 and 2018. In addition, he said, they have asked them for all of their minutes of meetings of the board of directors for 2014 and contact information for all subscribers.

“We know that the Government already knew that we were going to publish the investigation on its negotiation with the Mara Salvatrucha and that day that we were going to publish, they advanced a new request, and in that new request they ask for a lot of more information that includes our exchange of reports with donors, that is to say, intermediate reports, project progress reports, things that have nothing to do with taxation,” Sanz said.

Consequently, El Faro filed an application for amparo before the Constitutional Chamber of the Supreme Court for the “aggressive audit” from the Treasury. They also requested precautionary measures to prevent the ministry from asking them for information that is not related to their tax returns.

The Center for Justice and International Law (Cejil), along with six other international organizations that defend the rule of law, rejected the government’s attempts to criminalize journalists from El Faro. "The attacks against El Faro take place in a context in which freedom of expression and the independent work of the press have been diminished."

In its note, Cejil recalled that before the accounting audit that the Treasury Department undertook against El Faro, La Página news portal accused one of the El Faro journalists of committing sexual assault against a colleague. El Faro denied it. 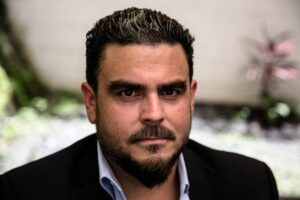 Another Salvadoran journalist Héctor Silva, co-founder of Revista Factum and Guatemala-based collaborator of the InsightCrime news organization, who has been targeted by Bukele on social media since his administration began, learned in early September through the site La Página that there allegedly was a money laundering investigation against him from the attorney general.

According to what Silva told LJR, when he called the Attorney General's Office, he was able to confirm that there is no open case against him. The mechanism of the current government and its cabinet, the journalist said, is to circulate false news to attack the credibility of its opponents and critics, to "seek civil condemnation."

"The propaganda power of the State apparatus, which is enormous in the case of Bukele, distracts you, occupies you and worries you because you have to dedicate resources to legal assistance to know what you can do, how you have to defend yourself to find out if indeed there are investigations by the Attorney General’s Office, if the office is manipulating something or etc.,” Silva said.

On Sept. 14, on El Salvador's independence day, Bukele called all his political opponents "adversaries" in his message to the nation, as published by ElSalvador.com.

From June 1, 2019 to Sept. 10, 2020, the Association of Journalists of El Salvador (APES), recorded 87 complaints from journalists, principally for restrictions on journalism, digital attacks and blockades of access to public information, stigmatizing statements and digital harassment, according to what Angélica Cárcamo, president of APES, told LJR.

In its last alert on Sept. 26, published on Twitter, the organization joined the international community in demanding that the Bukele government stop its attacks on the press, because these “represent a boycott of journalism and a setback for the democracy of the country.”

The positions of IAIP commissioners must be chosen by the journalists' union and not by the Executive, as they are now, Cárcamo said.

“We are in a scenario in which we are seeing that the Executive is placing people who are more closely related to its interests than to the profile of suitability and independence that corresponds to a commissioner [of the Institute for Access to Public Information]. It is a serious setback because the institute, historically, has been a reference in being that controlling actor when a citizen makes a request for information before an obligated entity, in this case the Executive, and asks them to disclose that information of public interest," Cárcamo said.

For this reason, APES has filed an application for amparo before the Supreme Court of Justice requesting the process to designate a commissioner be declared null, Cárcamo said.

"We are in a true deterioration of freedom of expression in El Salvador, of the free exercise of the journalist's trade," Silva said. However, Silva mentioned, the democratic deterioration is in the entire Central American region, not just in El Salvador, and he also said Bukele follows in the steps of Daniel Ortega and of his authoritarian regime in Nicaragua.

“I think we are [as a country] in a place that we have not been before, a very dangerous place. Well, this is just beginning, Bukele has been [in power] for not even a year. He doesn’t even have a year under his belt and he is also an extremely popular president, extremely popular,” Silva said.

People believe him, Julia Gavarrete, a journalist for Gato Encerrado, told LJR, referring to Bukele's popularity among Salvadorans. "Anything he says is 'true' or is set in stone."

Gavarrete had her computer stolen on July 2, while covering a conference at the Presidential House. 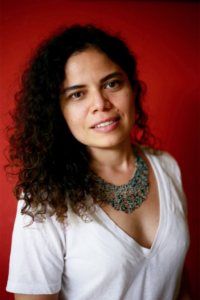 “It was very strange that when I left for three hours, the only three hours that I had left my house that week [during the forty], someone came in and took my work equipment. That is why I preferred not to minimize this incident, especially because the press is being attacked, to make it public, in case it was necessary for this to become a precedent for the future,” Gavarrete said.

This incident, Gavarrete said, made her reflect as a journalist on the need to work and build support networks, of greater journalistic organization and with international foundations, to monitor what is happening with the independent press in El Salvador.

"We must be more organized because we do not know what comes next,” she said. “So we need to be able to respond to the attacks.”

This story was originally written in Spanish and was translated by Teresa Mioli.