The media’s portrayal of women politicians is perpetuating gender stereotypes and is 'feeding into an already sexist culture,' said scholars from around the globe during a research breakfast seminar at the International Symposium of Online Journalism (ISOJ). They highlighted that the way tradicional journalism covers politics also affects how women consume news and engage in those subjects.

"When media outlets treat women politicians as women first and politicians second, they are feeding into an already sexist culture where many voters believe that men make better politicians than women," said Dustin Harp, associate professor and director of Women’s & Gender Studies Program of the University of Texas at Arlington during the seminar, "Gender, media and politics in the digital age" on July 23, as apart of ISOJ’s first-ever online-only conference. 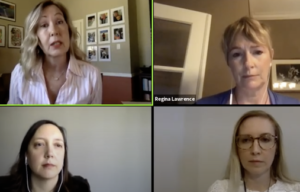 Harp said the media perpetuates these gender stereotypes when they assess women politicians using gendered language or focusing on their familial and home status, their marital status, their appearance, the way they dress or the pitch of their voice. Highlighting these attributes, which are often associated with women politicians and not their male counterparts, she said, is “neglecting to place her politics, record and platform on the forefront. It's bad reporting and it's bad for the world."

Harp exemplified this with a recent story published by The New York Times Magazine that, she argued, used the "trifecta of fashion, food and family" to present a woman in politics.

"This type of reporting about a woman, in isolation, is not a problem, but within a context of how male politicians are written about, and the persistence and pervasiveness of these gender stereotypes, makes it a problem," she summarized.

Harp said people have ideas of what it means to be a competent politician and those attributes are commonly seen as masculine, like strength, decisiveness, assertiveness, competitiveness and ambition. While feminine qualities are traditionally associated with the private sphere, home and family.

Considering how this coverage affects how women engage in politics, professor Ingrid Bachmann, of the Pontificia Universidad Católica de Chile, started researching why there are less women politicians, despite some advances in female representation. She decided to assess if there is a short supply of female candidates, in comparison to men.

"There are some researches saying that there are political ambition gaps between women and men, but in my research, at least in Chile, women reported do be more willing to consider running for office than men," she said.

But Bachmann’s study found that women in general had less knowledge about politics and lacked the basic resources to engage in politics as a candidate, a voter and a citizen. She attributes this partially to the fact that women read less news than their male counterparts.

"This has been found in countries as different as Germany, Taiwan, the US, Chile. Men are more interested and engaged in news than women. Women actually say they avoid news. This suggests that the news industry is not serving women well," she said.

On the other hand, Bachmann's research showed that 84 percent of women were consuming news daily via private messaging apps, like Whatsapp. Not only were they reading about politics, but they were engaging in discussions with colleagues and friends on these apps. Women told her that they preferred using WhatsApp to talk about politics for its privacy, arguing that on Twitter and Facebook there was too much desinformation and aggressiveness. "I think we should pay attention to what women are sharing on Whatsapp... because it's a space for digital media that we haven't considered much," Bachmann concludes.

Scholars also talked about how women politicians are using social media to change the narrative and using gender stereotypes as a campaign strategies. Regina Lawrence, professor and director of Agora Journalism Center of the University of Oregon, explained that the standard theory for political campaigns was that female candidates should try to downplay their femininity and the fact that they are women. This was done in order not to remind voters of the stereotypes that women are good at caring, but not good at leadership.

Lawrence states, however, that this idea is changing, and that, for some candidates and constituencies, reminding voters that the candidate is a woman and supposedly good at caring could be advantageous. She also believes that social media enables women to control part of the narrative and present themselves as a leader and caregiver, sharing professional achievements and intimate moments of their life on the internet.

"It is possible that all of this intimate and personalizing messaging online could be problematic, because it intensifies the double-bind for female candidates, but it could also be advantageous. Some women candidates are doing this very skillfully, blending and balancing personal content and decisive leadership messages," she pointed out.

Urszula Pruchniewska, assistant professor of Communication Studies at Kutztown University, is researching how representative Alexandria Ocasio-Cortez is using social media to change the narrative about women in politics. Pruchniewska argues that Ocasio-Cortez is changing the concept of what a politician should look like and is helping to demystify the elite political process, by sharing videos from inside Congress.

By using live videos, Pruchniewska affirms, Ocasio-Cortez is showing that a woman can speak her mind and have interesting things to say, even without much previous preparation.

"Ocasio-Cortez shares content of her daily low key activities from home, which has the effect of almost like having a girls night with your fun, smart friend, which is a particular draw for young women. This helps her to come across as really authentic, build relationships with her audiences and, at the same time, share political messages," Pruchniewska said.

At the end of the panel, the scholars gave some ideas of how the media could improve their coverage about women in politics. To the reporters, Lawrence suggested looking up guides online that help to avoid sexist language and common stereotypes when covering women. She also recommended that newsrooms should have tools to monitor the diversity of their sources, including the possibility of a reporter doing a source audit of their own work.

The panelists stressed the need for more diverse newsrooms and leaders, but Lawrence remembered that this may not be enough to change the coverage, because journalistic norms and newsroom culture can prevail.

"There's been some good research to suggest that just because women are reporting a political story doesn't necessarily mean that they will cover it differently, because the power of the norms can be so strong, the habit, the patterns, the typical way of covering the stories can persist. So we need to shake up our thinking and be more thoughtful of how we cover politics," she stressed.