A remarkable journalism innovator who has managed to juggle platforms, including print, broadcast and digital, while maintaining the highest quality of investigative journalism — this is how Chilean journalist Daniel Matamala was described in the official announcement of the 2022 Maria Moors Cabot Awards. The awards will be given by the Columbia University Graduate School of Journalism in New York during a ceremony on Oct. 11.

Matamala was honored alongside Mexican freelance journalist and co-founder of Reporteras en Guardia, Laura Castellanos; Peruvian-American journalist and co-creator of the podcast Radio Ambulante, Daniel Alarcón; and British correspondent in Mexico, Ioan Grillo. The Cabot Awards are the oldest international journalism awards and honor journalists and news organizations for career excellence as well as coverage of the Western Hemisphere that fosters inter-American understanding.

Despite being a multifaceted journalist, Matamala, who is currently an anchor at Chilevisión, has a predilection for the audiovisual world.  "Television is the medium to which I have dedicated most of my days during my 20-year career, so it has a special place in my heart. Thanks to television I have been able to get to know multiple realities, from reporting on police on the night shift, to covering the war in Ukraine or leading the coverage of major news events, so I owe it a lot," Matamala told LatAm Journalism Review (LJR). 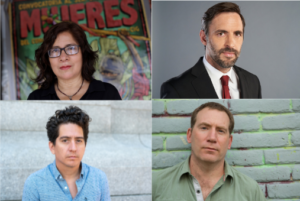 The Chilean journalist began his career at Canal 13 and worked for many years at CNN Chile. He has also published eight books, his most recent entitled Distancia social [Social distance], and is a columnist for the Chilean newspaper La Tercera. For Matamala, journalistic platforms are increasingly mixed and are sometimes indistinguishable. Especially with the advent of social media. "A very challenging aspect of this new media environment is the power it gives people to decide what goes viral and what does not. It matters less and less what we in the traditional press deem as 'important.' It used to be that the front page of a newspaper was decided by an editor. Now the equivalent of the front page (the most viewed and shared on social media) is collaborative work. This is a challenge and a humbling experience for us professional journalists," Matamala said.

For more than 20 years, Matamala has covered political, economic, social and even sports issues. Matamala has fulfilled his journalistic role of holding power accountable, especially political and economic power. His books, as well as many of his feature stories and opinion columns, focus on exposing the various ways in which economic power captures the State for its own ends.

"I think it is also very relevant to evaluate this economic elite using its own yardsticks: capitalism, free competition, free market, meritocracy. That’s their public discourse. But when we scratch the surface and investigate more in depth, we see that many times members of the elite do the opposite: they use their power to circumvent free competition, hinder the free market and distribute the positions of power among the best connected, not among the most deserving," the Chilean journalist said.

Former Chilean President Sebastián Piñera assured, shortly before the social outburst in 2019, that Chile was "a true oasis" within a "convulsed Latin America" in political matters. However, this phrase quickly became a mirage due to the wave of violence and mass demonstrations that have brought changes in Chile's history as a nation: there is a constitutional reform underway and the world's youngest incumbent ruler was elected.

These situations have affected the media and journalism. This year, Chile fell to 82nd place in the world press freedom ranking of Reporters Without Borders (RSF). According to the organization's web page, although freedom of the press is guaranteed in the Chilean Constitution and legal system, it is not always respected in practice. Investigative journalism in that country is losing ground and attacks on journalists are multiplying.

During the 2019 demonstrations there were attacks on television channels and journalist Francisca Sandoval was murdered while covering the Labor Day event on May 1.

"Although Chile is a democratic country and there is formal respect for freedom of the press, public confidence in the media has fallen in recent years, in line with the collapse of confidence in other institutions," Matamala told LJR. "A relevant problem is that the public perceives the traditional media as part of power, rather than a check or a watchdog of it. A significant part of the main TV channels and newspapers are owned by large economic groups, which concentrate important interests in areas such as mining, banking and commerce, and which in several cases have a clear identification with an ideological sector. This limits the independence of the press and tinges journalistic work with distrust", the journalist said.

According to RSF, most of the media in Chile belong to the same economic groups and the Chilean population is increasingly demanding a greater pluralism of information. This in turn is driving the development of alternative media, which still lack professionalism and stable sources of financing.

What a Maria Moors Cabot award means to him

Matamala won the Maria Moors Cabot 2022 Award for his journalistic rigor and innovative approach. Before him, only 10 Chilean journalists had received this award. The last two to receive it were Patricia Verdugo, in 1993, and Mónica González, in 2001.

"Both journalists played an outstanding role in the struggle to tell the truth during the dictatorship in Chile. They put their careers and their lives in danger to tell the truth. So, to add me to that list is an undeserved honor, because I don't have nearly the talent or the career path of Monica or Patricia. That is why I say that journalism is also done 'on the shoulders of giants,' recognizing the path opened by brave women and men like them," Matamala said.

Matamala studied journalism at the Pontificia Universidad Católica of Chile. However, between 2011 and 2012 he completed a Master of Arts at Columbia University. So, this recognition comes directly from his alma mater.

"More than an award, I see it as a recognition for so many journalists who do their work, often anonymously, to keep the journalism flag flying high, at the service of citizens, in Chile. It is my turn to have a more visible role, but journalism is always about teamwork and building something together, in which one picks up the baton where another left it."