A whatsapp bot to help victims, an app to listen to World Cup soccer matches, content recommendation modules powered by artificial intelligence, a website for immigrants in the United States and a software to create scrolly-telling formats are some of the digital product prototypes that emerged from the first cohort of the News Product Design Sprint program.

The Meta Journalism Project and the Craig Newmark Graduate School of Journalism at CUNY  teamed up to bring to life this program that consisted of free online training where 12 Latin American newsrooms created prototype news products guided by expert coaches, during the second quarter of this year. The final session of the program was held at the end of July.

Product creation in the media is based on responding to a clear need of the audience and, based on that, devising effective solutions. Agustina Gewerc, journalist and product manager of the Argentine news outlet Cenital, explains in her blog that working in the product area of a media company comes from "the intersection between content, that is, traditional journalism, the audience (readers) and the business (the money that pays for our salaries)."

In the case of this program, Franco Piccato, Manager of Strategic Media Partnerships for the Southern Cone Meta Journalism Project, explained to LatAm Journalism Review (LJR) that the participating teams focused "on testing hypotheses through simple prototypes, creating iterations of them based on audience testing and making data-driven decisions."

In addition, the global sessions were provided with simultaneous translation into Spanish, Portuguese and English, so that teams and instructors could always interact in their native languages.

Piccato said that "it was inspiring to participate in the program design and the entire learning process over 12 weeks. In the final session, teams showcased an iteration of their prototypes, and were challenged to align their projects with sustainability strategies. Participants presented unique and innovative ideas, projects with great potential to attract engaged audiences or communities, and powerful initiatives focused on revenue generation."

This first edition of the program was attended by renowned media teams such as Grupo Semana from Colombia, RPP Noticias from Peru, Grupo Bandeirantes from Brazil, Grupo AM from Mexico, as well as independent journalistic initiatives such as Reportar Sin Miedo from Honduras and Chequeado from Argentina. 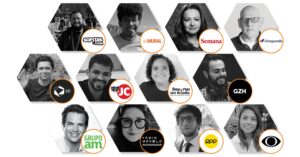 The participants consulted for this article said that during the program, emphasis was placed on the analysis of the audiences of each of the participating newsrooms and teams sought to achieve short-term sustainability with their products.

Reportar Sin Miedo, a Honduran media outlet created in 2020 and focused on diversity populations (sexual, ethnic and cultural), was the only participating team from Central America. "During the program we created a prototype through WhatsApp with artificial intelligence that gives immediate response to complaints. Every day we receive complaints of all kinds on our social networks. People trust our media. We are focused on young people ignored by the system who find  a safe space in our platform," Dunia Orellana, director of Reportar Sin Miedo, told LJR.

The tool will be launched and will start on WhatsApp in mid-August, but is expected to expand to Facebook and Instagram in the future. Reportar Sin Miedo has, for the past two years, publishing stories about hate crimes, migration or natural disasters in Honduras. They produce content on different platforms with a reach of more than 100,000 thousand users per month. It is a small team of 10 people, all under 30 years old.

"The idea of the whatsapp bot was born out of necessity. We were inspired by other civil society organizations that offer these help services," Orellana said. "Honduras is a country of almost 9 million people and, of those, approximately 4 million have cell phones but not all of them have internet. Anyway, we decided to make Whatsapp the center of our tool. Also because our audience is very young.”.

Not all journalistic product prototypes must be based on technology or innovation. A product can also be focused only on satisfying a specific user need. This can include the creation of newsletters, podcasts, websites or simply social media content.

This was the case of the participating team from the Mexican digital news outlet Sopitas, comprised by Aaron Rubio Manuel, Alejandro G. Vargas, Iván González Hernández and Sebastián Gutiérrez. During the program, they conducted a market analysis to understand the needs of their audience. Then, they created a mirror website with topics of interest for Mexicans living in the United States, especially for undocumented people or those who have been out of the country for many years.

"During the program we contemplated different methodologies and user experience techniques. Our prototype was the result of the interest we have from sopita.com to expand to other places. I am very happy, I learned a lot," Sopitas journalist Aaron Rubio Manuel told LJR.

Germán Frassa, an expert in digital journalistic products and a trainer for this program, highlighted all the prototypes presented, but emphasized the value of those that changed course along the way. "If I had to highlight some of them, I would keep the teams that arrived with a preconceived idea, those that somehow were ‘in love with a solution’ but had the agility and professionalism to pivot when the application of the concepts shared in the program made them realize they were not adequately meeting the needs of their users," Frassa told LJR.

The situation in Latin America

The media in Latin America have lost impact and social influence. Politicians such as Nayib Bukele, in El Salvador, or Gabriel Boric, in Chile, have shown that it is possible to come to power without the support of mass media.  In addition, the new independent media face the challenge of finding a sustainable business model without affecting their credibility. 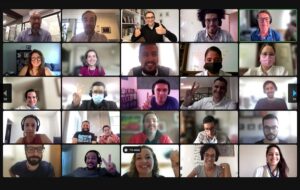 The final session of the program was held at the end of July. The global sessions were provided with simultaneous translation into Spanish, Portuguese and English. (Photo: Craig Newmark Graduate School of Journalism at CUNY)

"In Mexico, and basically in all of Latin America, the media get by with few resources. These types of programs like the News Product Design Sprint make us aware that sometimes we need a bigger team and that we need to collaborate with each other. It also helps us understand the importance of the experimentation phase for launching of a product, because one thing is what you plan and another is what turns out," Rubio Manuel said.

As published in the official presentation of the program, Meta and the CUNY Graduate School of Journalism seek to "offer newsrooms the tools they need to face the challenges and opportunities of the digital era." This in light of the fact that in Latin America it is uncommon to see fully functional product departments that can generate new sources of revenue.

"It takes two things to make innovative products: the audacity to detect opportunities and the discipline to execute ideas. Latin America lives in a state of permanent political, social and cultural ferment, for better and for worse. A good aspect of this ferment is that it predisposes us favorably to audacity. But that effervescence also has a dark side, which affects discipline," Frassa explained. He also highlighted the problem in Latin America regarding the role of "product manager," a key position in any successful digital native venture that is almost non-existent in the region.

"I think the News Sprint Program at CUNY and Meta made it clear that, of the three "Ps" formulated by Marty Cagan (product, people and process), the first two are clearly present: there are people in the media industry who are passionate about innovating and, with the right support, can create products of value," Frassa said.  "The unfinished business is for their organizations to embrace change, design roles and processes to underpin the transformation and scale it so it becomes an everyday occurrence."