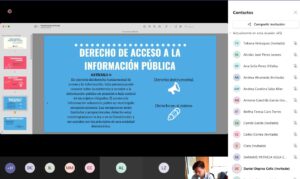 Training sessions took place at the beginning of April and Daniel Ospina, transparency researcher at the organization Dejusticia, gave a keynote. (Screenshot)

Access to public information is a right that is not always respected by those who are in positions of power. Prolonged response times and ignorance about the legal resources to access public data are common in Latin America, especially in remote areas, far from the great cities.

That's why the Contrapedia Caribe team in Colombia decided to carry out a series of free and virtual training courses, aimed at journalism students from Cartagena and Barranquilla, to provide them with tools for the Constitution of Colombia and the Law of Access to Information. The event was called ‘Your right to know: journalism and public information training sessions.’

“Students are our future journalists and we wanted to emphasize starting from the classroom how important is access to public information (especially in difficult times like the pandemic). The idea is to plant a seed. To try to promote among them the use of access to public information and its practice based on constitutional mechanisms,” Tatiana Velásquez, reporter and co-founder of La Contrapedia Caribe, told Latam Journalism Review (LJR).

Contratopedia Caribe emerged, just three years ago, as a digital platform specialized in keeping track of public procurement in the Colombian Caribbean (which includes urban centers and areas of tourist attraction such as Barranquilla, Cartagena, Santa Marta, Sincelejo, Riohacha, among others), so that citizens know how public officials make use of their taxes.

“Contratopedia was co-founded by two journalists: Antonio Canchila and me. Then María Alejandra Romero joined. We are in a process of institutional development that began in August 2021 with a grant from the International Center for Journalists (ICFJ), to try to strengthen the business aspect of the project. We have also received support from the Gabo Foundation. We currently have additional support from ICFJ to carry out these sessions”, Velásquez said.

Colombia has had a law on Transparency and the Right of Access to National Public Information since 2014. It covers the regulations for the protection of this fundamental right and establishes the obligations regarding the publication of data and response to requests for information.

However, despite the fact that eight years have passed since the enactment of this law, Colombia has suffered serious setbacks in terms of transparency due to decisions made by the national government and public officials that have hindered access to information, according to specialized non-governmental organizations.

The Foundation for Freedom of the Press in Colombia (FLIP) has denounced that "a 'culture of secrecy,' predominant in Colombian state agencies, found fertile ground in the hyper-digitalized world." This is because in 2020, due to the COVID-19 pandemic and the transition to remote work, the Colombian government doubled the response times for public officials to deliver information. It went from 10 business days to 20.

“Today, the circumstances that justified this measure have disappeared. However, the government has struggled to uphold its decree and has not restored the guarantee of this right within reasonable timeframes. A proposal was presented that reverses this expansion, Bill 448 in 2020. However, the Senate has not yet made a call for the last debate, and some congressmen warn of a lack of will to do so,” FLIP published on its website.

In addition to delays, FLIP has also denounced that the agencies usually respond to the requests by saying that the documents are in 'reserve' or that they are not authorized to release the information. So, journalistic work is hindered.

The Contratopedia team assures that these impediments are true and, in most cases, the stipulated times for the delivery of data are not respected. “We’ve had that experience. We requested some data on some public officials’ contracts in Cartagena and they answered us 10 months later. Also, when we requested some contracts on COVID-19, they took 4 months, and so there are many examples of excessive time," Velásquez said. "That's why we decided to carry out training on this topic, because we realized that the right to access public information in Colombia is very vulnerable," the journalist said.

Ketty Roqueme, a journalism student at the Technological University of Bolívar in Cartagena, found out about Contratopedia's 'Your right to know' training sessions on social media and did not hesitate to sign up.

“I think this space of the Contratopedia has been super valuable. They have emphasized to us how the law of transparency and access to information is a great journalistic ally. Most of the attendees were students who are starting their education and it never hurts to touch on these issues,” Roqueme told LJR.

The training sessions took place at the beginning of April and included a presentation by Daniel Ospina, researcher of technology and transparency of the organization Dejusticia; Johamna Lalinde, professor and researcher of the Social Communication program at Universidad del Norte; Jineth Prieto, investigative journalist for La Silla Vacía and Daniel Morelo, computer engineer and digital designer.

“The speakers emphasized, over and over, the importance of presenting the audience with a transparent article and that resonated with me after the sessions. I liked that he went beyond. He also explained how to follow up on requests for information and explained how to get data on the web and give it a different approach through the crossing of variables,” Roqueme said.

As part of the training, Contratopedia also designed a digital toolkit on access to public information, data visualization and basic tools to exercise your right to know in Colombia, that can be used free-of-charge.

The Contratopedia team says the access to information law is underused in journalism in the Caribbean region. For this reason, they try to ensure that, from a young age, journalists include request mechanisms based on the Constitution in their daily work.

“It is important to have this access route to public information not only because as journalists we must have a plurality of sources, but also because we are obliged to be able to provide the audience with truthful content, content based on real events and hard data,” she said.