Juan Carlos Muñiz Hernández combined his work as a crime reporter for the Testigo Minero news outlet with driving a taxi in the city of Fresnillo, in the state of Zacatecas in northern Mexico. Muñiz reported while driving a taxi, day and night, cases of violence, crime or accidents that he encountered on his way.

Muñiz was also known as “Rigoberto” and as “El TX” by the people of Fresnillo, in reference to his occupation as a taxi driver. The journalist also collaborated frequently with local radio stations such as B-15 and Radio Zacatecas 97.9 FM.

Muñiz's was assassinated on Friday, March 4. Some individuals intercepted the journalist and shot him at close range while he was driving his vehicle in the Los Olivos neighborhood, according to local media reports. Muñiz became the seventh journalist killed so far in Mexico in 2022. The 36-year-old journalist was married. He was the father of four children: two girls, 14 and 12; a 2-year old and a 10-month old baby. 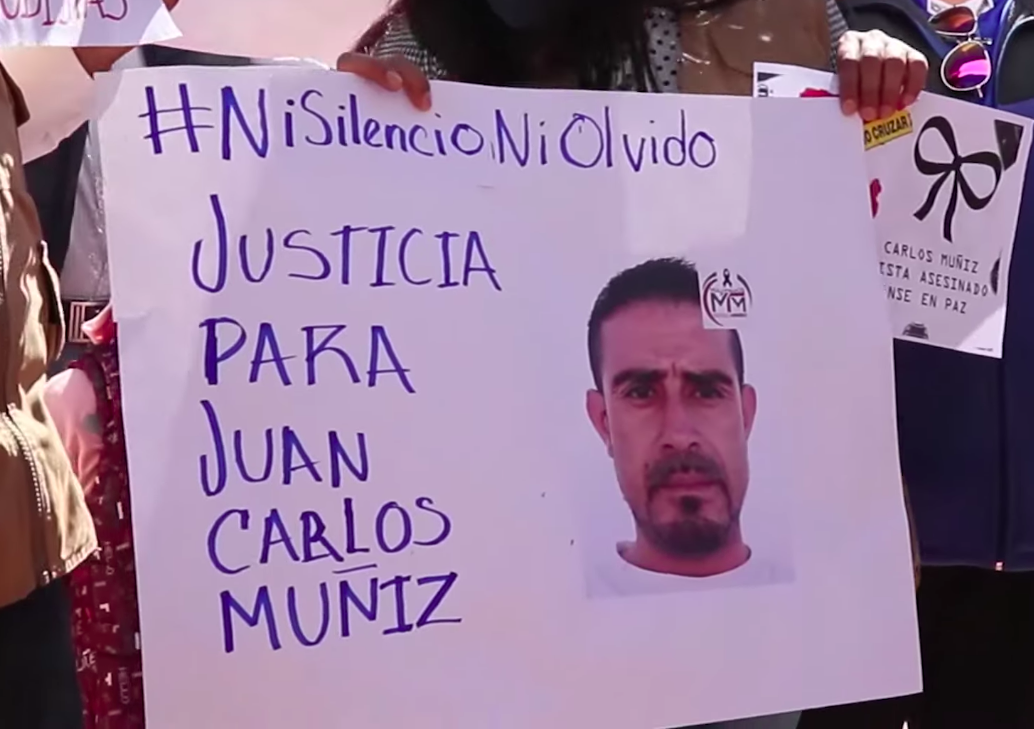 Individuals intercepted Juan Carlos Muñiz and shot him while he was driving his vehicle in Fresnillo, Zacatecas. (Photo: Screenshot of a B-15 Noticias streaming)

Social organizations and journalists associations, both in Mexico and internationally, condemned Muñiz's murder and demanded justice from Mexican authorities, while these, until Monday, March 7, had not said much about it.

The Zacatecas Prosecutor's Office issued a statement hours after the murder. It announced it had started an investigation folder based on the investigation protocol for crimes against freedom of expression and that it had contacted the Mechanism for the Protection of Human Rights Defenders and Journalists of the Federal Ministry of the Interior.

The Undersecretary of Public Security of Mexico, Ricardo Mejía Berdeja, briefly mentioned the case during the morning conference of President Andrés Manuel López Obrador on March 7. Mejía said, without giving further details, that those responsible for the murder had already been identified and that an order for their arrest would be issued.

Meanwhile, the organization Reporters Without Borders condemned the murder of Muñiz through its social networks and demanded that the Zacatecas Prosecutor's Office investigate the case taking into consideration the victim’s journalistic work, as well as provide his relatives with the necessary protection measures.

Article 19 Mexico announced it was already documenting the murder of Muñiz and joined the demand to carry out an exhaustive investigation that has as its main line the work of the victim.

The Inter-American Press Association (IAPA) also condemned the events and called for an end to the violence faced by journalists in Mexico.

"It is time that the 'enough is enough' brandished by journalists, organizations and the media, outraged at the lack of justice for the murders against journalists, ceases to be a slogan and becomes an effective action by the government to stop the violence," Carlos Jornet said, president of the IAPA's Committee on Freedom of the Press and Information, in a statement published on March 7. "Exemplary punishments are urgently needed, so it is clear to the murderers that their crimes will not go unpunished."

The Human Rights Commission of the State of Zacatecas (CDHEZ) lamented and condemned the murder of Muñiz and called for the protection of life, personal integrity, security and freedom of expression to be guaranteed to journalists so that they can carry out their informative work.

“(The CDHEZ) reiterates the call to state authorities to immediately implement a Mechanism for the Protection of Journalists, establishing security guarantees and preventive measures and urgent protection measures for members of the press,” María de la Luz Domínguez, president of the organization, said.

Likewise, the Federation of Associations of Journalists of Spain (FAPE) and the International Federation of Journalists (FIP) condemned the murder of the journalist from Zacatecas and demanded an urgent investigation within the framework of the protocol for crimes against freedom of expression.

“Faced with this alarming scenario, the FAPE, the IFJ and the SNRP (National Union of Newspaper Editors of Mexico) demand that urgent measures be taken to protect journalists throughout Mexican and that those responsible be found and punished. […] of the murders that still remain unpunished,” the organizations said in a statement. 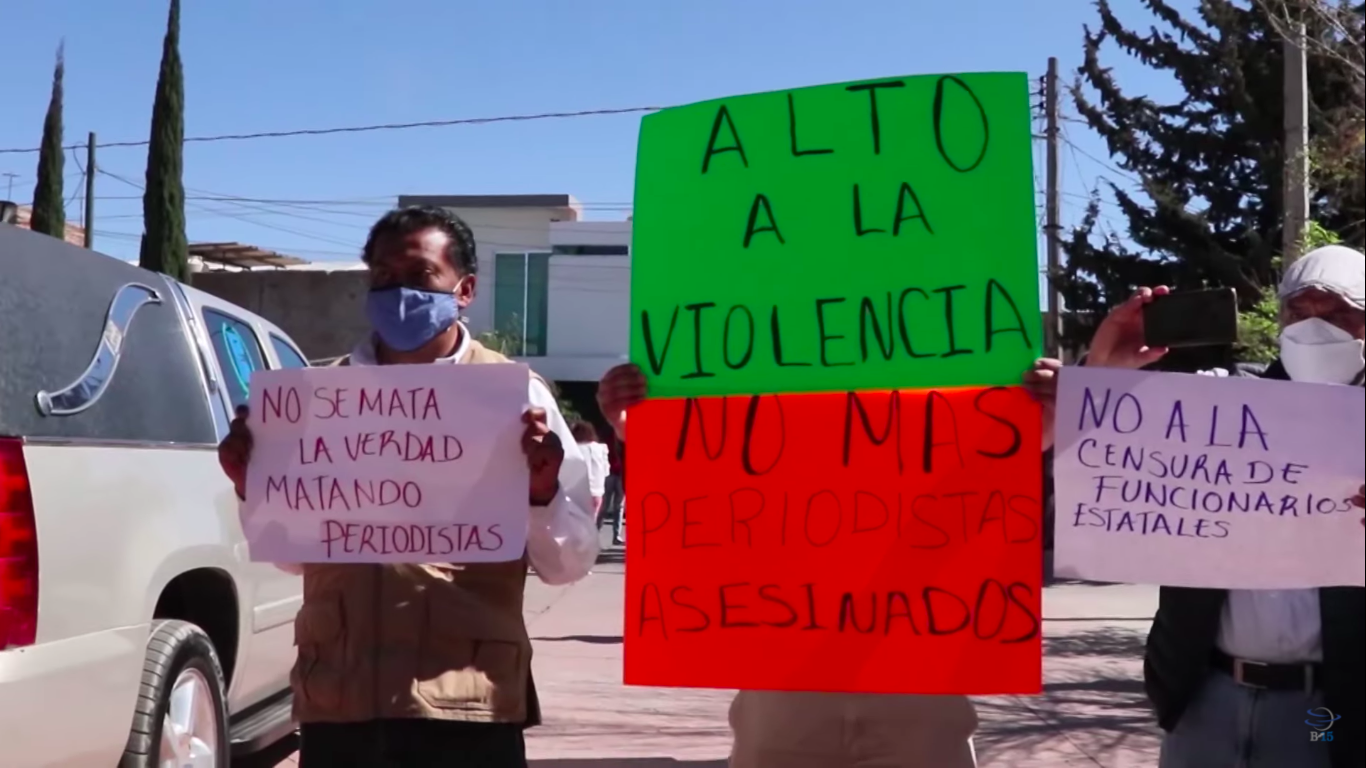 Colleagues from Mexico and abroad claimed for justice for Muñiz's death. (Photo: Screenshot of a B-15 Noticias streaming)

A wake for Juan Carlos Muñiz was held over the weekend in Fresnillo and a funeral mass for him took place on Sunday. The mass was attended by family, friends and colleagues from the Zacatecas media outlet, as well as members of the Fresnillo Fire Department, to which Muñiz also contributed.

Journalists present showed banners with the slogans "Neither silence nor forgetfulness", "Justice for Juan Carlos Muñiz", "Stop the violence, no more murdered journalists", "We are the press, do not shoot" and "You do not kill the truth by killing journalists”, among others, according to La Jornada.

Colleagues present at Muñiz's funeral said the murder has already had a direct impact on freedom of expression in Zacatecas, since since the death of colleague. Some media outlets have suspended coverage of violent events in the state and do not rule out that this could produce a lack of information due to the risk involved in practicing journalism, reported station B-15.

In the first two months of 2022, six journalists lost their lives violently in Mexico. The most recent before Muñiz was Jorge Camero Zazueta, who was assassinated on Feb. 24 in the state of Sonora.