Journalists suffer threats with weapons and theft of vehicles and equipment during riot over drug lord's arrest in Culiacan, Mexico

Journalist José Manuel Salas learned early Thurs. morning, Jan. 5, that federal forces were carrying out operations near his home in the northern area of Culiacán, capital of Mexico's Sinaloa state.

Salas learned that an organized crime group was stealing cars to set them on fire and use them to block access on roads and to keep authorities from making inroads in the area. From his house he could see plumes of smoke from the burning of these vehicles on Mexico International Highway 15, which connects the center of the country with the US border and which is just a few blocks from his home.

Salas, who is founder and content director of the digital native news outlet Link Sinaloa, walked to one of the blockade points around 9:30 a.m. and made a Facebook Live broadcast. The video was abruptly interrupted when a subject aboard a motorcycle approached Salas and some civilians who were there, and asked him to stop recording.

In the live broadcast that Salas did, a man can be seen on board a motorcycle approaching to take away his phone. (Photo: Facebook)

"He told me 'I have an order not to allow anyone to record anything or take pictures. Give me your phones.' When he saw that I wasn’t paying much attention to him, he took out his pistol, he drew it and placed it on my chest," Salas told LatAm Journalism Review (LJR) hours after the incident. "Then he started his motorcycle and went back to where a moving truck was burning. I saw him grab the phones and throw them in the cabin, which was on fire."

After the incident, Salas returned home and decided not to continue covering the violent events. He later learned that the blockades and burned cars he witnessed were part of organized crime's reaction to the arrest of Ovidio Guzmán López, son of former Sinaloa Cartel leader Joaquín "El Chapo" Guzmán.

Members of the criminal organization set up at least 19 blockades, including access points to the city. In addition, they shot at strategic installations such as Culiacan's international airport and Military Base 10, according to Luis Cresencio Sandoval, the head of the National Defense Department (SEDENA, by its Spanish acronym), as he reported hours later.

Salas was just one of several media professionals who were affected by the wave of violence brought on by the arrest of Guzmán López. Civil organizations have registered more than a dozen attacks against the media and obstacles to covering the unrest. The aggressions include theft of vehicles, theft of equipment, threats and intimidation with high caliber weapons.

At least six journalists were threatened, and some of them had guns pointed at them while doing their work, as reported by the organization Red Rompe el Miedo, which works to defend the right to information and the protection of journalists in Mexico.

The organization added that at least four vehicles belonging to press workers were robbed by armed men. One of them was set on fire.

Gilberto Meza, a journalist with the Quadratín news agency, was one of the journalists whose vehicle was stolen. He and two colleagues were on board a van with the intention of covering the blockades when a group of people on motorcycles and with guns in hands asked them for the key to their vehicle. The journalists obeyed and the aggressors left.

"I’d never felt fear before. I’ve been covering crime news for more than 15 years and the truth is I had never felt this uncertainty, this fear, this moment of insecurity," Meza said in an interview with news chain N+Media. "We walked about three kilometers [two miles] after being robbed and we arrived at a place where we felt safe and we took shelter, but we kept seeing trucks with armed men passing by. The truth is that we felt a lot of insecurity, a lot of uncertainty and we were not safe until we arrived at a colleague’s home. We’ve been sheltered there ever since."

Gilberto Meza and two colleagues walked several kilometers after the van in which they were covering the violence was taken by armed men. (Photo: Facebook)

Another journalist who was robbed of his car was Marcos Vizcarra, of the digital news outlet Revista Espejo. Vizcarra, one of the winners of the 2021 National Journalism Award in Mexico, was stopped by armed youths while traveling in his vehicle. The assailants seized his vehicle and took his computer and cell phone, according to the newspaper Noroeste.

"I’m inside a hotel in the north part of the city of Culiacán. About three hours ago they took my car and I was able to take shelter here. Armed men entered the hotel named Two and are threatening customers to hand over their car keys. There is shouting and crying," Vizcarra posted on his Twitter account.

The Committee to Protect Journalists (CPJ) went on alert in the early hours of Thursday following initial reports of danger to the media. The organization condemned the violence in Sinaloa and said it had reports of at least one journalist who had been threatened at gunpoint and robbed of his car by cartel members.

“CPJ has monitoring the situation in #Culiacán, the capital of the northern Mexican state of Sinaloa, and urges authorities to guarantee the safety of reporters on the ground,” the organization stated on Twitter.

Jan-Albert Hootsen, CPJ's representative in Mexico, said that as of Thursday afternoon there were no reports that any journalists had been physically injured.

Staying at home, the best option

Upon learning of the violence that some journalists were experiencing, Red Rompe el Miedo activated the monitoring of the situation and urged press professionals to report to the organization Article 19 any case of aggression against freedom of expression.

The organization urged to avoid, as much as possible, going out to cover the situation in the field. But for those journalists who were required to do so, it recommended organizing a monitoring plan with their newsrooms and to be in constant communication with someone they trust. It also advised extreme caution when taking photographs.

However, journalists in Culiacán have long learned that, in the face of drug violence, it is better to keep a safe distance and put their safety ahead of their journalistic work.

"Here the instructions were the same, do not go out, because these people don't respect anything or anyone," Salas told LJR. Before founding Link Sinaloa, he worked for 16 years as a reporter for the newspaper Noroeste. "With a gun, any boy - because [the hitmen] are young - who is on drugs, can have a shot slip out so it's very dangerous.” 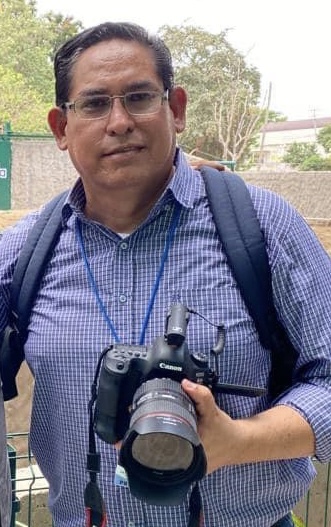 José Manuel Salas chose not to go out to cover the blockades after being threatened with a gun. (Photo: Facebook)

Sinaloa is a state with a history of violence against journalists, both by organized crime and by the authorities themselves. This has caused some news outlets to limit their coverage of violence and insecurity in the state.

Just a few days ago, in the early hours of Jan. 1, a state police officer pulled a gun on journalist Ernesto Martínez, known to his colleagues as "El Pepis," while he was covering a shooting in the south of Culiacán.

"I arrived saying hello as usual and then I took some photos. When I started to take video, the state [agent] started yelling at me not to videotape, so I told him I was working and told him what news outlet I belonged to," Martinez said, according to the newspaper Debate. "Then he tried twice to snatch my cell phone, but I moved aside, so this policeman pointed the gun at me. I moved the rifle aside, asking him what was up, and he pointed it at me again."

Martínez, who works for the news outlet Los Noticieristas and has 20 years of experience covering crime, said other agents removed the aggressor, although he continued to verbally attack him. The Governor of the state, Rubén Moya Rocha, said the facts would be investigated, although he questioned the journalist's testimony, saying that his version "was not the absolute truth" and that this would only be ascertained by an investigation.

Martinez filed a complaint with the State Human Rights Commission. Days later, both the Governor and the Secretary of Public Security of Sinaloa offered him a public apology. The latter admitted that his officers have repeatedly committed excessively violent acts.

Sinaloa also has a history of murders of journalists. Last year, journalist Luis Enrique Ramírez was found dead and with signs of beatings, after being reported missing a day earlier. And in 2017, Javier Valdez, founder of the weekly Ríodoce, was murdered. His death has been among the most emblematic of the violence suffered by journalists in Mexico.

"Stop romanticizing the journalism profession, it is not heroic. We have families and many needs. We do it because no one else wants to do it. We do it under precarious conditions because it is poorly paid. It was noticeable in today's coverage in #Culiacán, we couldn't do it, flat out. Just a few videos here and a few photos there. Several colleagues had vehicles and equipment taken from them, or were threatened with a weapon. Others could not even leave their homes. Others were kidnapped for a while. We were all scattered about, we were never able to meet, only through chats," posted on his Twitter account Ríodoce journalist Aarón Ibarra. He was Valdez's colleague and created a monologue in his memory, titled "Javier Valdez: I was a mailman," which premiered last year on the fifth anniversary of his murder.

"The fact is we don't know how to report a war. We learn by doing and that empiricism is turning more violent and precarious. We can't approach the authorities because they are as criminal as organized crime [...]," Ibarra tweeted.