Just 18% of cases of murdered journalists in Latin America and the Caribbean have been reported as resolved: UNESCO

This post has been updated to include information on UNESCO's Observatory of Killed Journalists.

When the murders of journalists are not brought to justice in court, the result is not only injustice for those professionals and their families, but a greater threat to the colleagues they leave behind.

In Latin America and the Caribbean, just 18 percent of cases of murdered journalists, or 41 out of 226 cases condemned by UNESCO between 2006 and 2017, have been reported as resolved by Member States, according to UNESCO. 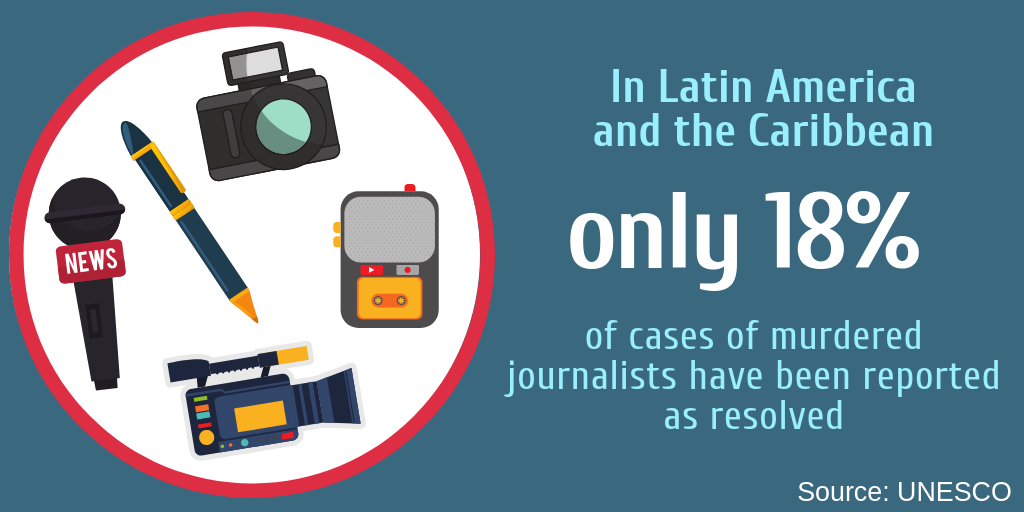 Meanwhile, impunity persists in nine out of ten cases worldwide, according to the organization.

This Nov. 2, UNESCO and press freedom organizations around the globe are calling attention to these statistics and overall impunity in cases of violence against press professionals to mark the International Day to End Impunity for Crimes against Journalists (IDEI).

The United Nations General Assembly established the IDEI in 2013 and urged Member States to prevent violence against press professionals, investigate violence against them and bring those responsible to justice. It also called on States to “promote a safe and enabling environment for journalists to perform their work independently and without undue interference.”

While the international legal framework regarding impunity is stronger than it was five years ago, implementing measures at the national level is still a challenge, according to Audrey Azoulay, director-general of UNESCO. She also pointed to the need to address threats to women journalists, who have experienced increased attacks and harassment, specifically online.

“It is our responsibility to ensure that crimes against journalists do not go unpunished,” Azoulay said. “We must see to it that journalists can work in safe conditions which allow a free and pluralistic press to flourish. Only in such an environment will we be able to create societies which are just, peaceful and truly forward-looking.”

The organization and allies are spreading awareness with the #TruthNeverDies campaign. A special microsite publicizes the stories of journalists who were murdered for their work. In Latin America, they included the cases of Miroslava Breach, who was killed in Mexico in 2017; Paul Rivas, killed in 2018 in Colombia; and Javier Valdez, killed in Mexico in 2017. Readers can access the journalists' stories on the site and share them on social media using the hashtags #TruthNeverDies, #EndImpunity and #Journosafe.

UNESCO also launched the Observatory of Killed Journalists, an searchable online database with information on the judicial status of cases of murdered media professionals. The database contains each killing UNESCO has recorded since 1993, according to organizatoin, and information comes from States where the murder happened.

UNESCO is not the only organization measuring impunity in the killings of journalists to mark the IDEI. 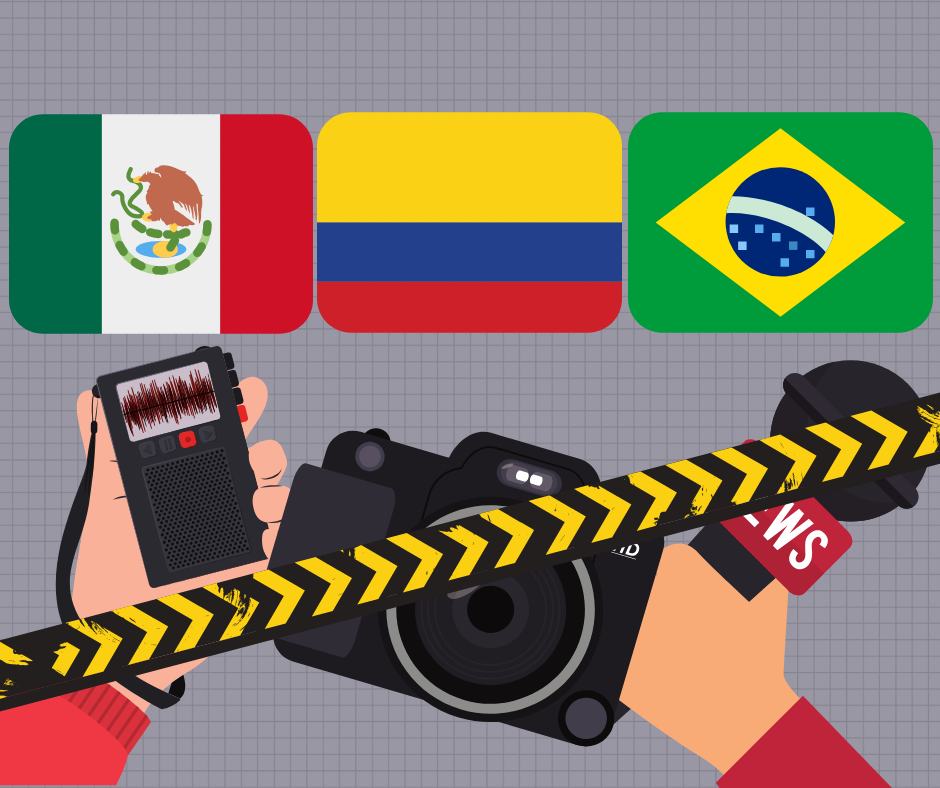 The Committee to Protect Journalists (CPJ) ranks countries according to the rates of impunity that prevail in cases of murdered journalists. In this year’s index, Mexico, Colombia and Brazil are among the 14 countries worldwide that have the highest rates of impunity in cases of murdered journalists. CPJ calculates the number of unsolved cases as a percentage of country population.

It’s important to note that organizations frequently have different statistics for the number of journalists killed and for impunity. This is because each organization has different criteria for determining whether to include a journalist’s death and whether crimes have gone unpunished.  For example, some groups consider a journalist’s death only if they were killed directly because of their work, while others include journalists who died while on the job. Additionally, organizations take different time periods into account when performing calculations.

Press freedom and journalist organizations, as well as individual journalist collectives, are doing much of the legwork to fight impunity.

For example, the Tim Lopes Program from the Brazilian Association of Investigative Journalism (Abraji) investigates the cases of murdered journalists in that country. Launched in late 2017, it has so far investigated two cases: those of threatened radio journalist Jefferson Pureza Lopes, and of Jairo de Sousa, shot while arriving at the radio station where he worked.

With the reporting project “Frontera Cautiva” (Deadly Border), 19 journalists from Ecuador and Colombia are analyzing the abduction, murders and reporting of three colleagues who were killed along the border of the two countries earlier this year. Journalist Javier Ortega, photographer Paúl Rivas and driver Efraín Segarra were abducted on March 26 in Ecuador by the armed group, the Oliver Sinisterra Front, and later killed. 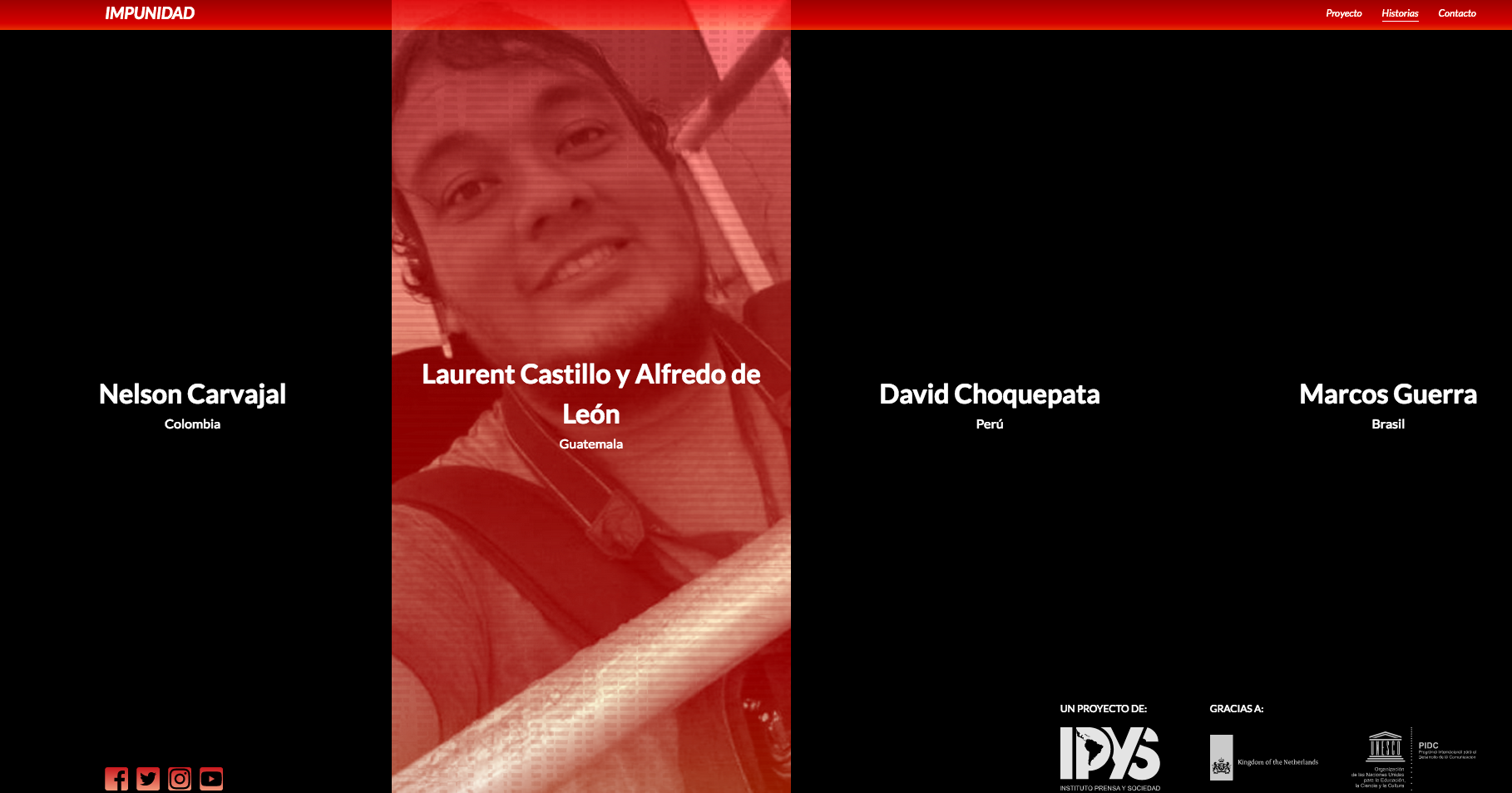 The Press and Society Institute (IPYS) of Peru and UNESCO announced the investigative series “Stories of crimes against journalists,” which looks at the murders of Nelson Carvajal (1998, Colombia), Laurent Castillo and Alfredo de León (2018, Guatemala), David Choquepata (2016, Peru) and Marcos Guerra (2014, Brazil), and the investigations into these cases.

Occasionally, organizations are even involved in bringing these cases to international bodies for resolution. For example, the Inter American Press Association (IAPA) and Robert F. Kennedy Human Rights requested the Inter American Commission on Human Rights submit the 20-year-old case of murdered Colombian journalist Nelson Carvajal Carvajal to the Inter-American Court. In June 2018, that court condemned the Colombian State for the crime.

These are just a few examples of efforts to find justice for press professionals killed for their work.

As part of its efforts to combat impunity, UNESCO published the 2018 Director-General’s Report on the Safety of Journalists and the Danger of Impunity, in which it asks Member States to report on the status of judicial investigations of journalist murders.

Overall, 182 journalists were killed during 2016-2017, a decrease compared to the previous two-year period, according to the report. Yet, it noted that the statistic is still elevated compared to earlier periods and that “there is no reason to conclude that this necessarily marks a sustainable downwards trend.” 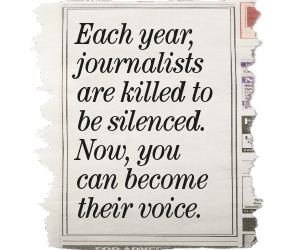 The report also highlighted a rising percentage of women journalists among all press workers murdered, although a vast majority of the overall total are men.

Worldwide, only 11 percent of cases have been resolved. The organization calculates this percentage by looking at the cases condemned by the Director-General between 2006 and 2017.

“Legal impunity for perpetrators is still the norm for most killings of journalists,” according to the report.

A lower percentage of Member States responded to requests for information about judicial follow-up in murder cases of journalists, which it qualified as a step back.

“Since UNESCO’s reporting on the status of judicial procedures is based on information supplied by Member States, a high response rate is essential to provide an accurate picture of judicial follow-up of killings of journalists,” the report stated.

However, 15 Member States –including Brazil, Guatemala, Honduras and Mexico– provided concrete actions they were taking to improve journalist safety, according to UNESCO. Some of the actions included establishing monitoring mechanisms for attacks on journalists (Brazil and Guatemala) and creating an emergency call line for threatened journalists (Guatemala).

“The killing of journalists, the ultimate form of censorship, is just the tip of an iceberg of attacks against journalists, which range from non-lethal physical attacks, kidnapping, illegal detention, threats, harassment off-line and online, to retaliations on family members,” the report read.