Ten years after the access to information law’s approval, Brazil is experiencing ‘stagnation with signs of setback,’ study says

Ten years after the enactment of the Access to Information Law (LAI, for its acronym in Portuguese), an analysis by the organization Transparência Brasil says the quality of the federal government’s response to requests for information made between 2019 and 2021 has gotten worse.

According to the report, the impression that things were deteriorating had already been noted among frequent users of the LAI and was confirmed by the survey.

"Unfortunately, it seems to us that we are in a state of stagnation with signs of setback, especially in the Federal Executive branch – which used to be a positive reference, in general,” Marina Atoji, project and communication manager at Transparência Brasil, told LatAm Journalism Review (LJR).

The study indicated that the years 2019 and 2020 had a high percentage of denials of requests for information by the federal Executive, reaching 9 percent. The number is one of the highest recorded since 2012, the year the law came into force and in which denials were also at 9 percent. In 2013 and 2014, the percentage reached 12 percent. 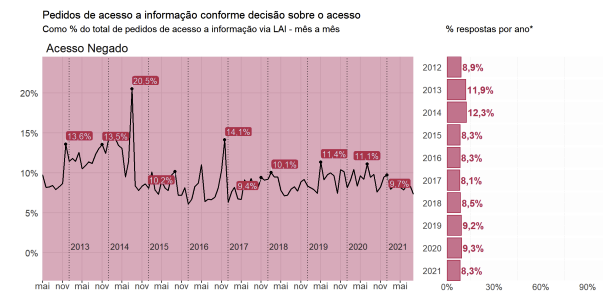 Index of requests for information denied by the federal Executive. (Image: Screenshot of Transparency Brazil report)

The worsening in response, however, is not seen in only one indicator. According to the report, several indices have had a negative performance in recent years. For example, the proportion of partial responses was 7.2 percent in 2021, equaling the worst mark since 2012, recorded in 2016.

"Ideally, it [the denial/partial rate] will decrease over time, and not increase – even if in a low proportion. Especially considering that, over time, the number of requests and the variety of public bodies triggered via the LAI increases," Atoji said.

Another negative point is that the proportion of "Access Granted,” that is, requests characterized as answered by federal agencies, was low, at 77 percent, from 2019 to 2021 – also very close to the lowest rate ever recorded, 76.6 percent in 2013.

Likewise, Atoji points out that another important indicator that shows a worsening in response is the reason for appeals. In 2021, the proportion of appeals made with the justification that the answer was incomplete ("incomplete information") reached 40.5 percent, the highest level in the history of the LAI. On the other hand, the report celebrates "the almost total reduction of appeals triggered by giving answers past the LAI deadline (maximum of 30 days)" – the rate was 0.1 percent in 2021.

Over the ten years of the law’s existence, Atoji stresses that some challenges and obstacles remain, such as the difficulty of implementing the LAI in small municipalities, with less than ten thousand inhabitants, and in the Judiciary and Legislative powers, mainly at the local level. She also emphasizes the lack of sanctions for non-compliance with the law, which discourages effective implementation of the LAI.

As for some of the improvements in this period, Atoji mentioned active transparency, that is, the spontaneous disclosure of information of public interest, without a citizen having to request them. Second, this principle has become widely practiced in the country. According to her, this principle is now widely practiced in the country. Moreover, she mentioned a greater awareness of the public about the right to information. 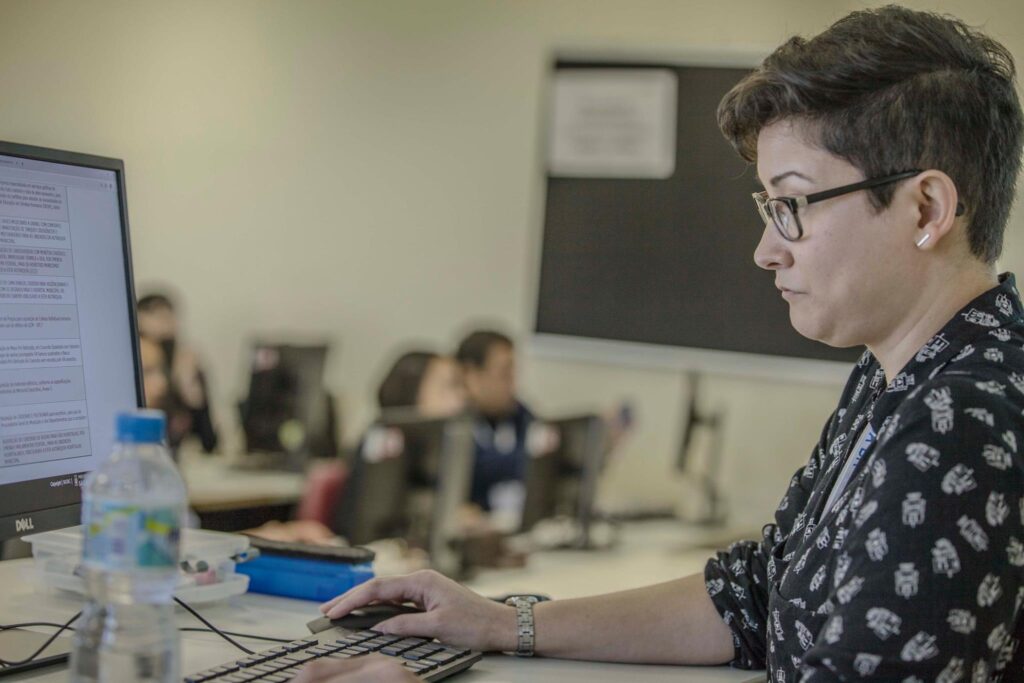 Asked what was the responsibility of President Jair Bolsonaro, who constantly harasses and attacks the press, in this worsening of the response to requests for information, Atoji  said that "the current government's posture has been reflected especially in the high levels of his administration –  which ends up affecting the work of public servants who continue to comply with the LAI.”

She points to the role of the Office of the Comptroller General of the Union (CGU), the body responsible for overseeing the implementation and promotion of the LAI in the federal government, as one of the main reflections of the Bolsonaro government's anti-transparency attitude.

"[The CGU] has been silent in flagrant cases of violation of the legislation (disproportionate impositions of secrecy, for example, or the lack of immediate measures to determine the transparency of the application of the rapporteur's amendments) or applied innovations in the evaluation of resources to favor the restriction of access to information," Atoji said.

LJR contacted the CGU for comment about the Transparency Brazil report, but did not receive a response as of publication time.

During the pandemic, the federal government promoted changes in the publication of COVID-19 numbers, which reduced the quantity and quality of data. This opacity in the numbers was reflected in the survey by Transparência Brasil.

According to the report, the Ministry of Health appears among the federal government agencies that most denied requests for access to information in 2020 and 2021.

"The lack of active transparency that marked the management of the pandemic by the federal government (leading to a greater demand via passive transparency, that is, information requests), added to the concentration of Ministry employees in activities directly related to the mitigation of public health emergencies (weakening the response to information requests) and the adoption of remote work (making it difficult or impossible for servers to access information to provide answers) stand out as factors that can explain the scenario,” the study says.

Atoji explains that these changes have harmed – and still harm – the work of the press. On the one hand, she says that the lack of transparency had a positive impact, because it motivated the creation of a consortium of Brazilian media outlets to put together the numbers, independent of the federal government.

On the other hand, it compromised "access to fundamental information so the public could know the extent of the crisis and the measures taken by the government to contain it,” she said.

"In addition to the attempt to take down data on [COVID-19] cases and deaths, we noticed that this information was inconsistent, which made it unreliable, compromising the quality of media coverage,” she said.

Atoji adds that some problems persist in the data on testing and distribution of beds, which continue to negatively impact the coverage of public policies related to the pandemic.

"Not to mention that the Ministry of Health’s press conferences were not open for questions – when they were held – precisely at times when the crisis was on the rise,” she said.