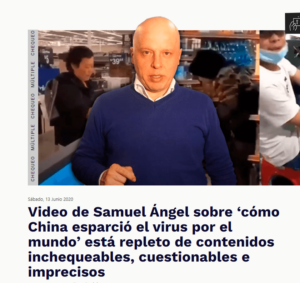 In the past two years, since the start of the COVID-19 pandemic, there has been a wave of false and misleading information on the Internet. Social networks and websites are full of hate speech, anti-vaccine movements, false remedies for diseases, and unfounded accusations, among others. The video-sharing platform, YouTube, has been a favorite for misinformers to use.

This is why 80 independent fact-checking organizations in more than 40 countries published an open letter to YouTube CEO Susan Wojcicki on Jan. 12, 2022. "YouTube is one of the main channels of disinformation in the world," says the letter that urges the platform to take effective measures against disinformation and misinformation by developing a roadmap of interventions that would help improve its information ecosystem, hand in hand with independent and non-partisan verification organizations.

​​In Latin America, 11 organizations signed the declaration. Among them are Animal Político-El Sabueso from México; Aos Fatos and Agência Lupa from Brasil; Bolivia Verifica; Cotejo.info from Venezuela; Chequeado from Argentina; Ecuador Chequea; La Silla Vacía and Colombiacheck  from Colombia; and Fast Check CL from Chile.

“We are signing this letter to open a dialogue with YouTube about the disinformation that circulates on its platform. Our goal is to alert and discuss the solutions that we suggest in the letter to contribute towards a healthier online environment,” Natália Leal, CEO of Agência Lupa in Brazil, told LatAm Journalism Review (LJR).

According to YouTube, the way the platform tackles disinformation is based on its “four Rs” principles: remove content that violates its policies, reduce recommendations of questionable content, raise trusted sources when reporting news and information, and reward trustworthy creators.

In addition, in March 2021, YouTube spokesperson Elena Hernández reported that the website had removed more than 30,000 videos that made misleading or false claims about COVID-19 vaccines in the past six months. She, in turn, reported that since February 2020, YouTube had removed a total of more than 800,000 videos that contained misinformation about the coronavirus.

The process for the deletion of audiovisual content, Hernandez said at the time, is done through a first alert from the company's artificial intelligence systems or by human reviewers, and later they receive an additional level of review.

However, according to the fact-checkers in the letter, YouTube has limited the debate on disinformation "to a false dichotomy between deleting or not deleting content."

“We have been telling the platform for years that false information is circulating. The measures they have taken for now are limited, even more so in Latin America and outside of the English language,” explained Pablo M. Fernández, Innovation and Communication Director of Chequeado in Argentina, to LJR.

The solutions proposed by the fact-checkers to reduce the spread of misinformation and misinformation on the video platform have been: first, to make a serious commitment to transparency, supporting independent research on the origin, scope and impact of different disinformation campaigns. Second, provide context or debunks overlaid on the content or as additional video content. Third, act against repeat disinformers and, lastly, expand efforts in languages other than English.

“We have been meeting with YouTube for years to get them to react against the disinformation that floods their platform and is financed by it. It happens everywhere, but it’s especially dramatic in non-English speaking countries and in the global South. The efforts that YouTube has made so far are not working: we know this because we have hundreds of examples of videos on disinformation about COVID-19, vaccines and conspiracies around the world that are still active,” said Clara Jiménez Cruz, in a Twitter thread. She is co-founder of Maldita.es and an European member of the Advisory Council of the International Fact Checking Network.

The letter gives examples of disinformation on YouTube worldwide and Latin America is not left out. In Brazil, the video platform has been used to amplify hate speech against vulnerable groups or to influence political decisions, according to fact-checkers.

In October 2021, a video circulated in which a woman denounced that the Landless Rural Workers Movement (MST, by its Portuguese acronym) had destroyed homes in the municipality of Santa Cruz do Capibaribe, in Pernambuco. The narrator suggests that these properties were meant to be given to poor families and she also states that this action was carried out at the behest of the Workers' Party (PT). However, it was false information, as reported by the Agencia Lupa. 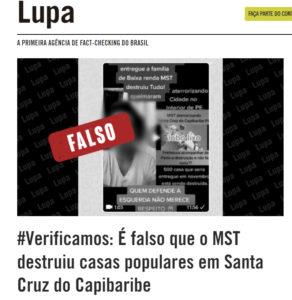 “Disinformation cases in Brazil are closely related to political polarization and the pandemic. They range from speeches against democratic institutions, through false information about the electoral process and allegations of fraud in elections, and culminating in lies about Covid-19 and vaccines, which have a great impact in real life,” Natália Leal said.

In the case of Colombia, the Colombiacheck team highlights two particular cases. One is the YouTube channel of Samuel Ángel, a lawyer, writer and executive director of the Catholic Solidarity Movement who has become known for his positions against feminism, gender equality and abortion.

In May 2020, he posted a video on 'how China spread the virus around the world' filled with inaccurate content. It is still online with more than 50 thousand views, but it only includes an age restriction.

Another is a video published by an account with more than 420,000 followers which was verified by Colombia-Check. The fact-checking site concluded that the video uses a misleading and unsubstantiated title to report an accusation made by the Venezuelan foreign minister against the Colombian president.

“In our case, we decided to sign the letter because of the importance of 2022 as a parliamentary and presidential election year in Colombia. And because during [past] three years of protests, known here as the Paro Nacioinal [National Strike], many videos from other countries and years [they were filmed] circulated on YouTube, overwhelming our own ability to verify everything,” Jeanfreddy Gutiérrez, director of Colombiacheck, told LJR.

In Chile, serious cases of misinformation on YouTube have also been reported. Fabian Padilla, journalist and founder of Fast Check CL, said that during the last presidential elections in that country a political group posted videos on the platform to misinform and also false information about COVID-19 vaccination that has been spread through denier networks.

In Chile, a video by Dr. Rodolfo Neira, a TV personality, gained traction. Neira showed in the video how a cell phone supposedly stuck to the arm of a woman recently vaccinated with Sinovac. He aimed to assure this way that vaccines produced a magnetic effect.

In other countries such as Venezuela, prominent cases of fake news on YouTube have not been reported, but they deem this is an issue that has been spreading throughout the world. “We signed because we observed that this issue is relevant in other contexts and I believe it could set a precedent for independent media to question big platforms. We stand in solidarity and we hope this [letter] opens a dialogue between journalism and the platforms,” Andrés Cañizales, director of Cotejo.info, told LJR.