“In my part of the world, I think watchdog media are really busy,” Ronderos said.

During the Global Investigative Journalism Conference (GIJC), which took place online only from Nov. 1 - 5, reporters around the world shared investigative techniques, challenges and innovations. Latin American investigative reporters featured prominently during the panels and workshops.

And as Carlos Eduardo Huertas, director of CONNECTAS, presented, the region is like a pot of gold for investigative topics: deforestation of the Amazon, regional migration, the Odebrecht scandal to name a few.

LatAm Journalism Review (LJR) attended panels with Latin American speakers in order to understand what is happening with investigative journalism in the region.

Ronderos, who was on the opening plenary, “Autocrats, Oligarchs and Kleptocrats – The Global Fight for a Watchdog Press,” is co-founder of the Latin American Center for Investigative Journalism (CLIP, for its acronym in Spanish). 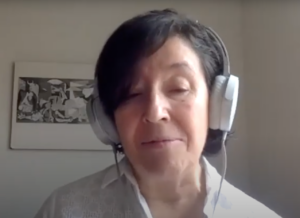 In just over two years, it has worked with 70 different teams of investigative reporters on the continent and produced about 15 investigations.

“These watchdog groups are small teams, sometimes with very little budget and sometimes big teams in big outlets still resisting and still surviving to do investigative journalism,” she said.

They’ve investigated topics like the political influence of fundamentalist Christian leaders, logging in the Amazon or even the murder of their own colleague.

“Collaborations show that despite the big challenges, despite the growing numbers of autocrats and kleptocrats in Latin America, investigative reporting is joining forces, they keep checking abuse in the government and they don’t give up,” she said.

Ronderos pointed to the example of the team at Armando.info that has investigated Colombian businessman Alex Saab, an ally of Venezuelan President Nicolas Maduro.

Reporters for Armando.info were actually forced into self-exile in 2018 following a defamation suit from Saab. The businessman was extradited from Cape Verde to the U.S. in October 2021, but most money laundering charges against him were dismissed by a U.S. judge because of agreements made for his extradition.

Journalists are facing a myriad of challenges right now with polarization, disinformation and the discrediting of democracy, Ronderos said. To confront this, she said journalists should embrace radical truth, collaborate and use the power of the collective.

Peruvian journalist Fabiola Torres, founder of health journalism site Salud con Lupa, spoke about understanding and reporting on medical research, as well as exposing industry interference and conflict of interest before and during COVID-19. 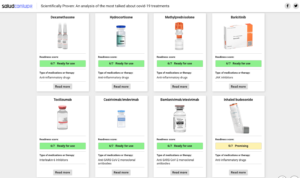 Screenshot from the investigation "Scientifically Proven," by Salud con Lupa.

“Scientific studies with poor methodology and inaccurate findings are exacerbating a COVID-19 misinformation crisis,” as Torres presented. She also pointed to marketers cashing in on pseudoscience, particularly concerning unproven treatments.

She shared questions her team asks when reporting on new medical research: How does this study fit into the big picture? How does it compare to other studies on the same issue? Is it really new? Who sponsored it? What is the clinical relevance? And more.

To avoid misinformation when reporting on healthcare, she said reporters should consult outside experts about weaknesses in the study and what the authors could have missed or left out.

Regarding Salud con Lupa’s own investigations into the pandemic, Torres presented “Scientifically Proven,” a trilingual resource of the most prevalent COVID-19 treatments. The project, which is updated weekly, analyzes evidence, studies and possible side effects of treatments.

Mexican investigative journalist Marcela Turati has spent two decades investigating the disappeared in her country. She presented her findings about covering organized crime, which is often behind these disappearances, at GIJC. 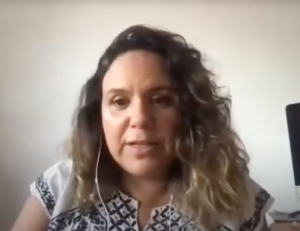 “First of all, we have to know that organized crime groups need to control territories, routes and everything that is inside of these regions. They need to control the economy, people, and all things and all the natural resources that are inside,” said Turati, co-founder of Quinto Elemento Lab. “For them, this is part of the business.”

People disturbing the business can be threatened, killed or disappeared.

Based on her investigations, she some shared tips for other reporters: map the territory, dynamics and stakeholders; plan your interviews, including the order and when you’ll contact subjects; be aware of the risks you confront and develop security protocols; react quickly when someone disappears, that includes tracing them digitally with the help of relatives; think of potential risks to victims; don’t reveal information that could spoil the police investigation; and verify, verify verify. 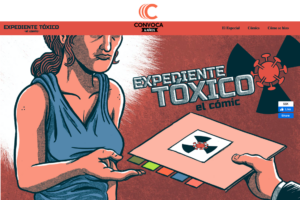 Journalist Milagros Salazar explained how the outlet she directs, Convoca, used comics as an innovative storytelling method to show how Peruvians are affected by extractive activities and industrial areas in the country.

“We thought that an interactive comic was a friendly format that could help citizens understand a complex reality,” she said.

Fourteen people worked on the three comics that make up “Toxic Files.” Among them were journalists, editors, data analysts, toxicologists, programmers and cartoonists.

When using comics for investigative journalism, she stressed maintaining quality of information, appointing someone with a comprehensive overview of the project, employing multidisciplinary teams, having effective communication channels and measuring the impact of your project.

Uncovering inequality in the Amazon

Journalist Elaíze Farias, co-founder of Amazônia Real, spoke about the investigative and independent work of her news agency, based in Manaus, in the state of Amazonas, in Brazil. She said that Amazônia Real was created in 2013 with the aim of giving visibility to excluded and marginalized populations in the region. 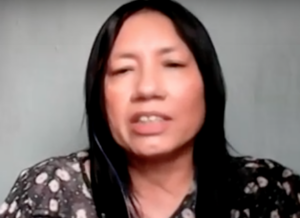 "Our proposal was to break with the media mechanism of reproduction of racism, colonization, ethnocentrism and Eurocentrism,” she explained.

She took advantage of the panel’s theme, Investigating Inequality, to talk about the country's regional inequality, which, according to her, "is as if it were divided between what is North and what is South.”

"What happens in the North region, which is where the Amazon is located, is not always portrayed in a credible or real way in what is called the big press. A newspaper located in São Paulo is considered national, but a media that is in the Northeast or in the North, it is local or regional, there are always these differences,” she said.

Farias also commented on the concept of inequality, which is often seen from a capitalist or consumerist perspective, while the reality of the Amazon is different. She highlights that there is indeed inequality of access to services, such as the Internet or medical care. But outsiders who visit the region, especially journalists, tend to measure poverty by the number of objects and possessions, while local cultures are not always based on "the valorization of capital and the accumulation of wealth, in the sense of material goods.”

Farias reinforced the importance of researching the region before covering it and forgetting about "this imaginary Amazon" that is portrayed in books and movies, full of stereotypes. The journalist explained that the region is much deeper and difficult to understand, even for those who were born and live there.

"The Amazon is a region of continental dimensions, it is heterogeneous, with a population of more than 20 million people, of different ethnic origin and social groups, where there are many barriers to communication and geographic access," she said. 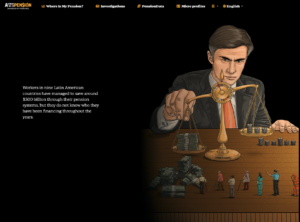 During a lightning round presentation, independent economic reporter Luisa García Tellez, of Peru, shared the investigation she directed with Lilia Saúl of Mexico.

The data-driven project “Where is my pension?” was published in 2021 in English and Spanish. More than 40 people worked on the project in which readers from nine countries in Latin America can track which companies and governments benefited from their retirement funds.

The project involved a lot of requests through access to information entities per country. Additionally, García Tellez explained it involved “amphibian work,” involving experts as teammates rather than sources. And the other main lesson she took away was collaboration: making sure partners know about information received and how to use internal tools developed for the investigation, and establishing fact-checking criteria and editorial publication processes up front. 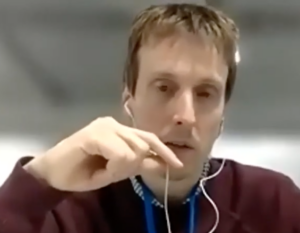 Dialogo Chino tracks investments from China across Latin America. That involves looking into subsidies on fossil fuels, hydropower and agriculture, as Koop explained.

“We want to give a voice to the people on the ground that are affected by those projects while simultaneously looking into the data and doing proper research on those projects,” he said.

Koop said that based on the first few days of the global climate conference, there is room for optimism, however expectations and demands are high.

“I think we’ve seen a fair number of announcements so far in the week covering coal, fossil fuels, deforestation, you name it,” Koop said. “Then we’ve got to actually follow them and see if the governments deliver on them, and that’s going to be the challenge after COP.”

Lisseth Boon, coordinator of the investigative unit at Venezuelan site Runrun.es and Alianza Rebelde Investiga (ARI), presented three of her favorite tools for creating visualizations as part of a lightning round at GIJC.

For building networks, structures and identifying links between people, organizations and companies, she recommends CmapTools.

For creating mental maps and flowcharts, as journalists used for the collaborative investigation FinCEN Files, she recommends LucidChart.

And finally, for mapping people and complex interactions, she uses Kumu.

Making money to support your work

One of the biggest challenges for investigative media outlets is how to be financially sustainable. 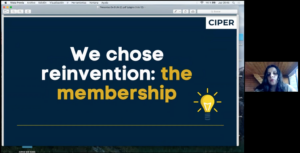 In April 2019, CIPER’s main funder left and the outlet had just three journalists. It had to reinvent itself.

“We bet on a membership system that would make the contributions of our readers the most important pillar of financing,” Urquieta said.

Today, it has almost 5,000 members, 70 percent of its journalistic work is financed by Community +CIPER, it has seven journalists and a sustainability team.

So, how does it add partners? Urquieta emphasized publishing information that’s relevant to citizens, designing a viralization strategy for social media, seeing alliances to distribute content with other media outlets, being transparent about how you run the media outlet and always seeking to broaden your horizon.

One point she emphasized over and over was the close relationship CIPER maintains with its members.

“We maintain a fluid and close relationship through emails and telephone,” she said. “We make them feel part of the family.”

Find tip sheets and presentations from many of the GIJC sessions here. You can also find more coverage of the conference in Spanish.