The first day of the soccer World Cup, which this year takes place in Russia, has yielded one of the most regrettable moments of news coverage of the event to date. Colombian reporter Julieth González Therán was delivering a live broadcast for Deutsche Welle (DW) in front of the stadium that was about to host Russia and Saudi Arabia when a man hugged her, groped her and kissed her on the face before running off screen. 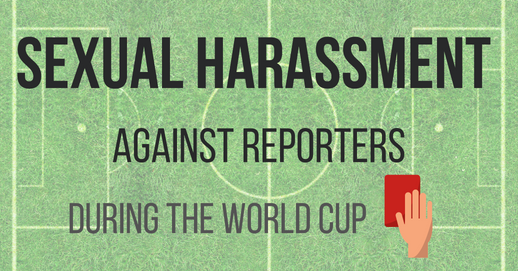 The first day of the soccer World Cup, which this year takes place in Russia, has yielded one of the most regrettable moments of news coverage of the event to date. Colombian reporter Julieth González Therán was delivering a live broadcast for Deutsche Welle (DW) in front of the stadium that was about to host Russia and Saudi Arabia when a man hugged her, groped her and kissed her on the face before running off screen.

Brazilian reporter Julia Guimarães, of Globo Group, was similarly harassed twice during the first two weeks of the global sporting event, the journalist reported via Twitter. The last of them happened while Guimarães was preparing to go live on June 24. A fan tried to kiss her and she pulled away, rebuking him for the harassment. "Don’t do this, never do this again, okay? Don’t do this. I don’t allow you to do that. Never. Okay? This is not polite, this is not right. Never do this,” the journalist said.

The two episodes come amid several cases of sexual harassment and assault against women by fans that were caught on video during the World Cup in Russia. The first that had international repercussions was carried out by a group of Brazilians, who surrounded and exposed a Russian woman to ridicule as they sang and made her repeat a vulgar expression. Some were identified by acquaintances on social networks and one was dismissed from his job in Brazil, O Globo reported. A Russian jurist denounced them for violence and public humiliation to the honor and dignity of another person, according to UOL.

Guimarães had already written about the machismo faced by her and her colleagues in Russia even before the episode that was recorded by cameras on the 24th. "The video of the group of Brazilians harassing the young Russian at the beginning of this Cup is bleak. The repercussion, however, was a respite. Knowing that we currently live in a context where it is no longer tolerated relieves us," wrote Guimarães and reporter Amanda Kestelman, on Globo Esporte.

"We are already accustomed/prepared for unpleasant situations with fans in the stadiums that we go to in our day-to -day routines. But this World Cup has been by far the most hostile environment," they said.

The Twitter profile of Deutsche Welle's sports section, dw_sports, condemned the aggression suffered by the Colombian reporter in Russia. "Sexual harassment is not okay. It needs to stop. In football, and elsewhere."

A DW reporter was sexually harassed while covering the #WorldCup. @JULIETHCGT was kissed, groped by a man while reporting from Moscow.

Sexual harassment is not okay. It needs to stop. In football, and elsewhere.pic.twitter.com/O0S1a1F4Es

Globo Esporte, part of Grupo Globo, said the harassment suffered by the Brazilian journalist was "lamentable.” Guimarães told the publication that it is a "horrible" situation and that she feels "defenseless and vulnerable."

"This is the second time that this has happened to me here in Russia. It never happened in Brazil, but let it be clear that it is fortunate, because it happens a lot in Brazil, we have seen it several times with colleagues in the press," she said.

The aggression against the sports journalists shows the generalized machismo that these professionals face while they carry out their work –something raised by the Brazilian campaign #DeixaElaTrabalhar (Let Her Work), which was launched in March of this year. The campaign’s pertinence, regrettably, has been renewed during the World Cup.

At the time, several journalists mobilized after reporter Bruna Dealtry was kissed and harassed by fans during a live broadcast while covering the end of a soccer match in Rio de Janeiro. In addition to sports journalism professionals, athletes and soccer clubs have also joined the movement and have broadcasted the hashtag on social media platforms such as Twitter, Facebook and Instagram.

Since the start of the football world championships, in addition to Julieth González Therán and Júlia Guimarães, there have been at least three other incidents of harassment against journalists in Russia. Russia's Barbara Gerneza was harassed by Brazilian fans on June 19, Sweden's Malin Wahlberg was targeted by fans from her own country on the 25th, and Argentine fans tried to grab and forcefully kiss a reporter while she tried to interview them after the match between Argentina and Iceland, on the 16th.

González Therán, who continued steadily in her broadcast on DW after the aggression, expressed solidarity with Guimarães and described her reaction as "brave." "The violent act of a fan is sad, worse sometimes it is the reaction of many who do not see it as harassment," she wrote on her Twitter account.

“If you're doing your job, concentrated and someone throws you over, kisses you, maybe they’re drunk and doing that while you’re doing your job is not disrespectful, it’s harassment,” she continued, adding that there were "many regrettable" comments that demeaned the aggression she suffered.

The fan who groped the Colombian reporter came to the DW studio in Moscow and apologized for the harassment. Identified by the German broadcaster as Ruslan, he offered "the most profound apologies" to González Therán

"I acted coarsely and did not think that I will cause you confusion and shock. I know your job is very hard, and I hope that you will never face another such incident in your career. I'm really sorry," he said.

The journalist told Ruslan that what happened was "unacceptable" and "disrespectful," but that the fan did "the right thing" by apologizing and she accepted the attempt to make amends. On her Twitter account, González Therán said that she closed the case after Ruslan's apology. However, after the recent episode of televised harassment suffered by Guimarães, the Colombian said that this "will not be the last" during this Cup.