Let’s create a fact-checking army in Latin America and the Caribbean, says instructor of Knight Center’s next MOOC

Brazilian journalist Cristina Tardáguila wants to build a global army of fact-checkers in Latin America and the Caribbean.“Anyone can become a fact-checker,” said Tardáguila, associate director of the International Fact-Checking Network (IFCN). 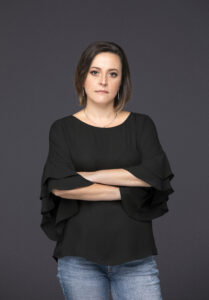 “We can even take it one step further, everybody can and should become a fact-checker. Because fact-checkers will not solve this issue [of disinformation] by themselves. If the capacity of assessing the veracity of content isn’t widely spread in our society, then we are going to be in trouble,” Tardáguila said.

And she is in a hurry to form that army of fact-checkers because of the huge problems of disinformation surrounding the coronavirus pandemic.

As part of the battle strategy, Tardáguila is teaching the Knight Center’s next massive open online course (MOOC), “Disinformation and Fact-Checking in Times of COVID-19 in Latin America and the Caribbean.”

Offered in Spanish, Portuguese and Guaraní from Feb. 15 to March 14, this free online course is produced by the Knight Center for Journalism in the Americas, under the project “#CoronavirusFacts, Addressing the ‘Disinfodemic’ on COVID-19,” which is implemented by UNESCO and funded by the European Union..

Registration for the MOOC is open. Click here for more information about this program and how to register for the versions in Spanish, Portuguese and Guaraní.

“The battle against the infodemic is probably the biggest battle that fact-checkers have faced so far,” Tardáguila said, referring to the disinformation “epidemic” that has been aggravating the COVID-19 pandemic in many countries..

The reasons are threefold.

“It’s been a marathon. It started back in January 2020 and it’s been a year and it doesn’t seem like it’s even close to ending,” she explained.

The second reason relates to hoaxes that have been debunked, but then somehow come back to life – what Tardáguila refers to as “zombie hoaxes.”

“We have been debunking very similar content over and over and over for a year,” she said. Much of this disinformation will pop up in one country and then appear in another months later.

“You see that the virus brings the disease, but also brings hoaxes,” Tardáguila said. In the case of Latin America and the Caribbean, the virus and the hoaxes arrived months later than in other parts of the world, which presents its own challenges.

“The third reason is you notice that there is so much that needs to be done by other people,” Tardáguila said. “I’m saying fact-checkers alone cannot solve the disinformation issue.”

As part of the Knight Center MOOC, Tardáguila will also teach about fact-checking around vaccines produced to fight the coronavirus. As she explained, they have their own set of hoaxes related to topics like infertility, physical deformation, technology and fake vaccines.

Through the IFCN at the Poynter Institute, Tardáguila has coordinated the#CoronavirusFacts Alliance, which unites 99 organizations in 43 countries working in 77 languages and 16 different time zones to check information about the COVID-19 pandemic.

The fact-checks are then published in a database available in English, Spanish and Portuguese, but they are also shared using the #CoronavirusFacts hashtag on social media. The alliance has published 10,300+ fact-checks to date.

Members of the IFCN at the Global Fact 6 conference (Courtesy)

The IFCN was recently nominated for the Nobel Peace Prize by Norwegian lawmaker and former Minister of Culture and Education, Trine Skei Grande.

“‘In war, truth is the first victim.’ And we live in a time where fighting lies is so important,” Skei Grande wrote via Twitter. “This year I have nominated the fact checkers for the Nobel Peace Prize. They need our support.”

Tardáguila’s years of experience in the fact-checking community have shown her what is needed for a good fact-checker.

Number one is being “ready to be open to doubt,” the journalist explained.

“The second thing that you need is to be ready to spend time fighting for data. Data isn’t easy to find. And reliable data is even worse,” she added.

Fact-checkers have to learn how to deal with different kinds of hoaxes and falsehoods, Tardáguila explained.

“The ones that are being innocently shared, the solution is education and a lot of training and a lot of patience,” she said. “We also need to learn how to deal with coordinated, intentional disinformation, and that demands a clear debate around regulations, what platforms can do, or not, and also about tools to make fact-checkers faster, more precise.”

Despite these challenges, Tardáguila forges on to build a fact-checking force that can fight mis- and disinformation common in much of the world, including on her home continent.