Luminate, from the Omidyar Group, is investing $920,000 in Brazil's Nexo. Here’s what the digital newspaper plans to do with it.

In three years and three months of operation, Brazilian site Nexo Jornal has become a regional and global reference for digital journalism. In addition to the international awards it has received, another significant indication of its position is the $920,000 grant it just received from Luminate, an organization of the Omidyar Group that has bet on independent media around the world as drivers of social change and guardian of democracy.

Nexo announced the partnership at the end of January, which will focus on broadening the scope and impact of the Brazilian site’s brand of journalism of context, financed up until this point by investments from its co-founders and subscription revenue.

"There is a lot of affinity between Luminate's mission and the vision of the newspaper," Paula Miraglia, co-founder and director of Nexo, told the Knight Center. The support, she said, "is an acknowledgment of the quality of our work and of Nexo as an important actor in journalism in Brazil. If you look at other projects that Luminate supports in the world, they are initiatives that are thinking about journalism in a very innovative way." 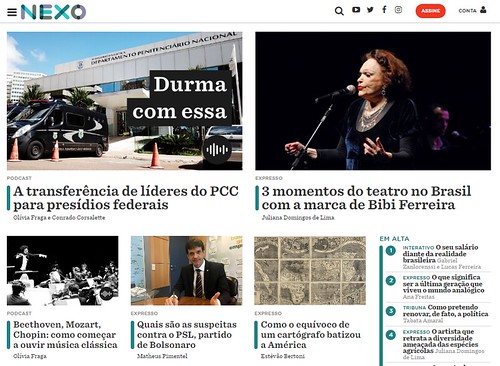 Nexo is 100% digital and focuses on context journalism (Screenshot)

The Omidyar group was founded and is funded entirely by Franco-American Pierre Omidyar, co-founder of eBay, and his wife, the biologist Pam Omidyar. The group brings together a series of initiatives, companies and philanthropic organizations, such as Luminate, that are dedicated to catalyzing social impact. Among the media in the region that are or have already been supported by the group are the digital sites Agência Pública of Brazil, El Faro of El Salvador, Ojo Público of Peru, Chequeado of Argentina and newspaper La Diaria of Uruguay.

Luminate, launched in October 2018 based on the group's experience in governance and citizen engagement, is currently supporting journalistic initiatives such as the International Consortium for Investigative Journalism (ICIJ), Forbidden Stories, The Correspondent and Africa Check.

“We've been following the work of Nexo since they were created. As we kept talking to partners in Brazil about news and independent media ecosystem and the kinds of outlets that they trusted and supported and were interested in, Nexo's name always kept coming up,” Felipe Estefan, director of Luminate for Latin America, told the Knight Center. “We were very impressed by their commitment to leveraging digital channels to reach a wide audience and to provide quality content that promotes democratic debate.”

According to Estefan, Luminate sought out Nexo in early 2018 and began talks about potentially supporting the digital site. “As we talked more with them about their commitment to building a sustainable and commercially viable media venture, the things that impressed us watching from afar proved to be true once we got to know them even better, and that's what led us to this commitment that has now been announced.”

According to Miraglia, the support of Luminate is the first external investment into Nexo which now has 33 people in its team. The digital newspaper was launched and has been maintained to this point with investment from its founders – anthropologist Miraglia, engineer Renata Rizzi and journalist Conrado Corsalette – and with subscription revenue from Nexo and the platforms NexoEDU – which offers journalistic content meant for use in the classroom – and Escola N – offering free courses on contemporary issues.

The director said that Nexo does not disclose audience figures, operating costs and revenue, but that it is expected to reach break-even in 2019. "The expectation is that the newspaper will pay for itself this year with subscriptions and other sources of revenue. The subscriptions are certainly the most significant, but it's the combination of all those sources that we believe will make the newspaper sustainable."

Miraglia gauges that the today Nexo has "a consolidated operation, a newsroom that works and that it has developed an extremely collaborative way to produce, joining very diverse skills, which is the newspaper’s brand.” "What we intend to do this year, and Luminate's investment comes at that moment, is to invest in areas where we have not invested so much until now," such as improving the subscription system and having better strategies for retention and customer service, said the director of the digital newspaper.

"We have a great relationship with our subscribers and we see tremendous value in this relationship, so let's invest in it. And to invest even more in terms of technology, which is very important for us, and to ensure that even more people know about Nexo," Miraglia said.

Estefan said that Luminate seeks to work with organizations that have “a track record of having impact and clear sustainability models” and “that inspire us and where we think we can have value.” In the case of Nexo, in addition to these factors, “we were truly inspired by the founders’ commitment to their work.” 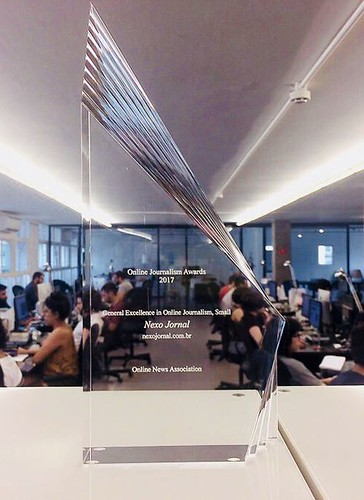 In 2017, Nexo became the first Brazilian outlet to be honored with excelence award in online journalism from the Online Journalism Association (ONA) (Courtesy/Nexo)

“They're putting in money of their own, they're putting their time and they are building something that has become a model for how to create an independent media venture. When we realized that, we started talking to them about how we could structure a partnership that would allow us to support them so that they can continue realizing that vision.”

The director from Luminate explained that the organization makes different types of investments in the projects it supports, but decided to give Nexo a grant because “we felt strongly that they shouldn't be held into returning that money because what they needed was more resources to be able to do more good work.”

Estefan stressed that there will be no editorial interference from Luminate, but the organization will follow Nexo’s work towards the objectives agreed upon between the two entities. “It's less about things that they have to do for us and it's more so things that we have agreed together with them that would be good indicators to show us whether they're on target to meet their goals, and if not, how we could help them get there,” he explained. Among these indicators are audience and revenue numbers, but also the social impact and scope of Nexo’s content.

The conversation between Luminate and Nexo began before the elections in Brazil, which intensified political polarization and was the setting for an increase in distrust of the press, encouraged by Jair Bolsonaro (PSL), the presidential candidate who won the elections and is now president of the country, and his allies.

The investment in journalism at this time, therefore, has an even more significant weight.

"Nexo's mission is to think of journalism as a fundamental element to contribute to the strengthening of democracy in Brazil. Luminate sees independent journalism as an essential element for democracies. So there is a convergence of visions, no doubt, that gains importance when you are living in this moment when journalism is being disqualified when it does its work," Miraglia notes.

“There is no democratic government without independent media, without the right of the press to do their job and to question authority, without citizens being informed about what is happening in their environment,” Estefan said. “Considering that independent journalism is essential to democracy, we're excited to continue working in Brazil to make sure that more independent voices can continue their role in protecting democracy by informing citizens and holding the powerful to account, regardless of who they are and the party that they come from.”