Aware that widespread disinformation and threats to press freedom put democracy at risk, the General Secretariat of the Organization of American States (OAS) launched an initiative to support independent journalism and access to qualified information in the region. The Center for Media Integrity of the Americas intends to invest in the training and work of journalists as a means of strengthening American democracies. Its first activity will be a conference in Washington D.C., in September.

The Center was announced by OAS Secretary General Luis Almagro during the most recent Summit of the Americas, which took place in Los Angeles, in early June. The Washington Post newspaper and the Gabo Foundation are founding partners of the Center, "serving on the Advisory Council and as convening centers, possibly hosting future activities," according to the press release announcing the initiative. 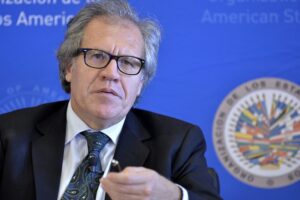 The press release also states that the Center "will be entirely financed by voluntary donations from the private, academic, civil society, and philanthropic sectors" and that although it is being launched as a project of the OAS General Secretariat, it will soon become an independent non-profit organization. The Center, therefore, will not receive money from OAS member states.

The Center's first executive director is a former U.S. Ambassador to Panama John Feeley, a diplomat with years of work in Latin American and Caribbean countries.

Basically, what we saw was a hemispheric — in the United States and in Latin America and the Caribbean — media landscape in which polarization, disinformation and the pressures on journalists were increasing significantly,” Feely told LatAm Journalism Review (LJR). “This obviously has a negative effect on the quality of democracies. The freedom of the press, the freedom of expression, in one way or another, is ingrained in either the Constitutions or the practices of all vibrant democracies, And, quite frankly, in the last decade what we have seen is a shrinking of that space and pressure upon that space.”

According to him, the OAS has decided to contribute “to fighting this media landscape that is increasingly worrisome and has had such a negative effect on quality journalism.”

“The way we're going to do it is by strengthening the human capital, the very journalists that are going to write the investigative stories across all platforms, whether it's written journalism, podcasts, live streaming, digital newspapers, online, etc.,” Feeley said. “The medium is not important. What is important is that word in our title: integrity. That journalists report what's going on with integrity and with high journalistic standards.”

One of the Center's lines of action will be to hold conferences, Feeley said, and the first activity being planned is a conference to be held in September in Washington, D.C., the U.S. capital and home of the OAS headquarters.

“It'll be entitled 'Exiled, but not silenced.' We plan on having several journalists from Latin America and the Caribbean who’ve had to leave their home countries because they’ve been either threatened by governments or they've been threatened by other actors in society and it's no longer safe for them to exercise their chosen profession of journalism at home,” Feeley told LJR.

John Feeley, executive-director of the Center for Media Integrity of the Americas. (Courtesy)

The Center plans to hold a series of events to draw attention to issues related to press freedom and quality journalism, said the director of the initiative. He also pointed out that the Center is "in close coordination" with the Special Rapporteur for Freedom of Expression (RELE) of the Inter-American Commission on Human Rights (IACHR), the main organ of the OAS. Colombian lawyer Pedro Vaca, the current IACHR Special Rapporteur for Freedom of Expression, is also a member of the Advisory Board of the new Center.

Training and grants for journalists

The Center intends to help strengthen the region's journalists through training seminars and support for the production of investigative journalism. The intention is to hold recurring journalism seminars led by the University of Maryland's Philip Merrill School of Journalism, a strategic partner of the Center. According to Feeley, these seminars will last one week and will receive between 10 and 15 journalists and “possibly social media influencers” from the Americas. “We're going to develop a seminar curriculum to not just go over best practices and how to conduct high-quality journalism, but also to provide networking for these people,” he said.

Another form of support for journalists in the region will be offering scholarships to encourage the production of journalistic projects. “The idea is to be able to give a journalist who is already working for a particular media, or perhaps even a freelance journalist, six to 12 months of money, basically, to allow them to live and pursue the investigation that really moves them, that motivates them, that they think is important to be able to share with the citizens of their country so that they have better information about what is going on around them,” Feeley said.

The Center also hopes to offer journalists mentoring with some of the 31 professionals who form its Advisory Board. According to Feeley, the Council is made up of “people who have a lifelong journalistic or professional communications experience that has been characterized by their integrity.”

According to Feeley, the journalists who will receive the grants “will  be able to reach out to this board of advisors for help, for assistance, for somebody who's been there, done that, who knows how to do it and can encourage them and help them concretely along the way as they develop whatever the end product is of their investigation.”

Digital influencers as allies of journalism

One of the members of the Advisory Board is Jaime Abello, director and co-founder of the Gabo Foundation, a founding partner of the initiative. According to him, the Center “will serve, by the very nature of the organization that it supports, that it promotes, which is the OAS, it will also serve as a meeting point for leaders of journalism and communication with other sectors, especially with government and political sectors. All of this is based on the idea of independent journalism, of journalism that is basically on the side of the audiences, on the side of the citizens, that is at the service of information based on verified facts,” Abello told LJR.

Abello also highlighted that “it should be noted that we will not only work, as initially thought, with professional journalists in the classic sense. But also with this new modality, let's say, of communicative leadership represented by the so-called influencers of social media.”

Indeed, one of the concerns that gave rise to the Center is the threat to democracy posed by "malicious actors who misuse the many communication technologies currently at our disposal to spread disinformation and intentionally misinformation to promote their interests at any cost," as expressed by the OAS Secretary General at the launch of the initiative.

So, although this is a journalism-centric program, Feeley said, “influencers who have shown a proclivity to talk about public interest issues, folks who are going to be a little bit more involved in commenting on current social, economic and political dynamics in the countries where they have their followings,” can also be invited to participate in the training seminars.

On June 16, days after the Center's official launch, the Association of Caribbean Media Professionals (ACM) released an open letter addressed to the OAS Secretary General expressing concern about the alleged exclusion of Caribbean journalists from the initiative.

“We recognise the value of the hemispheric context as outlined” in the OAS fact sheet about the new Center, the ACM wrote. “We are however concerned that as an institution to be “nested within the Organization of American States,” there has been absolutely no consultation on the development of such a Center with leading professional associations, representative industry bodies and academic institutions active in the 14 CARICOM Member States of the OAS.”

The ACM also criticized the fact that, at that time, the list of members of the Advisory Board of the new Center did not include any Caribbean communicators or journalists. “In our view, this does not augur well for the inclusivity required to ensure full hemispheric engagement, resilience, and success,” the association said.

Nazima Raghubir, president of ACM, told LJR that “our general observation is that there is routinised omission of the English-speaking Caribbean by a high number of inter-governmental, civil society and other hemispheric groupings when questions of concern to us all are being discussed and/or resolved. This episode is simply another one for which our response was crafted in order to draw attention to the broader question of exclusion.”

According to her, Luis Almagro, Secretary General of the OAS, responded to ACM's letter “in a very timely manner.” Raghubir said that in correspondence to the association on June 20, Almagro said that he had communicated to Feeley the “the need to include representatives from the Caribbean on the board of advisors,” of the Center and that, in fact, “this had always been the idea from the beginning, but there have been some issues that have delayed the selection of the nationals of Caricom countries that should integrate the Board of the project,”

Feeley told LJR that the formation of the Advisory Board “took several months” and that originally two professionals from the Caribbean were invited, but declined due to other commitments. “We were kind of up against the time pressure of our stated launch at the Summit of the Americas because we wanted to be able to take advantage of that opportunity and we didn't have any Caribbeans on the board at that time,” he said.

“We received the letter from Harvey Panka and literally within two days I was in conversations with Harvey and his colleagues. I'm very happy to report that we have two outstanding women who are both professionals in the English-speaking Caribbean who are on our Board of advisors right now: Kiran Maharaj [Trinidad and Tobago] and Sonia Gill [Jamaica],” Feeley said.

“We would not have contemplated doing this hemisphere initiative without the participation of Caribbeans. I think it's fair to say that they will bring their unique perspective of small islands. These are countries where perhaps democracy is not as much under attack as it is in some other places, but they certainly have their own unique set of challenges to producing quality journalism. We want to give that effort a voice and a platform,” the Center’s director said.