Rubén Pat Caiuch, director of Semanario Playa News, was shot and killed in the early morning of July 24 outside a bar in Playa del Carmen, Quintana Roo. 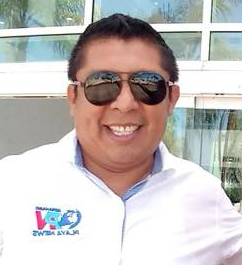 His death comes less than a month after José Guadalupe Chan Dzib, also a reporter for Semanario Playa News and other media outlets. Chan Dzib was killed on June 29 in the municipality of Felipe Carrillo Puerto in Quintana Roo, just ahead of Mexican general elections.

Earlier in June, Pat Caiuch told the Committee to Protect Journalists (CPJ) that local police in Playa del Carmen, beat, jailed and threatened him for his work, the organization reported at the time.

“They told me to stop publishing articles about a local police chief, and that I knew what would be coming to me if I didn’t,” he told CPJ.

According to Pat Caiuch, the anger concerned an article about banners a criminal group allegedly hung around the city that accused the local police chief of selling Playa del Carmen to a rival gang, CPJ said.

Following the incident, Pat said he was afraid to leave his home.

Jan-Alberto Hootsen, CPJ Mexico correspondent, told the Knight Center he regularly spoke with Pat Caiuch, the last time on July 4. He confirmed that the journalist was incorporated under the Federal Mechanism for Protection of Journalists and Human Rights Defenders, but did not know the specifics of his protection scheme.

Reporters Without Borders (RSF for its acronym in French) said Pat Caiuch received threats via WhatsApp in May, but only received a GPS and panic button following a request to the Federal Mechanism.

"When RSF contacted Pat after Chan's murder, he complained about the inadequacy of these protective measures and reported that the threats were continuing," the organization wrote. "RSF then contacted the Federal Mechanism and requested urgent reinforcement of Pat's protection. The request went unanswered."

Following Pat Caiuch’s murder, the Municipality of Solidaridad, whose municipal seat is the town of Playa del Carmen, said local police contacted the State Attorney General’s Office and investigations were being carried out. It also reiterated a commitment to press freedom and journalism.

The Attorney General’s Office of Quintana Roo confirmed it was investigating the case and said it “condemns the unfortunate events in which journalism is affected through intimidation because of violent attacks.”

"The Mexican authorities must draw the inevitable conclusion from this terrible event, namely that the Federal Mechanism for Protecting Journalists failed in its duty to protect Rubén Pat although his situation of vulnerability had been known for a long time," said Emmanuel Colombié, heads of RSF's Latin America desk, according to an organization release.

Authorities also are investigating the murder of another journalist, in Iztapalapa near Mexico City. Luis Pérez García, 80-year-old director of the magazine Encuesta de Hoy and social activist, was killed by a blow to the head by home intruders, according to the Federation of Associations of Journalists of Mexico (Fapermex). The house was also set on fire.

The organization said it “doubles its demand for justice and for the implementation of protection mechanisms for journalists, press workers, their relatives and friends who have also been victimized in acts, including direct ones, to intimidate communicators. ENOUGH! It is our permanent cry.”