In Mexico, killing a journalist is like "killing nobody.” This is demonstrated by the high levels of violence against journalists and impunity in these cases. It is from this premise that Reporteras en Guardia (Reporters on Guard) was born. The group is comprised of 140 journalists – all women – in 24 of the 32 Mexican states (including Mexico City), dedicated to remembering each of the 176 colleagues murdered or disappeared in the country from the year 2000 until October 2018. 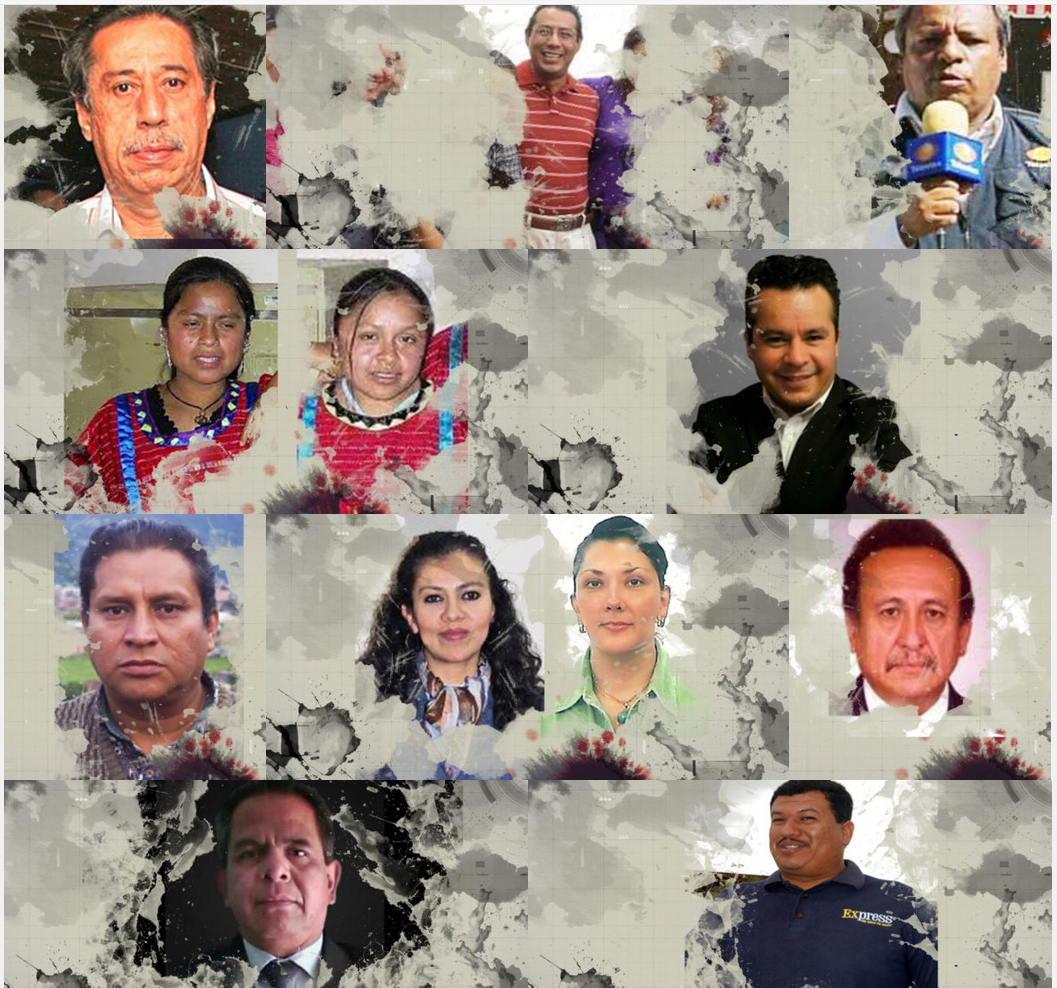 Reporteras en Guardia’s first project is an online memorial of the journalists killed or disappeared in Mexico. (Screenshot)

Launched at the end of August, the Matar a Nadie (Kill No One) memorial is the collective’s main project that began as a "conversation over coffee" between two colleagues, as told by Georgina Montalvo, a freelance journalist with 15 years of professional experience and a member of the group.

“The Reporteras en Guardia initiative began to gestate at the beginning of this year in a conversation over coffee between Vania [Pigeonutt] and Laura Castellanos. They began to talk about the situation of journalists here in Mexico, and how civil organizations were monitoring it.”

They decided to look at the databases on violence against journalists systematized by four organizations: Article 19 Mexico, Communication and Information of Women (CIMAC), Reporters Without Borders (RSF) and Committee for the Protection of Journalists (CPJ).

Crossing the four databases, they have reached the number of 176 communicators – journalists, photojournalists, radio journalists and other press workers – victims of murder or forced disappearance in the country since 2000.

“And beyond the figures what we wanted to do, the spirit of this memorial that’s the first project of Reporteras en Guardia, are the profiles of each of these fellow reporters. We have been discovering, through the stories, that they are people who held diverse positions in newsrooms. From reporters who were in the street, editors, columnists, owners of the media. It is precisely about making a great record of who these people were, beyond the numbers,” Montalvo said.

The profiles are reported and written by the journalist members of the collective, which is organized as a network that covers almost all of Mexico. The group was formed from the core of coordinators, which in addition to Pigeonutt and Castellanos includes Dunia Rodríguez, who takes care of the distribution of the profiles between the reporters, and Silvia Gámez, editorial coordinator of the project.

They were inviting colleagues who they felt could be interested in the project and who worked in the regions where the journalists who were being profiled lived.

“The objective also in this sense was that they were the same colleagues from the States that correspond to the profiles, because they know the context and live in these remote regions, many in areas where there are practically very few reporters, much less women,” Vania Pigeonutt told the Knight Center.

Although both male and female journalists are being profiled, the collective Reporteras en Guardia is made up exclusively of women. One of the reasons is the intention to make the work of women journalists, “historically invisible” in Mexico, visible, Pigeonutt said.

“We are more than half of the population of the world, and we actually have a particular view of the problems, and more when we are directly affected,” Montalvo said. “The feminine presence in the guild is growing, and we are convinced that from this century on, the feminine view has led to us giving a different reading to all the victims of the cases of violence that have been recorded in the country, since it's been the women who have turned to see the expansive wave of the effects of violence and to talk more about the people affected.”

She notes that a network of women is also “a network of protection, to protect each other in daily life, in the daily practice of reporting, and even emotional support, the conversation between women, between friends, with the solidarity many of us show.”

Reporters of very different ages and trajectories participate in the project, Montalvo said, which has translated into an enriching professional experience for all involved. “We are all learning from each other,” she said.

Their work is voluntary, Montalvo said. None of the journalists involved in the production of the memorial are getting paid for their work. They bear the cost of reporting from their own pocket and with personal donations from colleagues and supporters of the project.

“It is a project of camaraderie, and we are convinced that it is necessary to do it. There are no resources from any institution, civil organization, but from citizens who share our vision with respect to the importance the journalistic guild has in society,” she said.

Impunity in crimes against journalists

To date, 38 profiles have been posted for the Matar a Nadie memorial, and they expect to have all 176 profiles published by the beginning of 2019. In addition to telling about the life of the person killed or missing and the circumstances of their death or disappearance, the work of Reporteras en Guardia also includes investigating the progress of the investigation or prosecution of crimes.

Their intention is to establish the rate of impunity in the crimes they are reporting on, which they may divulge at the end of the work. In January this year, Rodrigo Santiago Juárez, the director of the Crimes against Journalists and Civil Defenders of Human Rights Program of the National Human Rights Commission (CNDH) of Mexico, said that 90 percent of the attacks against journalists registered since 2000 had gone unpunished, according to the magazine Proceso.

While most memorial profiles deal with journalists murdered because of their work, this does not apply to all cases reported by Reporteras en Guardia. There is the case of Jazmín Martínez Sánchez, abducted and murdered by criminals who tried to extort money from her family, and Selene Hernández León, who committed suicide after developing schizophrenia and psychosis allegedly as a result of her work as a investigative journalist, according to her profile on the site.

“We decided to consider them because we consider them to be attacks against freedom of expression and journalism,” Pigeonutt said, explaining that they consider that all journalists have been victims of organized violence in Mexico, even if they have not been killed or disappeared because of the work they did.

“Organized violence is a term to stop the naming of the narco as the sole group responsible for everything,” she said.

“There is a cost for those who denounce acts of corruption, and beyond drug trafficking, which is precisely the discourse we wanted to counteract with all these profiles, to give evidence that the crimes against journalists are not the product of organized crime alone,” Montalvo said. “The State, the institutions, at the three levels of government, are in collusion [with organized crime]. The people in power here feel the impunity when attacking a journalist that has published information that bothers them.”

On Oct. 25, Reporteras en Guardia held a protest in front of the National Palace, headquarters of the Mexican government, in Mexico City. They highlighted the #SaldoEPN (#BalanceEPN): 65 journalists murdered or disappeared in the six years of President Enrique Peña Nieto, whose government comes to an end on Nov. 30. 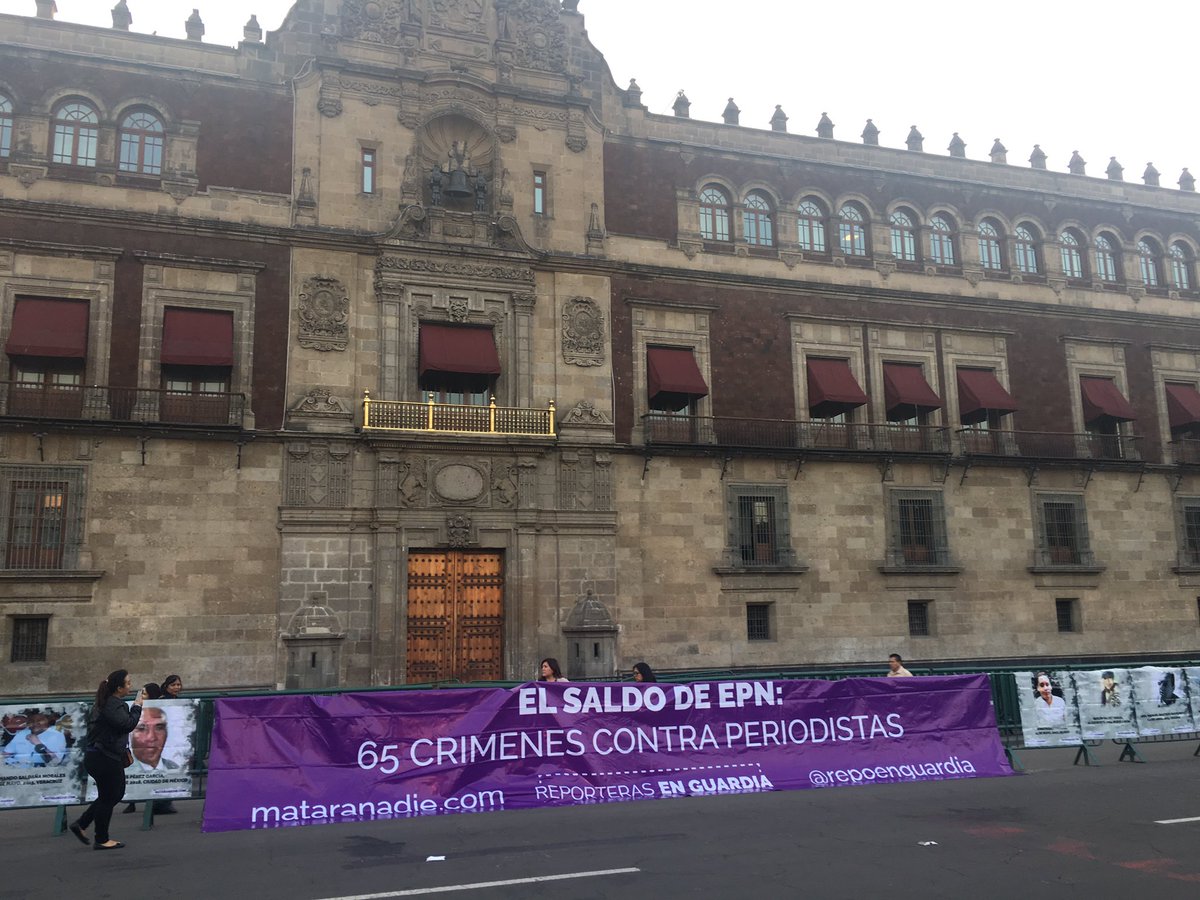 Reporteras en Guardia organized a protest in front of the National Palace in Mexico City for the journalists killed while President Enrique Peña Nieto has been in office. (Courtesy)

“We want to emphasize the fact that, yes, Peña Nieto, you leave and one of the pending balances that you leave to this society, to the country that you governed for six years, is what you have with the journalistic guild,” Montalvo said. “We wanted to make it clear to directly challenge him, that he, as responsible for national security, leaves this balance pending.”

Montalvo recalled the budget crisis in the protection mechanism for journalists and human rights defenders in Mexico, which was about to run out of money in September this year. “Like many mechanisms in Mexico, when it comes to putting them to work, they do not have the right conditions to be effective in the protection and defense of journalists.”

Reporteras en Guardia intends to take the issue of violence against journalists in Mexico to the agenda of the new president, Andrés Manuel López Obrador, who takes office on Dec. 1. As a candidate, López Obrador mentioned more than once the need to strengthen the protection of journalists in the country, but after being elected did not speak about the subject again.

“Now that the new government is going to start, we are not going to take our finger off the issue, we will repeatedly give reminders of the balance that [EPN] leaves,” Montalvo said. “Obviously, the new government also has the obligation to create a way to reach the truth in all these cases, to punish those responsible, and to end this evident impunity that exists in the cases.”