Miguel Henrique Otero, president and editor of veteran Venezuelan newspaper El Nacional, said the publication will take its case to international bodies following a $13.3 million legal sentence against it.

“Of course we are going to go to the international bodies that deal with these issues of freedom of expression, the Inter-American system, the United Nations, the European Parliament, we are going to fight in these bodies with all the arguments we have, which are the truth,” Otero told LatAm Journalism Review (LJR).

On April 16, the Venezuelan Civil Cassation Chamber of the Supreme Tribunal ordered El Nacional to pay compensation to the vice president of the United Socialist Party of Venezuela (PSUV), Diosdado Cabello, considered the number two of Chavismo, for moral damage and defamation. The stipulated amount of 237,000 petros (Venezuelan state cryptocurrency) is equivalent to about US $13.3 million dollars.

Cabello went to court in 2015 against El Nacional and against Venezuelan digital media such as Tal Cual and La Patilla, for having republished information originally published by the Spanish newspaper ABC.

According to the ABC report, Cabello's former security chief, Leamsy Salazar, allegedly accused the Chavista leader of having links with drug trafficking, shortly after deserting and taking refuge in the United States. ABC's investigation was replicated by more than 80 international news outlets and agencies, according to an editorial by El Nacional. At the time, Cabello denied any involvement with drug trafficking. 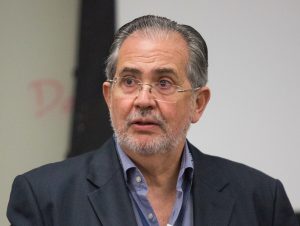 Carlos Jornet, president of the Commission for Freedom of the Press and Information of the IAPA (Inter-American Press Society), said that republishing content from another media outlet should be banal.

“In any democratic country, reflecting an accusation of this nature is part of the usual journalistic task; in Venezuela these days, it is the prelude to hell," he told LJR.

Otero, exiled in Spain, said that republishing information from another outlet would never be a reason for defamation lawsuits "In any country in the world that has the rule of law." He further stated that subsequent events confirmed the content of ABC's report.

“The worst thing about this case is that the article said that Diosdado Cabello was being investigated for drug trafficking by a New York State prosecutor, a federal prosecutor. He said that was a lie, but what happened three years later is that the DEA made an indictment and the DEA mounted a reward of 10 million dollars on the head of Diosdado. If anything shows that this investigation was being done, it is what happened after the DEA decision,” Otero said.

For Jornet, the regime seeks, with the sentence, to send a message to the rest of the independent media, which “struggle to survive in a country that long ago put aside all hints of institutionality.” “The message is: do not even dare to report on an accusation against the regime, because the full weight of the state apparatus will fall on you. The damage to freedoms of the press and expression is therefore enormous. And maybe irreversible,” he said.

The lawsuit against Tal Cual, which was also brought to court for publishing the same information, is still ongoing, Tal Cual editor-in-chief Víctor Amaya told LJR. “TalCual's legal team works tirelessly so that there is justice and respect for press freedom,” he said.

According to him, journalists of the digital outlet regret the sentence against El Nacional, but are not intimidated. “We continue with the spirit of doing good journalism and fulfilling our responsibility. News like these does not deter us, but rather propels us,” said Amaya, who added that the institutions are being used “to deepen censorship and self-censorship.”

Jornet said that supporting El Nacional right now is defending “the last remnants of press freedom” in the country. “El Nacional is a reference in the Venezuelan press, which will be 77 years old in August of this year. It has been three years since it had to suspend its print editions, due to the recurring obstacles to importing newspaper and other supplies, as happened to all media that did not align with Chavismo and which today represent this ideology,” he said. 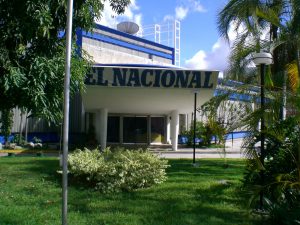 The newspaper stopped circulating in its printed version in 2018, after facing a series of persecutions and difficulties in accessing newsprint.

For Otero, the lawsuit is part of a long history of aggressions against the newspaper, which culminates in the transfer of ownership to Cabello.

“Once they put a bomb on us. The one who planted the bomb was caught and released. Other times the colectivos, which are the paramilitaries that work with the government, have come to attack us, paint our walls, insult us, call us, threaten us. We have also been subjected to different trials, where the courts operate as the legal arm of the Executive, there is no kind of independence of powers. They also prevented us from buying newsprint to print the newspaper, therefore, the newspaper for three years has been an online newspaper,” he said.

The US $13.3 million indemnity could have serious implications for El Nacional. In an interview with Reuters, the newspaper's lawyer, Juan Garantón, said that "it is an astronomical sum" and that "there is no way" to pay for it. The lawyer, who asked for a clarification from the court, says the sentence does not explain how the amount was determined.

Otero also reinforced that there are no resources to settle the indemnity and, therefore, the newspaper may be forced to surrender its headquarters as part of the payment. “If the sentence is executed, they are going to collect the money from us, we do not have the money, so they seize and deliver everything to Diosdado Cabello, as a substitution for the amount they assigned.”

Despite this, Otero said in an interview with Colombian station NTN24 that the outlet will not close. “I don't think El Nacional is going to disappear, El Nacional is a website. The facilities and the press will disappear, but we will continue to report. [...] And at the end we will publish the headline 'Venezuela returns to democracy.’”

Jornet, of the IAPA, says that the sentence is "clearly exploitative," and not an expropriation, which would be the transfer of a property to the State. In that case, the newspaper will pass into the hands of an individual, a leader of the ruling party. "Diosdado Cabello seeks to appropriate the newspaper (in fact, he said it expressly, and announced it, with a hint of insane irony, that he would donate the building to create a University of Communication).”

On several occasions, Cabello said that the El Nacional facilities would be transformed into an "International Communication University." He also went so far as to say, in irony, in 2018, that he would change the name of the newspaper to "The Wall Street Furrial, The Furrial Times," in honor of his hometown, El Furrial.

Regarding this threat to transform the newspaper into a university, Otero said that in fact it can happen, if they execute the sentence. “Well, really, the journalism that they would teach would be terrible journalism. I don't think that those who are going to train there, if they train them at all, will be able to practice journalism anywhere.”

Otero agreed that this is not a normal expropriation of the Venezuelan government. He called the action a “personal confiscation” of Cabello. “He can do whatever he wants with it, he says he is going to make a newspaper, he has shown a front page, there is a press there that I imagine he intends to use.”

Jornet added that, in order to understand how absurd the amount of compensation is, it is necessary to consider the economic context of Venezuela.

"A state employee in that country earns less than five dollars a month, and the average salary of public and private workers is about 50 dollars (the calculations are all approximate, because the national currency and the statistical system practically disappeared). [ ...] If Cabello considers himself a public servant and believes that the salaries they receive are adequate to cover their needs, he can rest assured that he will be able to live 225,000 years, or 2,250 centuries [with the indemnity's money],” he said.

The executive director of the Venezuelan Press and Society Institute (IPYS), Marianela Balbi, told LJR that the sentence is unprecedented in the country, “due to the disproportionality of the fine applied with the clear intention of confiscating the media's assets.”

Balbi stressed that the honor of a public official, who must be subjected to public scrutiny, cannot be placed above the right of society to be informed. In addition, the case shows, according to her, an instrumentalization of the judicial system.

“The use of the framework of courts, of a judicial system totally co-opted by the executive branch and key figures of the Venezuelan government, to engage in trials and cases against journalists and media without any possibility that they can face a trial on equal terms. For that reason there are several journalists in exile,” Balbi said.

Entities defending freedoms of the press and expression have classified the legal sentence as "judicial harassment," "judicial aberration" and an "act of revenge."

Representatives of the Committee to Protect Journalists (CPJ), the Inter-American Press Association (IAPA), Human Rights Watch (HRW) and the National Association of Journalists of Venezuela (CNP, for its acronym in Spanish) have spoken out against the court’s decision, the most recent in a series of attacks by the Venezuelan regime against the press.

In an article, Central and South America Program Coordinator for CPJ, Natalie Southwick, said that the indemnity is “exorbitant” and “seeks to further punish the daily for its independent coverage and sends a chilling message to other media outlets.”

“This is a clear case of judicial harassment against one of the few remaining independent outlets in Venezuela, which has managed to keep reporting against all odds,” Southwick said.

IAPA called the sentence a “serious outrage against freedom of the press,” “a judicial aberration and an act of revenge.” Association president Jorge Canahuati said the decision was not surprising “in a country where there is no institutional independence, the Judiciary is subject to political power.”

Through Twitter, José Miguel Vivanco, director of HRW’s Americas division, also condemned the decision. “This assault on freedom of expression merits individual sanctions against those responsible, including the ‘judges’ of the Supreme Court who signed this obscene [document].”

The president of CNP, Tinedo Guía, said in a video that the regime continues to try to criminalize journalists for their work of informing, "a public service.”

"The truth is the favorite victim of autocrats, of those who claim to be leaders without being one, without legitimacy of origin,” he said. “Consequently, every journalist who seeks the truth of the news faces the attacks of those who want to hide it.”