Mujeres Referentes, the Venezuelan journalistic project that aims to increase voices of women and non-binary people in news media

Ending the excuses for not including expert voices of women and non-binary people in journalistic texts from Venezuela. This is the main objective of the recently launched project Mujeres Referentes, which was developed by Alianza Rebelde (made up of media outlets Runrun.es, El Pitazo and Tal Cual) and Chicas Poderosas Venezuela.

Mujeres Referentes has its beginnings in a workshop on content production with a gender perspective that journalists from the three media received from the nonpprofits Avesa and Aliadas en Cadena in May 2019. As a result of the workshop, the Alianza Rebelde media created guide to produce reports that were free of any form of discrimination against women. 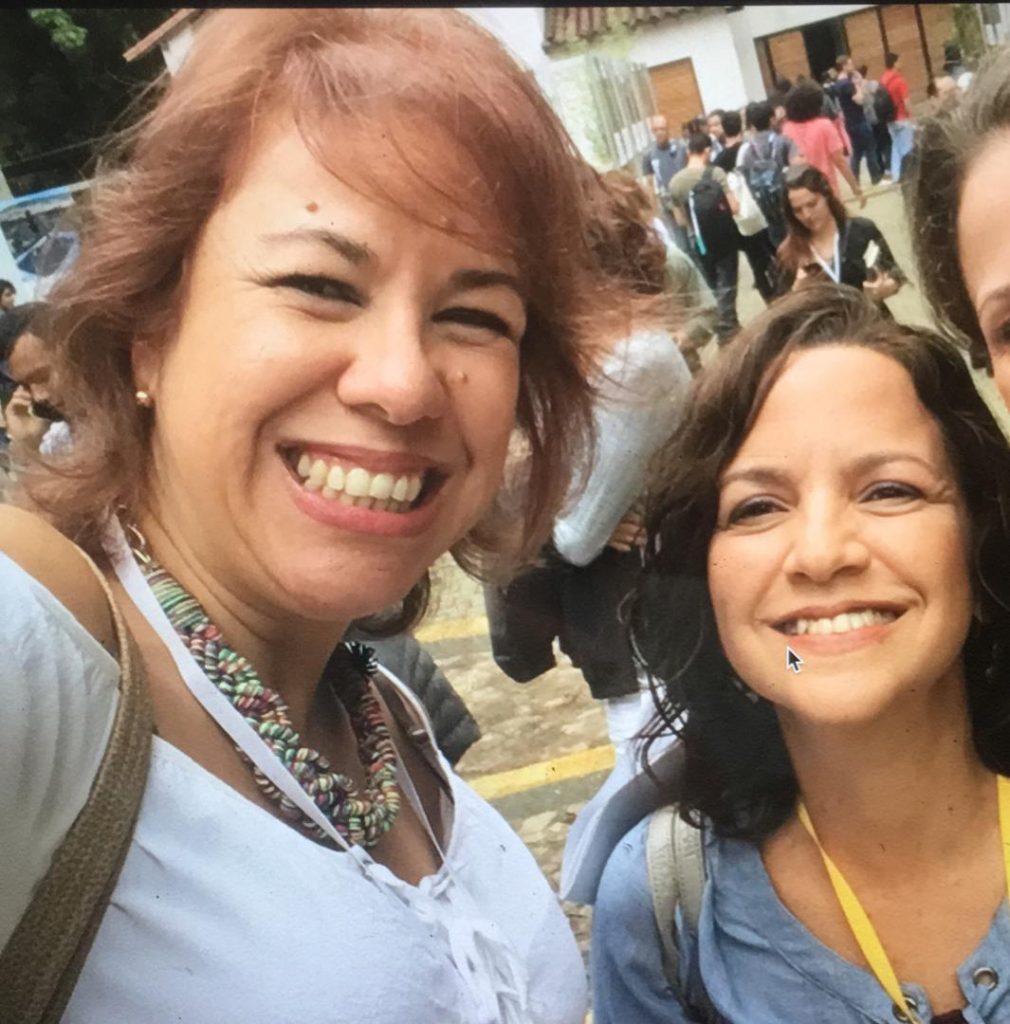 In order to answer this point, she together with Yelitza Linares, strategy and business manager of El Pitazo, decided to create a document in Google Drive in which everyone would include their sources who were women and non-binary people.

"We assumed that with each one, the contribution that each one of the journalists would make, we would make a directory much greater and more enriching for our media," Riera said.

However, due to the "information vortex" in Venezuela, the project was not rigorously monitored, Riera explained. In 2020, with the arrival of the COVID-19 pandemic and the increase in editorial meetings via Zoom, Riera realized that one of Runrun.es’ sections in particular was missing the voice of women. The section, Tres por Tres, asks three people who are experts in a specific area the same three questions. Riera began to notice that the speakers were almost always men.

"'And what happened? Why do we only have men speaking here? Don't we have female specialists?'” Riera asked her colleagues. Together with Linares, they understood that they had to resume the project. The two journalists, in addition to belonging to the media that are part of the Rebel Alliance, are both ambassadors of Chicas Poderosas in their country.

That was nine months ago. From there, they began the process of strengthening the databases, reviewing sources and confirming participation in the project.

According to Riera, the database was mainly fed with journalists' sources and in some cases with information from some nonprofits. For Linares, the fact that it is a project that comes from the media and journalists themselves gives relevance to the project.

“El Pitazo is a media outlet. In the Alliance, it has more correspondents, especially in the regions. And it was also a way of giving visibility to those women who are also in the regions, because the media are often very centralist when it comes to giving information, especially when it is very specialized,” Linares told LJR. “So, this was very good, many of the women journalists and men also felt called by this and provided contacts. Somehow they feel that this database is theirs, too.”

“For us, the validity of that person as a source and that they have the skills for that is important. That is to say, that it is a person with a professional career, who has had contributions to society, to the country, either through investigations, either because of the position they have held, or because of the creation of nonprofits or the defense of human rights, that is, each one of these women or non-binary people who are in the directory are approved by us in that sense,” Riera explained. "They have to be women and non-binary people with proven abilities there in different areas.”

Upon review, the database had a list of 300 women and non-binary individuals. Emails were sent to those contacts explaining the project and asking for their authorization to be there: one of the particulars of Mujeres Referentes.

The project went public with a total of 207 women. Some of the people contacted did not respond to the email or would not participate, in some cases because they considered that they did not have time to respond to requests from journalists. Linares, however, thinks that in some cases there might be some reluctance on the part of some women to recognize themselves as references, something she has seen since she was an editor at the newspaper El Nacional. 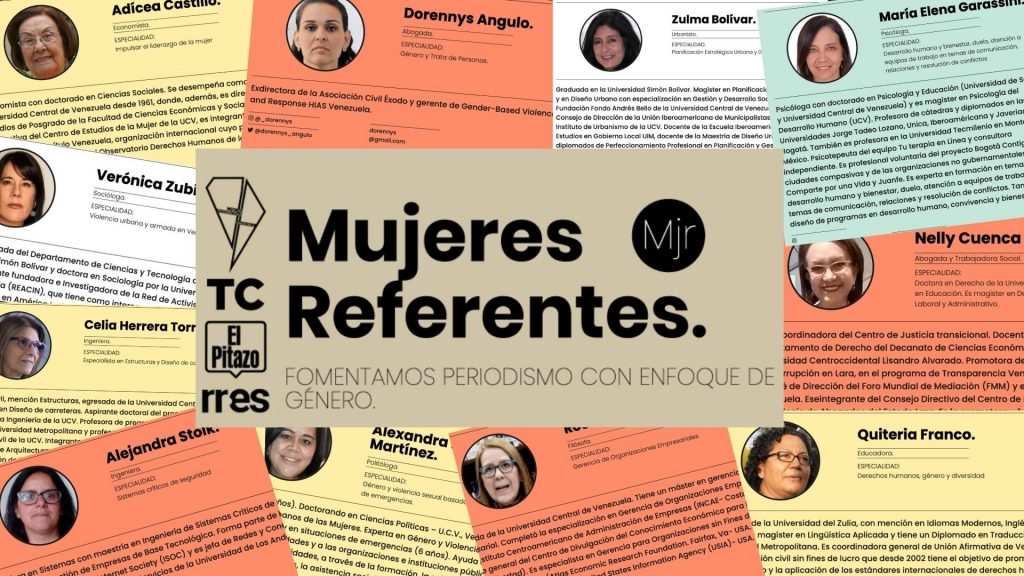 “Our team was made up of women and it was a struggle, it was difficult for us to get women as spokespersons. And we were always clear about this [about] women: it is hard, until we are one hundred percent convinced that we can talk about a topic, we do not show ourselves. We don't offer ourselves,” Linares said. “And it's silly, but it does seem that men [perhaps] with less command of a subject dare more. It takes us a little more to dare. I do not know if it is a cultural learning or if it is a generalization, what I am saying. But that may be a reason.”

Linares also identifies the various roles that on many occasions women carry out both professionally and personally that make it more difficult to "make our work visible." That is why she is convinced that perhaps a second phase of the project will focus on training women as spokespersons, in front of the cameras.

"Why not do it? Why not let us women be the ones who can do it if with certain issues or in certain areas we are the most prepared people or as well prepared as other colleagues,” she said.

Mujeres Referentes is then a first attempt to give rise to that spokesperson. One of the people who are part of the project is Zulma Bolívar, an urban planner specializing in Strategic Urban Planning and Urban Design. For her, the project helps to heal that "global debt" that public policies have in incorporating the gender perspective since it allows a record of women who have worked for a better Venezuela and who have made history.

"Personally, it fills me with immense pride, knowing that my name was included, along with those women whom I admire and who have been milestones in my life," Bolívar told LJR. “Professionally, I share space with many other women urban planners who have dedicated their lives to building the city and citizenry. Urban planning is presented as an opportunity to build more just, efficient and sustainable spaces and its implementation with a gender perspective helps us to incorporate the vision, needs and problems of the entire population, without discrimination of age or sex, allowing all of us to have the same Right to the City.”

For Bolívar, this right to the city is undoubtedly linked to citizen participation and the full exercise of powers and power to lead. In that sense, Mujeres Referentes empowers the political participation of women, as she explained. "It is a means to strengthen their voices and generate spaces and resources for common agendas that could contribute to improving living conditions with greater equality," she said.

Now that it has been officially launched, the page is open for applications that other journalists or anyone else want to make. The idea is to be able to grow the database.

“But as we said from the first moment of the launch, this is collaborative. Just as journalists from the three media collaborated in the beginning, now we request the collaboration of society, of other colleagues, because this is precisely for all journalists, for all media, including researchers, students, organizers of forum,” Riera said.

A call that has already been received, as of last week they had received 180 applications. In fact, since the project was launched on June 6, they’ve seen support for the project on social media. In particular, the nonprofits that have women from their teams as Mujeres Referentes have shown their appreciation for the portal.

“The same women [show] gratitude and at the same time a responsibility. Theyknow the goal is precisely to have more diverse voices, for there to be a plurality in terms of information, and that is why they celebrate it. Even the School of Social Communication of the Andrés Bello Catholic University also referred in a Tweet to the importance of having this directory. I think it has been very well received,” Riera said. 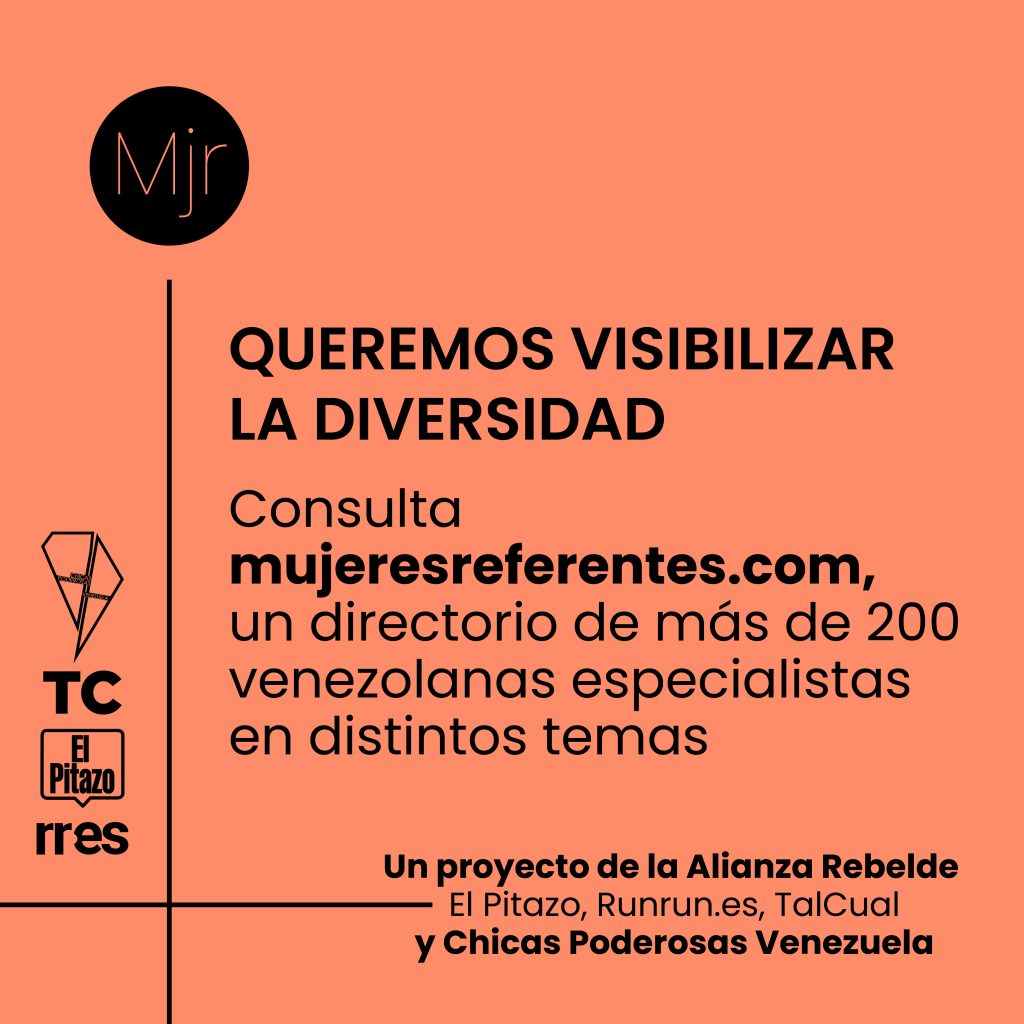 Currently, the directory has people spanning a spectrum of 35 professions. And of the total, there are 40 lawyers, followed by psychologists (27) and communicators (25). Of the 207 people in the directory, 35 of them have double degrees, and of course, many of them have postgraduate, Master and Doctorate degrees.

The challenge now and most importantly, for the co-creators of the project, is to get people to use the database.

“I think this is the great challenge. That the database be used and hopefully many more Venezuelans can join. Not only those that are inside, but those that are outside Venezuela, because Venezuela has lost very valuable talent in recent years as a result of the crisis. And it seems to me that this is a way for us to rescue those references that we have lost,” Linares said.