It was Jan.18, 2010 when Mexican investigative journalist Adela Navarro learned for the first time that someone wanted to kill her. She was not the only one at risk according to the information she received: the general editor and co-director of Semanario Zeta in Tijuana, the media outlet that Navarro has co-directed since 2006, were also threatened. 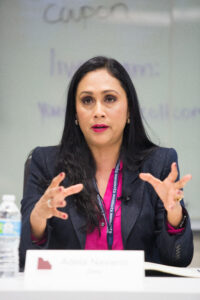 The information first generated a real discomfort: “Why don't they let us work?” And then she felt a deep frustration: “How can you live in a country with so much impunity, without guarantees to exercise freedom of the press, of expression, of thought? How is it possible that criminals, in their impunity, threaten us?” as she narrated in a Ted Talk.

Despite the fact that the threat could be a reality – two directors and a journalist from Semanario Zeta had been assassinated and another survived an attack – she decided she should continue with journalism. She doesn’t want to be a martyr, because she does not believe that any story is worth life, but she is convinced that journalism is necessary to make a more mature society capable of making better decisions.

She does not regret that decision despite the difficulty of practicing journalism in Mexico, not even when she had to live 24 hours a day with bodyguards. It has also brought her special recognition, such as when she received the International Press Freedom Award from the Committee to Protect Journalists (CPJ) or the Courage in Journalism Award from the International Women's Media Foundation (IWMF). But, she especially values when her work has tangible effects: such as when investigations are opened against corrupt public officials exposed by the weekly or when drug traffickers have to leave her region.

On the night of Oct. 12, she received the Maria Moors Cabot Prize, which for the first time in history was given entirely to women journalists. This is the second Cabot Prize received by Semanario Zeta, which for Navarro is even more significant because it “tells us that as a media outlet, as a team of journalists, we continue on the path of defending free expression, of carrying out investigative journalism, which motivates us to continue with it.”

The journalist spoke with LatAm Journalism Review (LJR) about her ideals when starting in journalism, how she achieved them in these 31 years of professional life and about her tireless fight for freedom of expression and of the press in one of the most dangerous countries for practicing journalism.

LatAm Journalism Review (LJR): As you finished your school years, you once thought of studying law and becoming a lawyer as a way to help other people and fight injustice. However, in the end you decided to become a journalist. What led you to make that decision? Do you think you have been able to meet the expectations you had when you decided?

Adela Navarro: In those years, at the end of the eighties, lawyers, in fact the profession that then came to power, were very discredited, associated with corruption, and I did not want to be linked to an environment of corruption and impunity. I found that in journalism I could merge my two great passions: helping people who are victims of abuse of power, and writing. Narrating injustices to achieve justice.

In 31 years practicing journalism independently, pondering investigative journalism, freely, with no more commitment than the one we have with society, to report, I can say that that expectation of my years as a young adult has been fulfilled. Through journalism, from ZETA, we have supported the causes of society, contributed to democracy, to security, to justice, to the rule of law, through journalistic investigations, reports, which show the excesses of power, corruption, abuses, complicity and breaking the law.

LJR: Mexico has been classified as one of the most dangerous countries to practice journalism. You and the media outlet you direct have not been strangers to this situation: murders, threats and attacks have been part of your life for years. What does it mean for you to be a journalist in Mexico and how do you see the future of the profession in the country?

AN: We certainly live in a lawless state, where impunity and illegality prevail. Where the rule of law is a demand and not a reality. With governments that are lazy, incapable, sometimes accomplices of the criminal forces, or with ties to corruption. These are the main reasons why Mexico is a risky country for the exercise of journalism, conditions that generate impunity for the aggressors of journalists and the media.

Regardless of this hostile context, we at ZETA continue to exercise freedom of expression, conducting investigative journalism, every week and every day in our media, the printed weekly and our website. It has not been easy, in some moments of our professional life, we have had to be protected by bodyguards against criminal threats from drug trafficking, and in others, we have denounced publicly and in official sources like the state commission on human rights, the pressure from local governments, which involve verbal aggression. In 2020 alone, Article 19 counted 16 verbal attacks by the governor of Baja California, and his team, against ZETA and its director.

I see that in the future, as it is today, investigative journalism will be vital to show corruption in governments in Mexico, and to show what happens with the objective of reducing impunity, that government investigations arise from journalistic investigations, like as happened for example with the Casa Blanca case in the past, and now with the Pandora Papers case.

Having awarded the Nobel Peace Prize to two journalists in the 2021 edition, I think it is a great endorsement from the academy of freedom of expression and journalists, making visible the importance of the exercise of investigative journalism to contribute to security , to the rule of law, to the fight against corruption, and to peace.

LJR: Despite this difficult situation to practice journalism in Mexico, you have said that it has been worth it because thanks to that work, society is not only better informed but also more mature. What stories that you've done or directed do you particularly remember as "worthwhile," to use your expression?

AN: Don Jesús Blancornelas, founder of ZETA, used to say, no story is worth it if a life is taken from us. But those of us who have been in charge of the newspaper since 2006, understand that continuing with this project of freedom of expression, despite three murders, also means a tribute to our murdered colleagues: Héctor Félix Miranda in 1988, Luis Valero in 1997, when Don Jesús himself survived an attack, and Francisco Javier Ortiz Franco, murdered in 2004.

Our commitment is with them, with freedom of expression, with journalism and with the society we serve by providing them with information.

We have highlighted that at ZETA we do journalism that is investigative, critical, analytical and rebellious, in many cases, we publish names and images of those who, from drug trafficking and enjoying impunity, lacerate society, not only with the sale and distribution of drugs, also with murder, abduction and extortion, among other crimes. By publishing their names and faces in the pages of the weekly, we have seen that they are sought by the authorities that protected them, or that they move out of state when they are shown and their identity is revealed

Similarly, on the issue of corruption, in 2019 for example, when the current government had only recently taken office, we published a report on the corruption that was taking place, as a result of the publication of ZETA, two of the aforementioned officials were fired, and an investigation was opened in the state attorney general’s office, which has remained frozen over the years, but that is evidence of another level of complicity between the Mexican authorities, which we also describe based on investigations.

In each election, whether local or federal, or both when it happens, we interview each and every one of the candidates for high office of popular election, giving the reader the opportunity to meet them all and make the decision to vote. Something as simple as this, unfortunately does not happen in other media, where economic or political interests tend to influence the editorial line of the media outlet.

LJR: In a Ted Talk, you said that the weekly Zeta and you all manage to survive thanks to readers and organizations that promote press freedom. Do you still think that more support is needed from the international community to help journalists and that society needs to feel hurt a little more when journalists are killed?

AN: I definitely think so. It is necessary for society to be more involved with its media, and for national or international organizations for the protection and defense of journalists to locate those who, in some remote place, are being pressured by powerful entities, such as officials, governments, state powers, or criminals, mafias, drug cartels. Sometimes we do not look back at what is happening in other states or countries, and there are fellow journalists who are suffering repression.

We journalists have, as one of our commitments, to serve our society and raise awareness about the work that the exercise of free expression means, particularly in hostile political climates, since killing a journalist, silencing a journalist, censoring him, affects the society as a whole and benefits an entity of power that tries, with the brutality of force, to hide information.

LJR: This year, all the Cabot Prizes were given to women. What particular challenges have you experienced as a female journalist in Latin America in general and in Mexico in particular? Is, for example, the violence particularly serious/strong against women journalists?

AN: Particularly in these times of insecurity, and excesses from governmental authority, gender violence has increased. Men, generally the heads of governments, use that unequal, misogynistic language, in an attempt to denigrate a female journalist, to hurt her credibility with her readers.

It is a matter of pride that this year, four women have been selected as recipients of the Maria Moors Cabot of Columbia University, and a fact of inspiration for young women who are starting in the exciting profession of journalism.

LJR: You have to your credit a long list of awards and recognitions not only for your journalistic work but for your courage in doing so under the particular conditions of Mexico. What does this particular award mean to you?

AN: It represents a great emotion, indescribable for someone who works with words. It fills me with great pride, especially because at ZETA, it will be the second Maria Moors Cabot, since Don Jesús Blancornelas received it in 1998, which tells us that as a media outlet, as a team of journalists, we continue on the path of defending free expression, of carrying out investigative journalism, which motivates us to continue with it.

In addition, it means for all of us, the support of the most prestigious university in journalism in America and the world, which makes us feel that we are not alone in this fight for the defense of freedom of expression and the exercise of investigative journalism, rather, there is, in this case, an academic institution that supports us from beyond our borders.