A Venezuelan journalist who previously fled his country because of threats is now in a military prison facing multiple charges rejected by press freedom advocates. 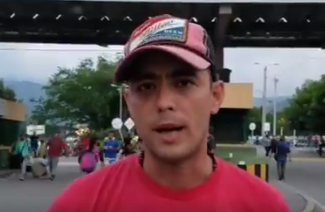 Venezuelan journalist Jesús Medina was sent to the Ramo Verde military prison by a court in the Venezuelan capital. At a hearing on Aug. 31, the 13th Court of Control of Caracas admitted a legal process against Medina over charges of laundering, criminal association, incitement to hatred and obtaining illegal profit against acts of public administration, El Nacional reported.

Medina was detained on Aug. 29 by agents of the National Anti-Corruption Police, El Nacional reported. The agents approached Medina at at a subway station in Caracas, as reported by a Peruvian journalist who was with the Venezuelan and witnessed the detention. In a video published by Venezuela's National Union of Press Workers (SNTP, for its initials in Spanish), journalist Juana Avellaneda said that Medina was helping her and a colleague with an investigative report in Caracas.

Medina, Avellaneda and the other Peruvian journalist were waiting for the subway when, according to her, "armed men appeared, one aimed directly at [Medina's] head, identified him and asked if he knew us." The Venezuelan journalist said he did not know the Peruvians, "because he knew that if he said yes, we would be jailed with him today," Avellaneda said.

Attorney María Fernanda Torres of the Venezuelan human rights organization Foro Penal rejected Medina’s detention in the military prison. "Let us remember that Ramo Verde is the national center for military defendants. So, we talk about there being a civilian journalist who was processed in an ordinary court, but who is being held in a jail for military defendants,” she told El Nacional.

Torres, who is part of Medina’s defense team, said that in relation to the crime of inciting hatred, the process refers to content the journalist publishes on his social networks. "We must remember that Jesús is a reporter and his social network is his means of communication and what he publishes in them is for personal use," Torres said.

Edison Lanza, Special Rapporteur for Freedom of Expression of the Inter-American Commission on Human Rights (IACHR), wrote on Twitter that Medina was being charged with the “vague figure of money laundering, just as they did with Braulio Jatar when he bothered them. They criminalize journalism.”

Jatar, director of website Reporte Confidencial, was in jail on charges of money laundering for almost nine months. However, his family and human rights organizations said this was in retaliation for a video of a citizen protest against President Nicolás Maduro that was published on the site.

Freedom of expression organization IPYS Venezuela expressed concern about the charges against Medina, “whose sanctions include penalties of up to 20 years imprisonment.”

“So its application only seeks to censor media and their workers, in addition to representing a contradiction with international standards in terms of freedom of expression and access to public information,” the organization wrote.

Previously, Medina was detained by Venezuelan authorities in October 2017 while reporting at the Aragua Penitentiary Center, known as the Tocorón prison. He and two foreign journalists investigated inmates' alleged access to firearms, drugs and "luxuries," such as a swimming pool, motorcycles and satellite TV, inside the prison.

According to a report published at the time by El País, the detention of the professionals took place after prison authorities learned that Medina works for the site Dolar Today. The newspaper explained that the site, which is blocked by the Venezuelan government, reports on the black market exchange rate of currencies and publishes articles "contrary to the chavista regime."

In November, a month after his arrest, Medina went missing for two days and, upon reappearance, said he had been abducted, tortured and threatened with death. He also said he did not know whether the people who abducted him belonged to political forces, armed forces or organized crime.

A few weeks later, Medina left Venezuela and explained that he would spend some time in Colombia because of threats against him and his family due to his work. He accused the government of Venezuelan President Nicolás Maduro of "persecution" and said that the Bolivarian National Intelligence Service (Sebin) and Diosdado Cabello, a chavista leader and deputy in the National Constituent Assembly, were responsible for the alleged abduction and threats he had been receiving.

At the time, he said in an interview with Efe that he would seek international protection and would soon return to Venezuela. On Feb. 7, he posted to Twitter that he returned to his country.