For Brazilian journalist André Biernath, from BBC Brazil, the impact of disinformation in the midst of the COVID-19 pandemic can be seen in that even before the World Health Organization (WHO) declared it a pandemic, it was already talking about an “infodemic.”

“It is symbolic and it is very important to understand the moment in which we live,” Biernath said during the 14th Ibero-American Colloquium of Digital Journalism during the panel “Challenges in the coverage of the pandemic in Ibero-America amid the ‘infodemic,’ the epidemic of disinformation.”

The panel, which was moderated by Belén Zapata, presenter of Channel 44 of the University of Guadalajara (Mexico), and in addition to Biernath, was paneled by Argentine scientific journalist Federico Kukso; Spanish journalist Ana Tudela and Portuguese journalist Catarina Carvalho.

Biernath stressed that the management of the pandemic in Brazil has been difficult due to the contradictory messages from authorities. According to the journalist, while some authorities published messages against the use of masks, social distancing and even gave false information, citizens heard another message from the person coordinating the fight against the pandemic in the country.

"If people do not receive the communication and do not understand the importance of the necessary measures at the moment to contain the crisis, it is impossible to face it," Biernath recalled that the coordinator of Doctors Without Borders in Brazil told him.

Kukso wanted to highlight six points that for him have marked coverage of the pandemic in the midst of the infodemic. Among them is what he called the "information maelstrom" that includes a scientific hyperproduction. According to him, journalists who had not covered science were not familiar with "preprints" or the importance of retractions in the scientific field. “[They didn't know] the importance of communicating to the public what the process of doing science is like. Maybe the evidence will change in a few months,” he explained.

The Argentine journalist also mentioned as a challenge the need to give good news and to be careful when giving the results of an investigation. He also pointed out the bad practice of many communicators on the subject. He pointed as an example to communicators who in front of a camera took products that were harmful to health, who invited anti-vaccine proponents to their programs or who did not know the difference between a virus and a bacterium.

Finally, Kukso pointed out that it is not possible to talk about quality in journalism without talking about the working conditions of journalists. “Many times it is very difficult to work with quality if you have five or six jobs at the same time. In the field of journalism, in the previous sessions, there is a lot of talk about innovation, technology, and machine learning, but little is said about how poorly paid journalists are in Latin America. This economic situation often affects how a subject is reported on.”

Although Catarina Carvalho, co-founder of A Mensagem, agreed with Kukso in the bad practice of some journalists, she considered that in general in Portugal, a good job was done so that disinformation did not gain as much ground in the country. She said that, for example, unlike other countries, the authorities there did not give much room to disinformation and, on the contrary, tried to be as clear as possible.

"The Portuguese authorities have managed to transmit the correct information," Carvalho said, noting that 90 percent of the people in the country want to be vaccinated. However, she did say that there was a problem with reopening the economy a bit quickly, which caused the third wave to arrive earlier than in any European country.

“But I would say that the overall balance is that we are in a fairly calm situation. The government has reopened, and that 9 out of 10 people want to get vaccinated says a lot," she said. "The infodemic did not win here."

For Ana Tudela, co-founder of Datadista, the pandemic was a good moment for journalists and media to regain the trust of the audience. According to Tudela, what the Datadista team tried to do when covering the pandemic is what it usually does: interpret and work with large databases in order to make it more "friendly" to people.

However, Tudela pointed out that the “avalanche” of information from authorities was very great: daily press conferences, newsletters, publications on social networks, and so on. To this was added that the daily data related to COVID-19 came in PDF. “It is a case that seems like a lie in the 21st century. PDF is the anti-informative format when we are talking about data,” Tudela said.

The Datadista team decided to use tools for data extraction in a semi-automated way that allows them to currently have 60 accessible and reusable databases that are used by their subscribers. "One of our pride is that scientists have used it because they have nowhere else to turn," Tudela said. 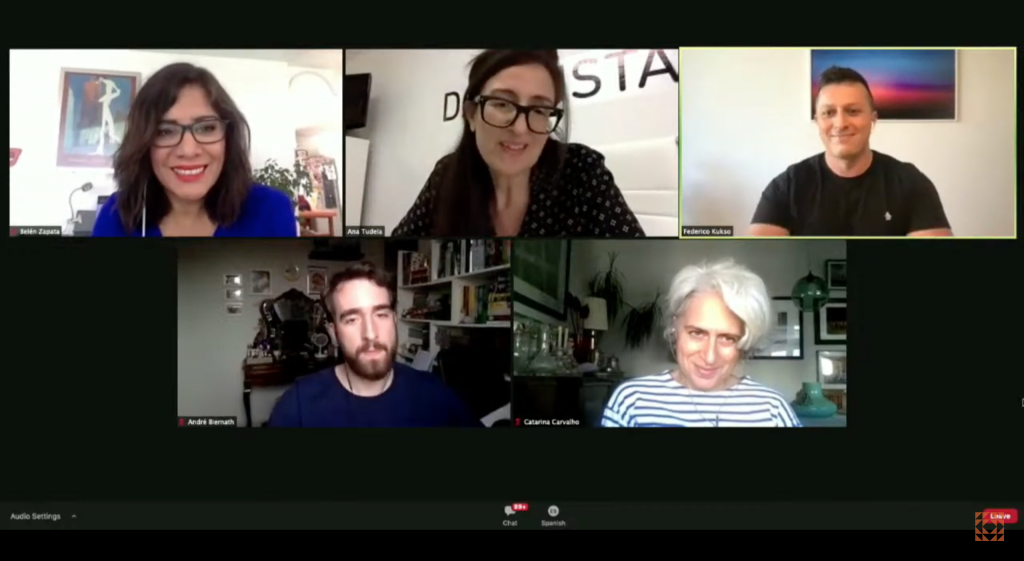 For her part, Belén Zapata explained her experience with the program "Coronavirus, the pandemic,” launched by the University of Guadalajara channel as an example of what the academy has done to help combat disinformation. According to Zapata, the program was planned for two weeks and they have been going on for more than a year, and it is still not clear how long it will last.

The goal of the program has always been to prevent contracting the disease and avoid the greatest number of deaths. Currently, the program is also seen in other countries such as Colombia, Guatemala, Honduras, Chile, among others; and it has alliances with channels and agencies such as EFE and DW.

One of the questions that generated a more forceful response from the speakers was related to giving a voice to anti-vaccine proponents and if it was not framed in the right to freedom of expression. Kukso, the most emphatic in responding, pointed out that journalists must get out of the false dichotomy of journalists to give a voice to all sides.

"There is a confusion. There is an old-fashioned journalism custom of the so-called two camps. There are issues for which there are not two sides. It's like saying I'm for gravity and I'm against gravity,” Kukso said. “When a person, an anti-vaccine doctor who goes against all the scientific evidence of decades comes out to say that vaccines are poison, it is a crime, it is a danger to public health. […] The role of the journalist is not to go out to be, as someone said, Big Brother, it is to inform, tell the story, keep society informed. The journalist has to get out of that false dichotomy of the two sides.”

Among the other topics discussed was the need to have more science journalists on the media payroll (with or without a pandemic), the lack of transparency in vaccine contracts that led to more disinformation around them, how to continue reporting to despite the lies issued by governments themselves, and the hoarding of vaccines by developed countries.

To view mini-biographies of the speakers, click here. You can watch videos of the entire Colloquium in Spanish and Portuguese. The annual meeting, traditionally held after the International Symposium on Online Journalism (ISOJ), is organized by the Knight Center for Journalism in the Americas with the support of the Google News Initiative.