Podcasts aren’t going anywhere. That seems to be an indisputable fact these days. 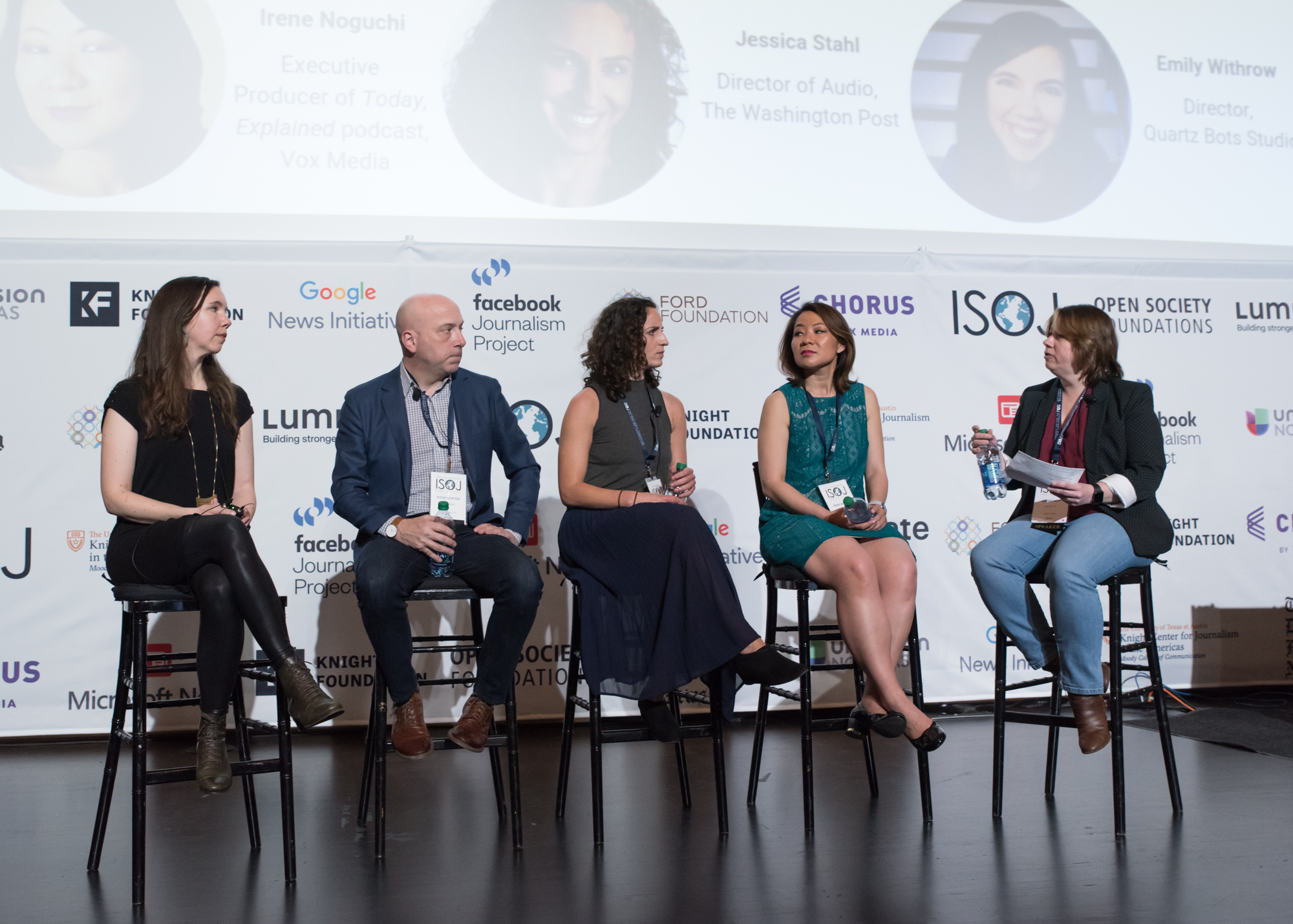 There are more than 660,000 podcasts available today, with over half of the U.S. population stating that they listen to podcasts regularly and relatively frequently. And with those numbers, technology followed. The number of smart speaker owners grew about 78 percent just from 2016 to 2017.

These were the numbers that Debbie Hiott, general manager of Austin’s NPR station KUT, used to give a clear picture of the stakes involved when talking about the future of audio content. Hiott chaired the panel “Ok, Google, Alexa and Siri: Play the news. Can you really help journalism in the podcast boom?” at the International Symposium on Online Journalism (ISOJ) on April 12.

The urgency of this issue reminded Hiott when newspapers weren’t quick enough to pivot to digital. “This is that time for audio.”

That’s why ISOJ assembled the people behind some of the most prominent podcast productions today for this panel about the future of podcast journalism right on the verge of the voice assistant revolution of Siri, Google and Alexa.

Irene Noguchi, executive producer of “Today, Explained” started the presentations off with an explanation of how the daily Vox Media podcast developed its sound and feel. The team didn’t want a show that would feel like a lecture by a stuffy professor, but rather a drink at the bar with some friends.

"There's always that one friend you have in the crowd who knows how to explain things really clearly and he's moving around the salt and pepper shakers to explain how Brexit works," Noguchi said. "He makes it very clear, a lot of fun. And that's the feel that we really go for on our show."

She summarized their approached intro three main ideas. First, a podcast needs to craft a unique sound, making all subject matters light and accessible to listeners. Second, it needs to tap into listeners’ curiosity, using topics they are already curious about and explain them well. Third, producers need to experiment, even though it can be challenging. Noguchi suggested sound design and creative production ideas to keep listeners engaged even through boring subject matters.

For NBC News, audio production is both new and old. For years the network had been putting out “Showcasts,” which were basically audio versions of the its television shows. This shocked their incoming executive producer for audio and podcasts Steve Lickteig: “There’s no artistry or creativity there!”

Eventually he came around, acknowledging they had garnered over 18 million downloads using that approach. Lickteig now uses the resources NBC has to create a strategy for audio-first content. That includes leaning heavily on the NBC newsroom for its talent as well as hiring new people that focus on podcasts only. Together they re-work content, re-imagine visuals for audio and make use of the archives while also developing new formats.

Meanwhile over at The New York Times R&D group, Lead Kourtney Bitterly and her team have been trying to figure out how the advance of smart speakers will figure into the future of podcasts. “In our newsroom, we're really used to creating content, but with these smart speakers, we're essentially having to create entire user experiences as well,” she said.

Bitterly talked about trying to understand the potential of smart speakers beyond the basic uses they serve today. An interesting insight they garnered during this research was that people are trying to create boundaries for their technologies.

The potential mental health risks of smartphone use, already being covered today, could mean a big chance for audio content.

While many users suffer from news fatigue, “Audio actually felt like a break. It really kind of felt like it wasn't constrained by that same relationship that people had with the news," Bitterly said. "It just feels like smart people having a conversation."

But that in no way means that podcast producers have already figured out the perfect method. There is still a lot of room to experiment. She advises those in the audio sphere to adjust formats to people’s lives and design for shared consumption — for instance, parents listening with kids.

Emily Withrow, director of the Quartz Bot Studio, approaches smart speakers from an interactive perspective. They want to design narrative experiences for chat and audio, basically creating a story you can talk to.

“Imagine if you could have an intelligent conversation with the people who are writing the news, reporting the news. What does that look like? This has been an obsession of mine for a really long time," she said.

One of the main concerns in developing this kind of interactive audio is actually figuring out who the story is interacting with. “Great conversation design figures out who you are and speaks to you,” read one of her presentation slides.

This could also open up possibilities to “check in” with listeners, for example while baking bread. The smart speaker could enquire whether the yeast is taking effect by asking “Do you see bubbles?” If not, the listener will hear how to adjust the recipe.

What became clear during her presentation is that possibilities for interaction seem limitless, but Withrow suggests some guidelines:

Focus on the individual users (within reason) and figure out different approaches for them. Let go of the idea that there is one perfect way to tell a story. Figure out how to guide different users through the experience by gaming it out.

To those willing to “embrace the chaos,” Withdraw provided a free template to try and create an interactive audio experience, playboard-template.glitch.me.

A fairly new addition to the list of legacy media outlets joining the podcasting scene is The Washington Post. Jessica Stahl is the director of audio and has helped to grow the audio platform to its current stable of 14 original podcasts.

“[Smart speakers] are going to be in every device that we own,” Stahl said, which is why The Post is willing to invest in audio, including the technology and development behind podcasts.

Trying to figure out what would make its podcasts unique, The Post decided it would focus its journalism and depth of coverage not just on politics. But that decision alone doesn’t lead to success in audio.

“The way that I think about it...is that there is room for more things in the audio space. I think particularly room for journalism," Stahl said. "But there's not room for everything. There’s room for great things. And there's things that stand out."

Therefore the mission at The Post will be to have podcasts that are smart, different and true to its brand. Stahl also summarized what they hope to gain from their audiences into three key factors: “We want people to know us, love us and, then in this world of smart speakers and voice assistants, ask for us.”

Stahl concluded with a simple but poignant truth that applies to everything in journalism: “Make great things and make sure people know about those great things.”