To be able to schedule and talk for half an hour with a journalist, with a long track record, and receive advice from her about your professional future does not seem easy to get. However, it is currently possible thanks to mentorships from Women In The News Network (WINN).

It's as easy as visiting their website, going to the mentoring section and choosing among the 17 journalists and editors who offer their time to guide women from Latin America who are media professionals.

To request a mentorship, you ask for a free WINN membership and the system will take you to the mentor's calendar showing available days and times for the online call.

“WINN was born in 2018 as a network to promote digital innovation in the media. As part of my work at Accenture Argentina, I presented a study to 25 women journalists on how collaboration and technology could help reduce the salary gap between men and women. From that gathering, WINN emerged. We started by doing training, holding face-to-face (specifically in Argentina) and virtual meetings, giving scholarships on fact-checking and programming. At that time we launched a mentoring program, but it was not very successful,” Gabriela Oliván, founder of WINN, told LatAm Journalism Review (LJR).

“Looking back, we think the proposal was not well thought-out and the conversation topics were not well-defined. Plus, the network did not have the maturity it has today. Now, the network is made up of more than 3,200 journalists from all over the world. So, because we really believe in collaboration, in networking, we relaunched the mentoring part with a much more robust network and are trying to correct those initial 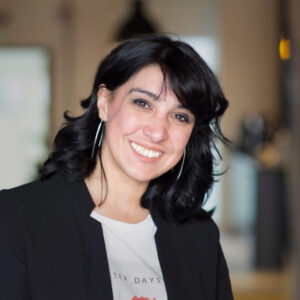 Gabriela Oliván is founder of WINN and a promoter of mentoring. (Photo: Courtesy)

The mentoring program was launched on Nov. 30, 2021 and, until this article’s publication, has carried out an average of 20 mentoring sessions of 30 minutes each.

The power of collaboration

The mentors at WINN are journalists from various Latin American countries: Argentina, Colombia, Chile, Mexico, and even England, and they work in high profile media such as BBC Mundo, La Nación de Argentina, El Mercurio, CNN, Forbes, among others.

All mentoring journalists participate collaboratively in the project and receive no remuneration. They were selected and invited to participate by the WINN Advisory Council.

Oliván deeply believes in the power of mentoring and, in addition to being WINN’s founder, she also volunteers her time as a mentor despite not practicing as a journalist herself. “I am convinced of the power of helping each other. I think it is the only way forward. But, in Latin America we don’t have this culture of mentoring. At WINN we are trying to make that cultural change,” Oliván said.

Oliván also said that, to date, she has carried out four mentorships and, in her case, most of the journalists are seeking her advice to make the leap from journalism to the corporate world, although this is not necessarily something that WINN seeks to promote.

Laura García, a Mexican journalist based in the United Kingdom who works for BBC Mundo, told LJR about her experience as a mentor. García had done three mentorships for WINN at the time of the interview, and she described her experience as positive.

In her case, she explained, the young women who sought her out did not arrive with a specific question, but many hold doubts about their professional path. “They have a lot of questions about whether they are doing the right thing, whether they are losing or running out of time, or whether or not they are making the right decision,” García said.

"Normally, we end up talking longer than half an hour, just for fun. At the end, both parties leave calmer, more relaxed, with more energy and a greater belief in our work," the journalist added.

Francis Peña is a Venezuelan multimedia journalist and learned about the mentorships through a colleague. She decided to make an appointment because, after taking a sabbatical from her job as a journalist, she is ready to strategize to get back to writing, sending articles to the media again, and building her own personal brand.

“My experience was super pleasant. My mentor was Laura García. I chose her because I see her career as an example of where I’d like to get to in the future and she works in the (multimedia) formats I’d like to continue exploring,” Peña told LJR.

Peña sees mentorships as an opportunity to get guidance from someone she admires and respects, and also to network. “I think it is an experience that was sorely lacking. Especially for Latina women who want to somehow ‘make it’ in the journalistic world. It is interesting to talk with people who have managed to surf a lot of the challenges that must be faced, being Latinas and women, in this field,” Peña said.

Mariel Lozada, deputy editor in Spanish for the Global Investigative Journalism Network (GIJN), also scheduled a WINN mentorship and agrees with Peña on the importance of having a guide and talking to someone with more experience within the profession.

“It’s always useful to talk to a journalist who is a couple of years older than you, because many times you tend to drown in a glass of water with problems that, over time, you realize are not that serious. Talking it out with another person gives you a different perspective. That's why I also say that mentoring was a kind of therapy,” Lozada told LJR.

Mentoring serves as therapy not only for those who receive it, but also for the mentors themselves.

“I am glad to be able to help someone regain her self-confidence. I know sometimes I’ve been missing it and other people have helped me find it again,” the journalist said.