In alignment with its goal of making effective the communication of journalistic content in Latin America, the third edition of the Latinográficas learning and collaboration program of the digital native news outlet El Surti, from Paraguay, will address the issue of misinformation and violence around climate change. It will also seek to train journalists, designers and illustrators to optimize the distribution of visual journalism on digital platforms.

With that in mind, Latinográficas 2022 will include an "algorithm hacking" segment to provide scholars with tools to maximize the likelihood that digital platforms' algorithms will work in favor of journalistic content.

"The de-prioritization of journalistic content in general by digital platforms, the famous algorithm changes that de-prioritize news information, are our first challenge," Sebastián Auyanet, program coordinator of Latinográficas, told LatAm Journalism Review (LJR). “This forces journalism to adapt to these ways of communicating. Five or ten years ago, you could post links on social media and you had a very broad audience that would at least see them and might be willing to click on them. Now this is no longer the case, so you have to compete at another level.”

One of the weakest points for fellows in previous editions of Latinográficas was knowing how to efficiently place content on social media and achieve a better distribution of the content produced by journalists. So, we decided to address this year the issue of digital visibility of content in greater depth, Auyanet said.

Sara Campos, product editor at El Surti, will be in charge of teaching the specialized workshop on how journalists can positively relate to the social media audience and the constraints imposed by algorithms. The idea is for fellows to take back to their newsrooms the concept that the distribution of visual journalism content is as important as story design and information selection.

"It's part of the publishers' job to figure out how to navigate those algorithms," Juan Heilborn, visual editor at El Surti, told LJR. "Algorithms are constraining factors that determine our work and we have to get used to adjusting quickly to them. I am sure that graphics will always have its place in journalism and in the audience, but you have to navigate with this constraint, work with it and take time to think about it and do trial-and-error."

The effort to optimize the distribution of visual journalism content on digital platforms is influenced by factors ranging from copy size to image resolution. According to Auyanet, the goal of journalists should not be to adapt 100% to what algorithms dictate, but to put themselves in the best possible position for the content to be seen, so that it has a better chance of being consumed by the audience.

Latinográficas is an opportunity for El Surti to share with journalists from all over the region the methodology that has made it a benchmark for visual journalism in Latin America. Its co-founder Alejandro Valdez defines it as a methodology to "transform information into action." In other words, it’s journalism that monitors power and tells the stories of those who confront it, in order to seek solutions to local and global problems.

El Surti's graphic style, which has won awards such as the Gabo Prize in Innovation in 2018 and the Global Youth & News Media Prize in 2019, is based on the idea that all the information on a topic should be able to fit on a "poster," as they call their graphic pieces that synthesize information visually. Over the course of 11 Latinográficas sessions, the El Surti team works directly with the grantees sharing best practices of that style.

"We work a lot on the practical end, on the feedback to pieces and also on sharing the approach of El Surti. When it comes to dealing with certain topics there is also contact with the editorial staff, which is something we want to develop a little more this year," Auyanet said. "Thinking about how to present it, how to work from the font selection for the letters, to the color palette, etc. These are things that are very difficult to deliver as a template. You have to do it by working alongside the people who do it continuously."

The call for submissions to the third edition of Latinográficas will close on Aug. 4. Journalists, illustrators and designers who have the support of a news outlet can apply. In addition to the virtual sessions and master classes, those selected will receive a US $1,000 scholarship.

The 2022 edition of Latinográficas will be dedicated to climate change from the perspective of disinformation, but also from the point of view of the violence suffered by journalists and activists who denounce environmental conflict in Latin America.

The environmental crisis is one of the main points on El Surti's agenda, so, through the program, the news outlet seeks to share lessons learned throughout its coverage of the issue and the follow-up it has carried out with victims of the environmental struggle in the region.

"We believe that the media in the region, unlike other regions, need a boost on these issues. Like many things in Latin America, sometimes science and anti-disinformation journalism lags behind," Heilborn said. "Although there are projects of high quality, it is difficult for them to reach mainstream media. We think it is worth trying to promote visual journalism on this topic, we believe we have something to say".

The keynote address by Natalia Viana, co-founder and co-director of the investigative journalism site Agência Pública, will talk about the issue of how disinformation intersects with the phenomena of climate change in journalism.

In addition, aligned with the theme, Latinográficas chose this year as a media partner Tierra de Resistentes, a collaborative and cross-border journalism initiative that investigates phenomena of violence against environmental defenders in Latin America.

Tierra de Resistentes is a multimedia platform with a database of aggressions against environmental leaders and their communities, and 29 in-depth feature stories. This effort is coordinated by Consejo de Redacción, an association of journalists based in Colombia that promotes investigative journalism, and is supported by the Deutsche Welle Akademie (DW) and the German Cooperation Agency.

The initiative is made up of a team of 50 journalists, developers, photographers and videographers from Argentina, Bolivia, Brazil, Colombia, Ecuador, Guatemala, Honduras, Mexico, Peru, and Venezuela.

"We felt that Tierra de Resistentes was a perfect fit for the journalistic project, for the size of the media with which we wanted to collaborate and for the content it generates, which deserves a second effort in terms of format, of translation to other audiences," Heilborn said.

As part of the journalistic collaboration alliance, Latinográficas 2022 fellows will produce pieces with different visual formats based on Tierra de Resistentes feature stories, which will be published by both El Surti and the platform.

In previous editions, Latinográficas partnered with Salud con Lupa, from Colombia, and Chequeado, from Argentina.

"We always grab allied media to disseminate journalistic content in other ways, in other formats," Heilborn said. "We want to have different and diverse allied media."

Through the relationship with these allied media and the fellows, both from this and previous editions, El Surti aims to consolidate a community of practice around visual journalism.

This community consists so far of 17 members from the 2020 and 2021 cohorts, and will be joined by a maximum of eight journalists who will be selected this year. Surti maintains a close relationship with Latinográficas participants, through a newsletter, invitations to events, lectures and as participants in user research to improve the experience of future programs. 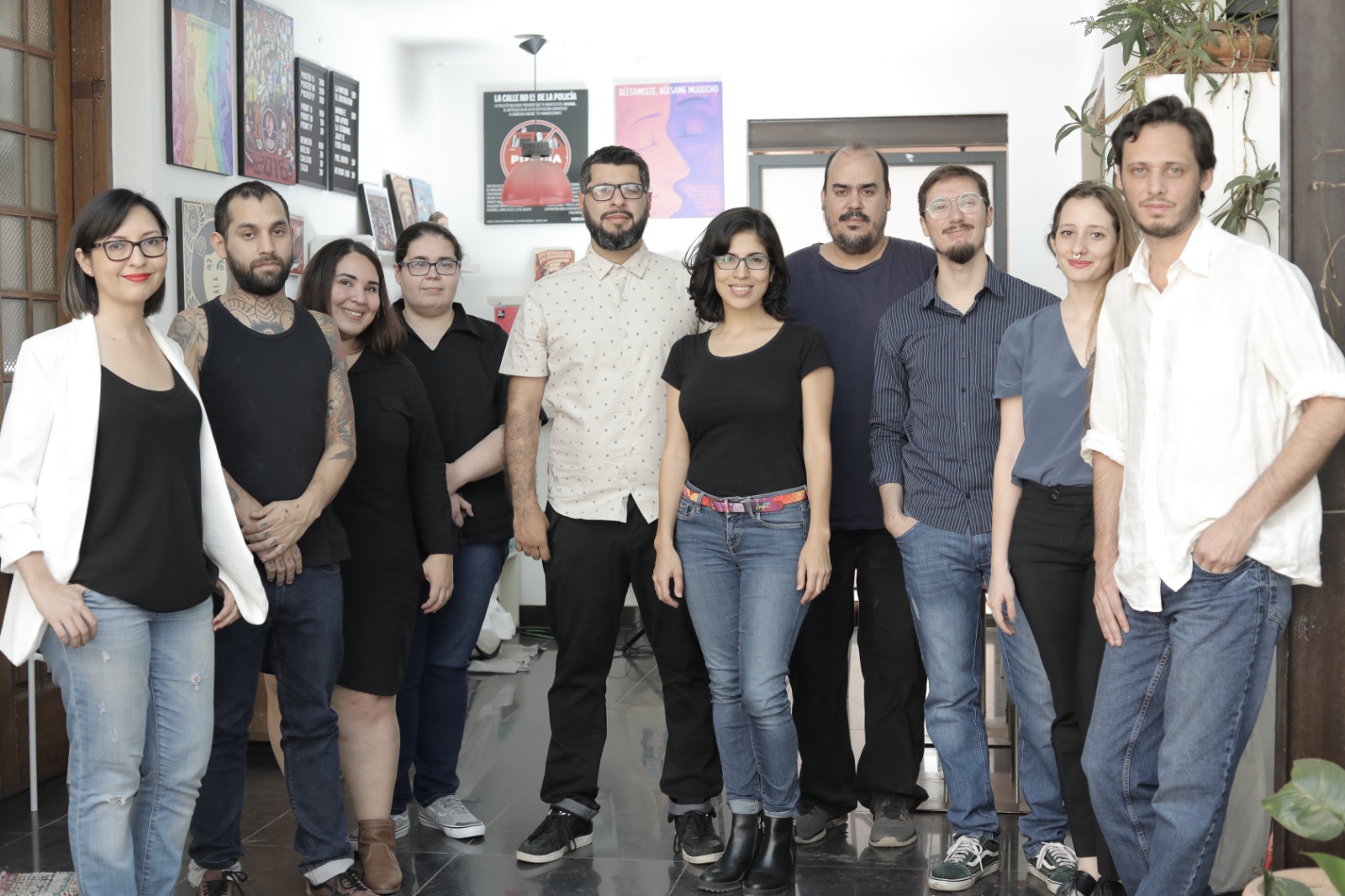 As part of the initiative, the El Surti team works directly with Latinográficas participants sharing best practices behind the visual style of the media outlet. (Photo: courtesy of El Surti)

"We aim for Latinográficas to become a constant remote education program," Auyanet said. “Both the people who are part of the program itself, as well as those who apply but don't get in, the idea is also to be close to these people through a community, to share knowledge and best practices, which is also what we aim to achieve this year.”

The ultimate goal is to turn Latinográficas into what Escola de Dados is for data journalism, or what LatAm Chequea is for fact-checking: collaborative networks of regional knowledge and practice to strengthen a specific area of journalism, Auyanet said.

"Maintaining a community on a consistent, ongoing basis requires a number of things that we're building a little bit at a time," he said. "We're aiming to grow the program that way. We'll figure it out as we go along."