Violence against journalists in Mexico is not new. For years, the country has been identified as one of the most dangerous places to practice journalism.

The country has witnessed an increase in violence against media in just 10 days. Three journalists were killed in different states, one more is missing and in videos spread on the internet, it’s possible to hear shots ring out during coverage of a protest against femicides. 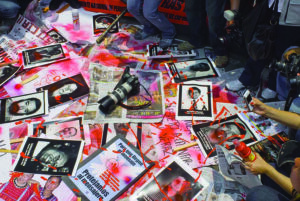 A 2010 protest in Mexico City against the murders of journalists (Knight Foundation, CC BY-SA 2.0)

However, press advocates in the region see few connections between the recent spikes aside from overall violence in the country and prevailing impunity in the murders of journalists.

“The cases of the last 10 days, the three homicides, I don't see them connected to a specific trend. Beyond the general trend that it is a deterioration of press freedom in Mexico and that it was already happening […] I do not think it is due to any reason other than the fact that three criminal groups in three different cities found it necessary or convenient to kill a journalist,” Javier Garza, a Mexican journalist and security specialist, explained to LatAm Journalism Review (LJR).

“The fact that there are three [homicides] in such a close time period is only an indicator of impunity, of people who believe they can kill a journalist and get away with it perfectly. They are connected by the fact that the perpetrators felt protected by impunity, because nothing happened to the last ones who did this, so they have good reason to think that they are going to get away with it. What it shows you is that press freedom continues to deteriorate and that it has not stopped,” Garza added.

Mexico, widely regarded as the most dangerous country for journalists in the Western hemisphere, ranks sixth globally in the 2020 Global Impunity Index from the Committee to Protect Journalists (CPJ).

In Latin America and the Caribbean as a whole, 78 percent of the murders of journalists that occurred between 2006 and 2019 remain unsolved, according to UNESCO.

For Jan-Albert Hoosen, CPJ representative in Mexico, the high levels of impunity are precisely the reason for this increase in violence against the media.

“Really, the only connection there is between all these murders is the fact that impunity in Mexico is not being addressed by the government,” Hootsen told LJR. “And this is a problem that we’ve been talking about for a very long time, it hasn’t begun with the [Andrés Manuel] López Obrador government. But this is basically what happens if you allow the cycle of violence and impunity to spiral out of control. You get an increasing number of murders, you get an increased frequency of murders, because the people who want to hurt journalists know that they can get away with it, that’s why they do it. That’s the main reason why this keeps happening.”

Although Garza considers that there is no violence from the federal government under López Obrador, there has been an increase during his administration.

Article 19 Mexico counts at least 16 killings of journalists during the nearly two years of López Obrador’s administration that were related to the individuals’ professional work. The organization recorded 47 murders during Enrique Peña Nieto’s six years in office.

"I do not see it as committed. López Obrador is missing the second half of his speech. He says ‘I am very respectful of press freedom and my government is very respectful of press freedom.’ And we can say that in the strict sense, yes, Why? Because at the end of the day, stories are published, there have been no cases of censorship, aberrant cases, there have been no cases since the Presidency of the Republic ordered the dismissal of a critical journalist,” Garza said. “But that's one part of the equation. The other part of the equation is for him to have his government investigate and punish the cases in which other actors are the ones who are attacking press freedom.” 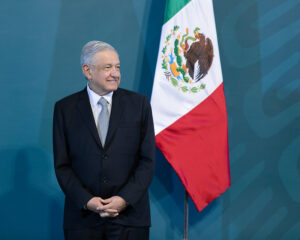 According to Garza, the government has not done much to make use of the tools it has to combat impunity for crimes against journalists. One of these, Garza explained, is to attract crimes against journalists so that the Attorney General's Office can investigate them. "Precisely to take away from local governments the task of investigating because in many [cases] local governments are in collusion," Garza said.

“Really the government is failing across the board in providing significant protection and providing the guarantee that if a journalist is hurt, that a proper investigation will be carried out,” Hootsen said. “So that’s really problematic. Even though the government has at least verbally said that they would no longer allow attacks against reporters, that they would address the issue, they’re really not doing it.”

For Garza, another fact that is not in accordance with the government's obligation to "avoid and end impunity" has to do with the reduction of funds to the federal protection mechanism.

On Oct. 21, the Congress of Mexico approved the elimination of 109 trusts that financed different organizations and programs, including the Fund for the Protection of Human Rights Defenders and Journalists.

Different civil society organizations, as well as the National Human Rights Commission (CNDH) and the Ministry of the Interior (Segob) expressed their concern about the disappearance of the Trust that supports the protection mechanism.

Three murders, one disappearance and journalists hurt while reporting 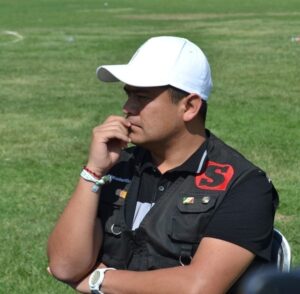 Mexican journalist Israel Vázquez was killed on Nov. 9 in the municipality of Salamanca. (Facebook)

The most recent murder occured on Nov. 9 when journalist Israel Vázquez Rangel, reporter for El Salmantino, was shot in the municipality of Salamanca, Guanajuato state, while he was reporting. The journalist arrived at the scene to report after being notified of the discovery of human remains. That’s when he was attacked by armed people who then fled, as reported by Animal Político. Although he was transferred to a hospital, he died hours later as a result of his injuries.

“El Salmantino is a local digital site founded in 2014 that has faced information blocking and smear campaigns during several municipal administrations, due to its coverage of political and security issues. It is necessary to remember that Salamanca is located in the industrial corridor, a space for the disputes of drug cartels," reported Article 19 Mexico.

A week before Vázquez’s murder, on Nov. 2, Jesús Alfonso Piñuelas was killed in the municipality of Cajeme in the state of Sonora. The journalist had worked as a cameraman in different media, but also published on his social networks and had a Facebook page, “El Shok de la Noticia.”

The Attorney General of the State of Sonora reported on Nov. 6 that it apprehended Francisco Bernardo “N.”, “El Foca,” as the person responsible for the murder. “El Foca” opted for an abbreviated trial, receiving 25 years in prison, as reported by El Sol de Hermosillo. As CPJ pointed out, no motive for the murder was addressed.

Earlier, on the night of Oct. 29, Arturo Alba Medina, presenter of a newscast on Multimedios Televisión and spokesperson for the Technological Institute in Ciudad Juárez, was killed in the state of Chihuahua. The journalist was in his vehicle after finishing his shift in which he had reported on alleged cases of corruption and crime within the police. 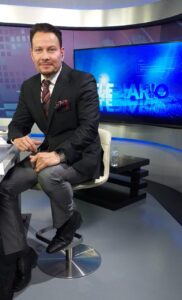 Broadcast journalist Arturo Alba was killed on Oct. 29 in the state of Chihuahua. (Facebook)

The Attorney General of the State of Chihuahua reported that “elements of the Special Unit for the Investigation of Crimes Against Life - Northern Zone are working in coordination with the Office of the Special Prosecutor for Human Rights through the Unit for the Protection of Journalists and Human Rights Defenders, to solve the incident” and that no line of investigation will be ruled out. It also pointed out that at least two people had participated in the crime.

In one of the most violent responses by public officials, in Cancún, Quintana Roo state, at least two journalists were injured after security forces fired shots to disperse a march against feminicide on the night of Nov. 9. Roberto Becerril, from La Verdad, was wounded in the shoulder when he was hit by a bullet and Cecilia Solís, from Radio Turquesa, was shot in the foot, according to El País.

The Office of the UN High Commissioner in Mexico condemned the excessive use of force and weapons by municipal police in this event and added that it was necessary to investigate the operation. Authorities said they had instructed the public force not to use weapons in the protest, El Universal reported.

The disappearance of journalist Víctor Manuel Jiménez was also recently reported. He was seen for the last time on Nov. 1 in the municipality of Celaya, Guanajuato state. Jiménez is the creator of the pages Digital Noticias and Rotativa Digital Guanajuato, according to Article 19 Mexico.

According to his relatives, there has been a complaint before the public prosecutor since Nov. 4, but there is no news of the journalist, La Silla Rota reported.

This article was written with collaboration from Teresa Mioli.