Why is press freedom important to Latin American journalists? We asked, and this is what they said.

Journalists and press freedom advocates around the world celebrate May 3 as World Press Freedom Day.

To mark the occasion this year, LatAm Journalism Review (LJR) decided to revive a social media campaign in which we ask journalists from Latin America a simple question: “Why is press freedom important to you?”

We previously asked journalists from the region to share their thoughts to celebrate World Press Freedom Day in 2019 and 2016.

For its celebration, the UNESCO World Press Freedom Day Global Conference, which is taking place in Punta Del Este, Uruguay from May 2 - 5, is focusing on the theme “Journalism under Digital Siege.” The celebration will discuss the “digital era’s impact on freedom of expression, the safety of journalists, access to information and privacy.”

We gave journalists we spoke with the option to generally answer why press freedom is important to them, or tailor their responses to questions of press freedom and the digital era.

This is what the press professionals we spoke to from across the region had to say: 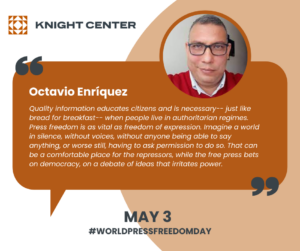 "Quality information educates citizens and is necessary-- just like bread for breakfast-- when people live in authoritarian regimes. Press freedom is as vital as freedom of expression. Imagine a world in silence, without voices, without anyone being able to say anything, or worse still, having to ask permission to do so. That can be a comfortable place for the repressors, while the free press bets on democracy, on a debate of ideas that irritates power." - Octavio Enríquez (Confidencial, Nicaragua) 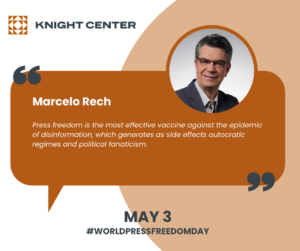 "Press freedom is the most effective vaccine against the epidemic of disinformation, which generates as side effects autocratic regimes and political fanaticism." - Marcelo Rech (ANJ, Brazil) 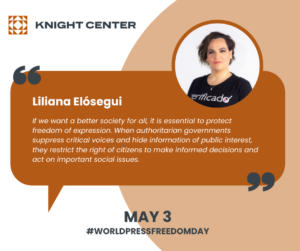 "If we want a better society for all, it is essential to protect freedom of expression. When authoritarian governments suppress critical voices and hide information of public interest, they restrict the right of citizens to make informed decisions and act on important social issues." - Liliana Elósegui (Verificado MX, Mexico) 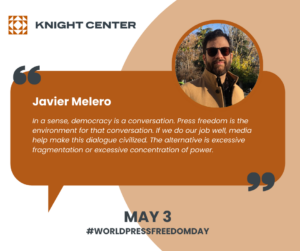 "In a sense, democracy is a conversation. Press freedom is the environment for that conversation. If we do our job well, media help make this dialogue civilized. The alternative is excessive fragmentation or excessive concentration of power." - Javier Melero (El Pitazo, Venezuela) 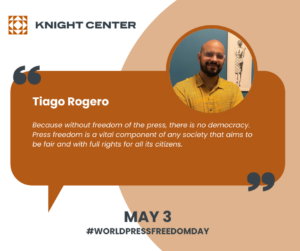 "Because without freedom of the press, there is no democracy. Press freedom is a vital component of any society that aims to be fair and with full rights for all its citizens." - Tiago Rogero (Rádio Novelo, Brazil) 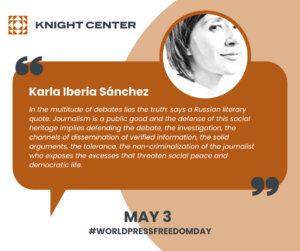 "In the multitude of debates lies the truth: says a Russian literary quote. Journalism is a public good and the defense of this social heritage implies defending the debate, the investigation, the channels of dissemination of verified information, the solid arguments, the tolerance, the non-criminalization of the journalist who exposes the excesses that threaten social peace and democratic life." - Karla Iberia Sánchez (TelevisaUnivisión, Mexico) 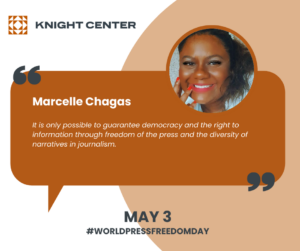 "It is only possible to guarantee democracy and the right to information through freedom of the press and the diversity of narratives in journalism." - Marcelle Chagas (Rede JP, Brazil) 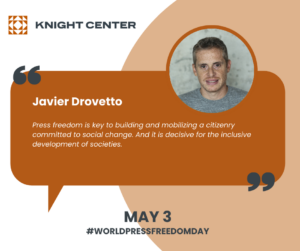 "Press freedom is key to building and mobilizing a citizenry committed to social change. And it is decisive for the inclusive development of societies." - Javier Drovetto (RED/ACCIÓN, Argentina) 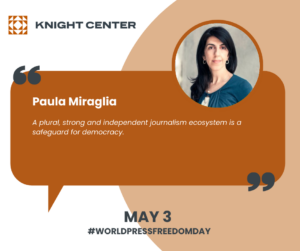 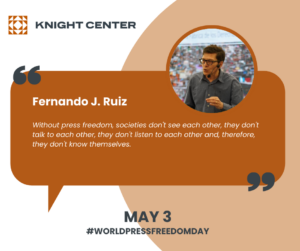 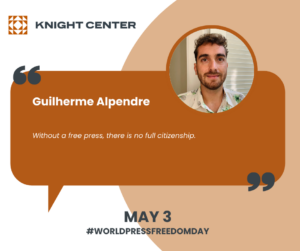 "Without a free press there is no full citizenship.” - Guilherme Alpendre (Ajor, Brazil) 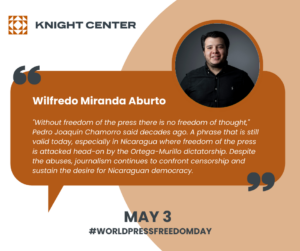 "'Without freedom of the press there is no freedom of thought,' Pedro Joaquín Chamorro said decades ago. A phrase that is still valid today, especially in Nicaragua where freedom of the press is attacked head-on by the Ortega-Murillo dictatorship. Despite the abuses, journalism continues to confront censorship and sustain the desire for Nicaraguan democracy." - Wilfredo Miranda Aburto (Divergentes, Nicaragua) 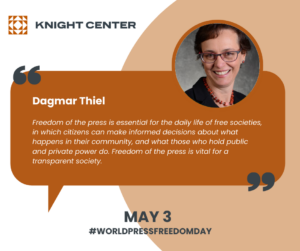 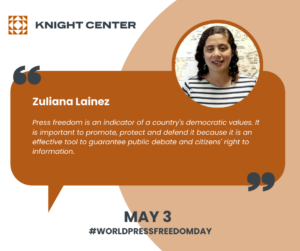 "Press freedom is an indicator of a country's democratic values. It is important to promote, protect and defend it because it is an effective tool to guarantee public debate and citizens' right to information." - Zuliana Lainez (ANP Peru) 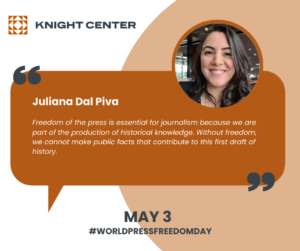 "Freedom of the press is essential for journalism because we are part of the production of historical knowledge. Without freedom, we cannot make public facts that contribute to this first draft of history." - Juliana Dal Piva (UOL, Brazil)