In Brazil, one of the ten countries with the highest rate of impunity in crimes against journalists worldwide, three bills underway in Congress propose to toughen the criminal treatment of perpetrators of violence against journalists and press professionals.

The most recent of these is bill 1.838/2019, presented in the Chamber of Deputies on March 28 by federal deputy Roberto Pessoa of the Brazilian Social Democracy Party (PSDB, for its initials in Portuguese) of the State of Ceará.

The bill intends to change the Law of Heinous Crimes (law 8.072/1990) to classify "as heinous the crime committed against the life, security and physical integrity of the journalist and press professional in the exercise of his activity.” 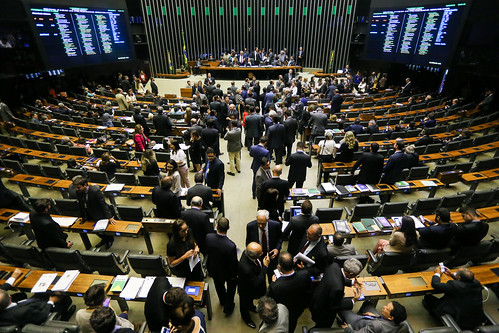 Among the types of crimes classified as heinous in Brazil are homicide, robbery resulting in death, rape and feminicide. The law determines harsher punishments for those who carry out this type of crime, in addition to prohibiting the possibility of amnesty, grace, pardon or bail.

Deputy Pessoa called his initiative "Law Tim Lopes" in honor of the TV Globo reporter who was murdered in Rio de Janeiro in 2002 while conducting an investigative report in the favela of Vila Cruzeiro.

The deputy’s State has been highlighted as one of the most violent for journalists in Brazil in recent years. A report from Article 19 on violations against communicators in 2017 pointed out that Ceará had the highest number of serious violations recorded in the country that year (seven), including two communicators who were murdered because of their profession, as recorded by Article 19.

Deputy Pessoa told the Knight Center that his State is an example of how journalists are "totally exposed" and vulnerable to violence in the country. He considers that the press "is a master pillar of democracy" and that his proposal is "a further safeguard of journalists' lives."

“The bill protects, because whoever wants to kill will know that it is a heinous crime, with a greater penalty. It is a project in defense of democracy," he said.

Pessoa said he will talk to the leadership of his party to ask for support for the project, as well as from the other PSDB parliamentarians. He also said that he will meet personally with the president of the Chamber of Deputies, Deputy Rodrigo Maia (PMDB/RJ), to request that the bill be put on the agenda for consideration and vote in the legislative house.

On Feb. 21, a similar bill was presented by Júnior Bozzella, federal deputy for the State of São Paulo and for the Social Liberal Party (PSL) - the same of the president of the country, Jair Bolsonaro, notorious for the rhetoric hostile to the press and journalists who produce coverage critical of his actions.

Bill 1.052/2019 proposes "to classify as heinous the crime committed against the life, security and physical integrity of the press professionals in the function of broadcaster and journalist in the exercise of their function.”

The proposal was joined to bill 7107/2014, by Federal Deputy Domingos Sávio, from the PSDB of Minas Gerais, which deals with the same subject and is in the Commission of Constitution and Justice and Citizenship (CCJC) of the Chamber, awaiting the appointment of a rapporteur.

In the Senate, a bill by Senator Acir Gurgacz of the Democratic Labour Party with the same proposal is in the pipeline. The Senate bill 329/2016 also proposes to "insert in the list of heinous crimes the homicide committed against a journalist, because of his profession" and awaits the appointment of a rapporteur in the Commission of Constitution, Justice and Citizenship of the legislative house.

The bills from deputies Roberto Pessoa and Júnior Bozzella present in their justifications data from the 2018 Global Impunity Index of the Committee to Protect Journalists (CPJ), which puts Brazil in tenth place in the world ranking of impunity in crimes against journalists and third in Latin America, behind Mexico (7th place) and Colombia (8th). According to CPJ, at the end of last year Brazil had 17 unpunished cases of murders of journalists.

For Emmanuel Colombié, regional director for Latin America of Reporters Without Borders, the proposals to make violence against journalists a heinous crime are "interesting," but they are isolated initiatives that do not solve the problem.

"It is important to be clear that the security of communicators and, ultimately, the exercise of freedom of expression, will not be guaranteed just by punishing those involved in crimes. A strategy that privileges prevention more than punishment is very important. Both things must go together. The problem of impunity has to be seen in a more comprehensive picture. In Brazil, there is a lack of a real risk prevention policy," Colombié told the Knight Center.

The regional director listed several priority measures that must be taken by the Brazilian authorities to strengthen the security of communicators and ensure criminal prosecution and punishment of those who attack them.

These include training of investigators to work on cases of violence against communicators and the development of specific protocols for investigating such crimes; greater integration between communicators and media organizations and civil society organizations to understand and prepare for the risks of covering certain issues in particular regions; articulation between local authorities and the federal government; and greater transparency of the authorities in the investigations and the developments of the cases.

Colombié also recalled that in Brazil the communicators most vulnerable to violence are radio journalists who work in small cities, far from the big centers, and who investigate local corruption, and that this context is also an obstacle to the resolution of crimes and the accountability of those responsible. "It is important that there is real commitment from the local authorities so that the investigation can be carried out in a complete and professional manner, and for that to happen, there cannot be any corruption [locally]. And that's a problem," he said.