Brazilian President Jair Bolsonaro’s threat of physical violence against a journalist who asked him a question puts the conflictual relationship that the president has had with the press since before becoming president on a different level. This assessment comes from press freedom organizations in Brazil. 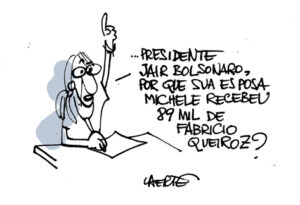 The question that made Bolsonaro threat of aggression a reporter went viral on social media. Cartoon: Laerte Coutinho

On Sunday, Aug. 23, Bolsonaro said that "my wish is to fill your mouth with a beating" to a reporter from O Globo newspaper who went to the president's visit to the Cathedral of Brasilia. The journalist had asked about an investigation by the Rio de Janeiro Public Prosecutor's Office that would have identified suspicious deposits of $89,000 Real, roughly $16,000 U.S. dollars, to First Lady Michelle Bolsonaro’s personal bank account.

“Unfortunately, Jair Bolsonaro's brutal and irresponsible discourse can encourage and legitimize attacks by his militants against reporters, as in the cases of the photographer pushed from a ladder by militants in Brasília and the cameraman who had his finger broken by a Bolsonaro supporter in Minas Gerais General,” Marcelo Träsel, president of the Brazilian Association of Investigative Journalism (Abraji), told LatAm Journalism Review.

Abraji, Article 19, Conectas Human Rights, OAB Press Freedom Observatory, and Reporters Without Borders condemned the president’s discourse in a statement and demanded that the Legislative and Judiciary branches take action.

“Such unacceptable behavior on the part of a president of the Republic should be condemned by all institutions and citizens committed to Brazil’s stability and progress. The undersigned organizations expect overall from leaders of the Legislative and Judiciary Powers a strong action against yet another violent and irresponsible attitude by Jair Bolsonaro,” the release stated.

Maria José Braga, the president of the National Federation of Journalists (Fenaj), said that the organization recorded 245 attacks by the president on journalists from January to June of this year.

“Today's statement, in addition to being crude and disrespectful, is yet another attempt to intimidate the press. And, as has often happened, it is a form to incentivize his followers to also attack and threaten professionals,” Braga told LJR.

After Bolsonaro's threat of aggression, the same question asked by the Globo reporter to the president went viral on social media, "President @jairbolsonaro, why did your wife Michelle receive R $89,000 from Fabrício Queiroz?"